Evelyn Skye, author of CIRCLE OF SHADOWS, on previous writing being part of the journey

We're delighted to have Evelyn Skye join us to chat about her latest novel, CIRCLE OF SHADOWS.

Evelyn, how long did you work on CIRCLE OF SHADOWS?

This book took me a while. I wrote the first draft back in the winter of 2014, when my agent was pitching THE CROWN'S GAME to publishers. I needed something to keep my mind occupied so that I wouldn't obsess over whether or not any editors would like THE CROWN'S GAME, so I made myself start a new project.

CIRCLE OF SHADOWS was inspired by ninja lore, but those old stories were almost always about boys or men. I thought it would be fun to write a ninja-inspired story with a girl at its center, and with a heavy dose of magic, mischief, and wisecracks to boot.

When my editor and I finally re-opened CIRCLE OF SHADOWS, we found that the first draft was not the story that really needed to be told. It took a while to tease it out--during which I threw out the entire first manuscript, wrote a new one, and tossed many, many of those words away, too--but in the end, I wrote the characters and the story that my readers deserved. At least, I hope I did!

It taught me that I should really learn how to outline! I am such a pantser (meaning I don't plan ahead and I write by the seat of my pants). I love how pantsing allows the characters to take me where they want to go, but unfortunately, they sometimes go in the wrong direction, and then I end up trashing months of work and starting over.

I'm working on the sequel to CIRCLE OF SHADOWS now, and my editor had me outline it, which was a hard thing for me to do, but it made the actual writing of the book so much easier. My goal is to try to outline my next book after this series, and maybe this whole planning-ahead-thing will stick. We'll see!

I wrote seven or eight full manuscripts (I've lost count) before I was published, and I'm on my second agent. Those manuscripts will never see the light of day, and I'm okay with that, because I'm a much better writer now than when I started. All my previous work was part of the journey; I learned from it, and those manuscripts got me to the point where I could land two duology deals with a major publisher.

Don't get me wrong--in those years when I was writing and not even getting any interest from agents, I didn't know if I'd ever make it. It was like treading water without knowing if a ship was ever going to come by to pick me up. But I also knew that I loved writing like I had never loved any other work before, and I couldn't give that up. Plus, a fortuneteller told my mom I'd be successful, so that didn't hurt in keeping me going, haha.

If I could give any advice to other writers, it would be this: If you love writing, keep doing it. Keep reading books on craft, keep seeking out critiques from other writers, keep going to conferences, keep writing the gorgeous stories in your head, keep submitting to agents and editors, keep dreaming and striving and dreaming some more. Take breaks if you need to, whether it's a week or a year or a decade, but come back to writing when you love it again.

The reason I say this is that I was on the brink of quitting after eight unsuccessful manuscripts. I thought maybe writing was wrong for me. But then I threw myself into what I thought might be one last manuscript, and there it was... the story I'd been working toward all along. I got published. I achieved this crazy, amazing dream. And it was everything I had hoped it would be.

Best of luck to all of you. I can't wait to see your books on the shelves. 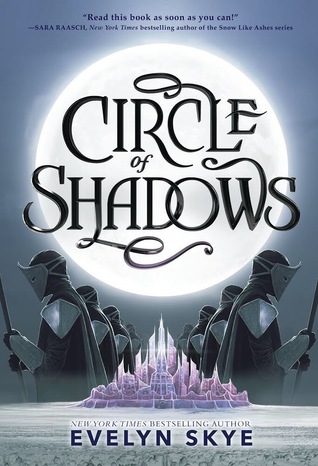 Sora can move as silently as a ghost and hurl throwing stars with lethal accuracy. Her gemina, Daemon, can win any physical fight blindfolded and with an arm tied around his back. They are apprentice warriors of the Society of Taigas—marked by the gods to be trained in magic and the fighting arts to protect the kingdom of Kichona.

As their graduation approaches, Sora and Daemon look forward to proving themselves worthy of belonging in the elite group—but in a kingdom free of violence since the Blood Rift Rebellion many years ago, it’s been difficult to make their mark.

So when Sora and Daemon encounter a strange camp of mysterious soldiers while on a standard scouting mission, they decide the only thing to do to help their kingdom is to infiltrate the group. Taking this risk will change Sora’s life forever—and lead her on a mission of deception that may fool everyone she’s ever loved.

Evelyn Skye is the author of New York Times bestsellers THE CROWN’S GAME and THE CROWN’S FATE. Her new series, CIRCLE OF SHADOWS, will be published on January 22, 2019.

Evelyn has a B.A. in Russian literature & history from Stanford University and a J.D. from Harvard Law School. She was once offered a job by the C.I.A., she not-so-secretly wishes she was on “So You Think You Can Dance,” and if you challenge her to a pizza-eating contest, she guarantees she will win. She can be found online at www.evelynskye.com and on Twitter @EvelynSkyeYA.

Have you had a chance to read CIRCLE OF SHADOWS yet? Do you outline your stories before writing? Does your love of writing keep you going? Share your thoughts about the interview in the comments!