Today, I'm so excited to welcome Tyler James Smith to Writers on Writing Wednesdays! He's tackling a daunting topic - failure. Don't miss this great post on how to deal with the inevitable failures that are often essential parts of success. Stay tuned after the post for a bit about Tyler and his wonderful book, UNSTOPPABLE MOSES (available now).

You are going to fail.

Someone who creates worlds and meaning out of dust and void.

And chances are, you will tell them about your officesalesretail day job and how you enjoy hiking, instead, and you are going to feel like you failed.

So then maybe you only tell your closest friends, and you decide to trust them with your story but then it kind of feels a little bit like showing off an actual transcript from an especially brutal therapy session and they just don’t seem to just get it. They don’t laugh where they’re supposed to laugh or, worse, they laugh where they aren’t supposed to and you feel like you failed.

And then maybe you finally edit that piece that has been handing you your ass for the last six months straight and you see every flaw and crack and blemish in it and you feel like you failed.

Maybe then you decide to write a manuscript—a book, a novel, a huge expanse of words—and it’s going so well…for the first fifteen-to-nineteen-thousand words, and all of the sudden everything is garbage. And when you haven’t touched the story you’d fallen so quickly in love with six months later, you feel like you failed.

And maybe you finish your story, but the next then is even worse: then the query letter: you are going to feel like you failed and also maybe jumped out of a moving vehicle. Because a query letter brings a plague of vicious friends and they are many, and they are called Form Rejection Letters.

And yes, you will feel like you failed with every last one of them.

You are going to fail and, chances are, you already have. You will likely lose track of the number of times you’ve failed and you’ll hear airy, smiley stories about how Fancy Published Author X chose two or three agents they liked and got The Call two-or-three-times over within three days, followed by a book deal that allowed them to be a Published Author full time.

You ugly-cry and wonder why you didn’t pay more attention in something like economics or biology since you’re pretty sure your uncle’s neighbor could get you a really comfortable, soul-strangling job downtown.

And you will not only like you failed, but that you failed for no reason. It will be very, very easy to feel like this isn’t supposed to be so hard.

Then something starts to happen.

You begin to realize that your writing is stronger than it was. That the sting from rejection doesn’t quite sting like it used to. When your inner circle (read: amateur therapist friends who should apply for sainthood) ask about your writing and you tell them that you are querying, they will cock their heads back a little and raise their eyebrows just a fraction of an inch and they’ll say something like, “Wow. That would be terrifying. I don’t think I could handle something like that.” They’ll say the same when they find out you’re still writing—writing a new story (while probably still editing a previous one), attempting another book, outlining for projects that are just sparks in the darkness.

Or they won’t care at all.

Or they’ll continue to tell you that you can’t do it.

But you aren’t who you were; you’ve come to find that you are bulletproof (read: your inner circle of vicious snake-friends will fall apart; they will lose their grip on you because you are finding out what you can handle and how to be who you want to be and they will quickly find that they are not part of your beautiful equation).

And then you get to realize something else, too: you failed your way into being a writer. And a decent one at that. Failing, it turns out, is the big gleaming secret.

To quote The Mountain Goats, “There’s gonna come a day when you feel better.” You won’t know when and it might be too glacial to notice in real-time, but you’ll turn around and see a swath cut through the earth, littered with rejection letters and snide, underhanded comments about how writing isn’t a real job, and you’ll be standing at the tapered end of it. You will have the proverbial thick skin that people told you that you needed for something as romantically doomed as being a writer. You will have scar tissue that you never even saw develop.

On a random Tuesday in the middle of some nobody month like March, you are going to realize that the big, lurking monster that kept telling you how catastrophic failure is has been desperately lying.

If there’s one thing monsters fear, it is those that refuse to stay beat.

The trick is in the black eyes and the busted lips.

The key is to be against the ropes over and over again and over.

The secret password is, “Is that all you’ve got?”

You are going to fail.

You are going to bomb.

And when people ask you what you do or who you are, you will spit an actual tooth out of your actual mouth and wipe the sweaty, muddy hair out of your face, and you will say the thing that has been true all along: You are a writer. 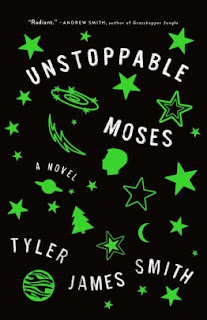 Moses and his cousin Charlie were best friends, wisecracking pranksters, unstoppable forces of teenage energy—until the night they became accidental arsonists and set in motion a chain of events that left Moses alone, guilt-stricken, and most likely trapped in his dead-end town.

Then Moses gets a lucky break: the chance to volunteer as a camp counselor for week and prove that the incident at the bowling alley should be expunged from his record. And since a criminal record and enrollment at Duke are mutually exclusive, he’s determined to get through his community service and get on with his life. But tragedy seems to follow him wherever he goes, and this time, it might just stop him in his tracks.
Amazon
B&N
Books-A-Million!
Powell's 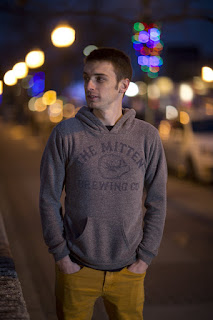 About Tyler James Smith
Tyler Smith was born and raised in Royal Oak, Michigan. A lot of typical kid-stuff happened, then he went to college at Western Michigan University, where he studied Creative Writing under and around people who were much smarter and more talented than he could ever hope to be. Funnier, too.

He tried to write a book about zombies when he was in college, then he wrote a bad NaNoWriMo book, then he tried to write another NaNo book but it fell apart around 20,000 words, then he started reading YA and fell in love with the genre which caused him to write a book at the speed of one chapter per week, and then he wrote his debut novel, Unstoppable Moses, which took three years to edit. While all of that was happening, he worked at various times as a mailman, as a freelance writer, as a deli punk, at a book store, as a bartender, and eventually as a SECA in Chicago Public Schools.