We're excited to have Tyler James Smith join us to talk about his debut novel, UNSTOPPABLE MOSES.

Tyler, what was your inspiration for writing UNSTOPPABLE MOSES?

Mostly it was the friendships I had when I was a kid that didn’t last like I thought they would. The inspiration was looking at these relationships that fell apart seemingly overnight and wanting to know why I was still thinking about them years and years later.

This book taught me about the talismanic power of writing. And not in the boring, garbage-filled, whimsical way you tend to hear—nothing about putting your soul to ink or bleeding at the keyboard. Instead, writing is an incredible way to unpack all of the things that you don’t understand about yourself. This book taught me that writing and therapy can look awfully similar.

That publishing—and writing, in general—isn’t half as romantic as movies make it out to be. Chances are you aren’t going to be a tortured genius with attractively disheveled hair bashing away at a typewriter while the muse whispers to you from the air vents. Real life is grimier and slower-moving and more often it’s you writing when you can find time. Real life is endlessly checking your email and working a day job because you can’t just crank out a first draft and punch it into a big envelope and expect your editor to wire you six figures.

How long did you work on UNSTOPPABLE MOSES?

On and off for close to two years.

It was brutal! I got The Call from my agent (the amazing and indefatigable Molly Ker Hawn) while I was working as a mail carrier back in February 2015 and we spent the next year, year-and-a-half editing. Went out on submission, got an offer about three months later from the brilliant Sarah Barley at Flatiron—an imprint of Macmillan. The path was long and uneven, but IT WAS SO EXCITING. I wouldn’t have had it any other way—everybody’s road is different.

Unstoppable Moses was my…third?...finished book. I wrote half of a terrible zombie book very early in college, then a complete NaNoWriMo book a little bit thereafter, then another half NaNo book the year after, followed by another half finished horror story, then my first YA, THEN I wrote Unstoppable Moses. By the time we sold it, I’d written another YA and started in on another.

Final Score for Unstoppable Moses: 3rd book out of 4 and 4-halves.

Nope. I’ve got a book deal and we’re working on future projects, but I’m still figuring out how to do it. Maybe that’s the secret, though: not looking for the key or the magic combination of words and just sort of loving the whole weird process.

When I’ve got time off (I work in the schools, so: weekends and big, beautiful admin-mandated vacations), I drink a lot of caffeine then dive into my project. This started in college and my theory was that I could train my brain like Pavlov’s dogs to associate caffeine-Nirvana with writing. That method probably gets a 3 out of 5 stars.

During the school year and during the week, I try to get a thousand words written at lunch.

I get more work done when I’m not at home and listening to music that doesn’t have lyrics (jazz, classical, orchestral, synthwave, etc.), though hip hop and classic rock are a great way to get amped up. Oh, and the Hamilton soundtrack.

What do you hope readers will take away from UNSTOPPABLE MOSES?

That it’s okay to grieve and hurt in a way that is completely unique to you. 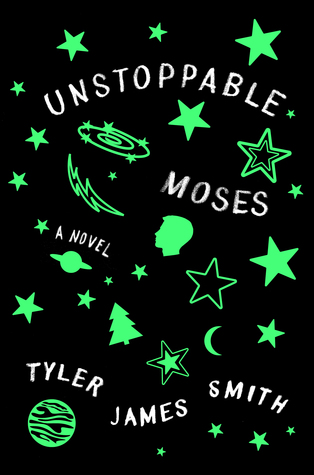 Moses and his cousin Charlie were best friends, wisecracking pranksters, unstoppable forces of teenage energy―until the night they became accidental arsonists and set in motion a chain of events that left Moses alone, guilt-stricken, and most likely trapped in his dead-end town.

Then Moses gets a lucky break: the chance to volunteer as a camp counselor for week and prove that the incident at the bowling alley should be expunged from his record. And since a criminal record and enrollment at Duke are mutually exclusive, he’s determined to get through his community service and get on with his life. But tragedy seems to follow him wherever he goes, and this time, it might just stop him in his tracks. Tyler James Smith attended Western Michigan University and after a stint as a mailman, is now an aide in a therapeutic school. He still uses AOL. Unstoppable Moses is his debut novel.

Have you had a chance to read UNSTOPPABLE MOSES yet? Does writing help you unpack all of the things that you don’t understand about yourself? Have you found writing to be less romantic than you thought it would be? Share your thoughts about the interview in the comments!