Jen Doll, author of UNCLAIMED BAGGAGE, on going back to the page

We're delighted to have Jen Doll swing by to chat about her latest novel, UNCLAIMED BAGGAGE.

Jen, what was your inspiration for writing UNCLAIMED BAGGAGE?

I moved from the suburbs of Chicago to Decatur, Alabama, in fifth grade. It was a massive cultural shift! Suddenly I had to learn to talk differently (using the word “y’all” instead of “you guys,” for a start), I had to make totally new friends, I had to navigate this new ecosystem I wasn’t even sure I wanted to know. We moved for my dad’s job, and I didn’t have much of a choice in the matter. Honestly, it wasn’t great at first. But slowly I started to fit in and find my place. I met my best-best-best friend, who is still my Best X3 friend, in 7th grade, and everything began to change. The heart of Unclaimed Baggage is the transformative power of friendship, and how finding your people is so, so important.

But also, the town I moved to had a store called Unclaimed Baggage! It’s a real thing, a store where airlines send luggage that’s never claimed, and it gets unpacked and resold to new people. (The one that was in my town has since closed, but the flagship store in Scottsboro, Alabama, still exists.) The idea of this store where lost things go to be found was a huge inspiration. Just think about all of those stories!

There are a couple of scenes in the book (I don’t want to spoil them, so you’ll have to read to find out) where really bad things happen to good people. I wanted to get those right, and it took a while to do that — several revisions, thoughts from my editor and close reader friends, reworking them over and over. I really hate it when bad things happen to my beloved characters! I want everyone to be happy and fine! But there’s hope in writing scenes like those that you’re helping readers who may have gone through similar things, and also doing something to try to make the world around you a little better.

I really love the opening when Doris is surrounded by all of these items in the store, narrating what it’s like to work there. And really all the store scenes, where the wildest things get found. Doris, Nell, and Grant discover something quite startling in a suitcase that turns them on the path of friendship. I love that one!

Some YA favorites: Eleanor & Park (I mean, honestly, everything Rainbow Rowell writes!), Jenny Han’s To All the Boys I’ve Loved Before, Leila Sales’ excellent novels, Jennifer Mathieu’s Moxie. I think what they have common is they’re all contemporary realism with sweetness and heart and great characters, but they’ll also challenge you to think about some bigger issues. Or at least that’s how I’d like people to think of my book!

How long did you work on UNCLAIMED BAGGAGE?

I think it was about 2 years from start to finish, maybe a little more, and it really changed a lot in that process. Books take some time to simmer before you get them right.

Be patient! Trying to get something done fast doesn’t make it better. And also, wow, there were some dark times when I didn’t think it could happen, I didn’t know why anyone had bought a book from me. But if you keep going back to the page, you’ll make it happen.

What do you hope readers will take away from UNCLAIMED BAGGAGE?

It’s OK to have “baggage.” We all do! Don’t believe anyone who tells you differently. But to extend the metaphor, you’ve kind of got to claim it. That’s when things start to change.

Hmm, I think I’m two for two right now. I wrote a novel for adults ages ago that never really went anywhere (it’s about a con artist who is himself conned, and there’s an Elvis impersonator, so make of that what you will). I’ve written another YA novel that’s still IN THE WORKS-slash-I’ve set aside for the time being.

I can only compare my road to publication to my own self, and I’d say it was hard, but I was lucky. As a writer for The Village Voice and The Atlantic (I’m still a working journalist), my name was out there in the world, and I found an agent, or he found me, pretty easily. My first book, Save the Date: The Occasional Mortifications of a Serial Wedding Guest, was published in 2014 and it was one of those books that sort of “wrote itself,” maybe because it was true!? But publishing is always challenging, and I’ve been rejected so many times, in numerous ways, whether we’re talking books or articles or other projects. The only thing to do is keep doing.

Hahahahah, no! I still don’t know what the key is. Ask me after my next one. :)

I have a pretty erratic schedule where I’m always working on several projects, freelance writing and books and even some editing, all at once. I mostly respond to deadlines. What has to get done immediately? Except I also hate rules and structure so I might work on the thing that’s due LAST, just because I feel like it. I like to have lots of things in the works; you build up energy for whatever you’re not working on that way.

I will occasionally vow to get up at 6 a.m. and work for 3 hours before the rest of the world wakes up, but that generally goes on for a day or two and then I fit in writing, as I fit in everything, when I can. I’m pretty much always working. But I love it, so that’s a success story, I think. Oh yeah, and I work from home, mostly, wearing my robe. Another success story? LOL.

I say this all the time, but the only way NOT to write a book or essay or article is not to write it. Open your computer, open the document, type on your keyboard, write in your journal, and something will start to come out. And from that, you make it better.

I have a 2-book deal with Macmillan, and I’ve started on that second book, which is about, thematically, how what you see is definitely not always what you get. 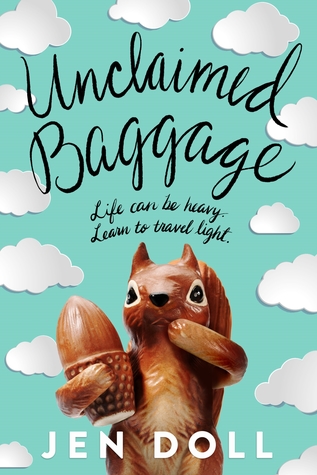 Doris―a lone liberal in a conservative small town―has mostly kept to herself since the terrible waterslide incident a few years ago. Nell had to leave behind her best friends, perfect life, and too-good-to-be-true boyfriend in Chicago to move to Alabama. Grant was the star quarterback and epitome of "Mr. Popular" whose drinking problem has all but destroyed his life. What do these three have in common? A summer job working in a store called Unclaimed Baggage cataloging and selling other people's lost luggage. Together they find that through friendship, they can unpack some of their own emotional baggage and move on into the future.

Jen Doll is the author of the debut young adult novel, Unclaimed Baggage and the memoir Save the Date: The Occasional Mortifications of a Serial Wedding Guest. She's written for The Atlantic, Elle, Esquire, Glamour, GQ, New York Magazine, The New York Times Book Review, Vice, The Village Voice, The Week, and many other publications. She grew up in Alabama and lives in Brooklyn.

Have you had a chance to read UNCLAIMED BAGGAGE yet? Are you able to be patient to make sure it's done better rather than fast? If you're stuck do you just start writing anything to make the words flow? Share your thoughts about the interview in the comments!