Donna Hosie, author of THE 48, on going from one POV to multiple

We're thrilled to have Donna Hosie here to tell us more about her latest novel, THE 48.

It was a long process. I wrote THE 48 in 2015. The book deal was announced in 2016. But once the deal was signed, my editor, who I’ve worked with on a number of novels and whose judgement I trust completely, requested that instead of one POV, the book contained three or four! That was daunting. I’ve written a 4-book series from a different character’s perspective for each book, but never the same story from multiple. I’ve seen other authors do it badly with all of the voices sounding the same, so it took another year and a half to get this just right.

What was your inspiration for writing THE 48?

THE 48 started off as a book about time travelling to the time of the Musketeers! (In fact a character from that first draft remains in the finished book and it will be pretty obvious to all when they read it.) Yet I wasn’t feeling the jeopardy. So I flipped the story to the Tudor Court and the time of Anne Boleyn and the story just flowed. It was such a dangerous time for women, but I wanted to also show women taking control of their own destiny, despite everything working against them.

The science behind the time travel was hard to write because cosmic strings and theoretical physics is not my thing at all. My head hurt trying to incorporate that into the start of the story! I love the scene where Anne and the others are executed. It’s witnessed by one of my time travelling assassins and I think it captures a grace in accepting death when faced with a monster (Henry). I also loved writing the character of Alex who falls in love with a Yeoman guard. He has a wit and charm that was very easy to write. It’s a heavy story emotionally and he adds some needed humour.

I wouldn’t call it long or hard when compared to some, although when you’re first starting out you feel like you’ll never get an agent or book deal. I got an agent for the second novel I ever wrote but she was hopeless! Best bit of advice I could give any writer: a bad agent is worse than no agent. I then indie published my third book and a month later signed with another agent for my fourth book. For a couple of years I was a successful hybrid while I continued to indie publish and traditionally publish. My choice, and indie publishing certainly helped me retain control over my words. THE 48 is my tenth novel and is traditionally published. 10 books in 6 years is a pretty good turnover.

What do you hope readers will take away from THE 48?

THE 48 is about choices - all of my books are. I’m not religious but there is a respect in my written words for those who choose to believe, and everyone, especially in this hateful world, should respect the choices of others to believe in whatever gives them comfort, joy and peace. 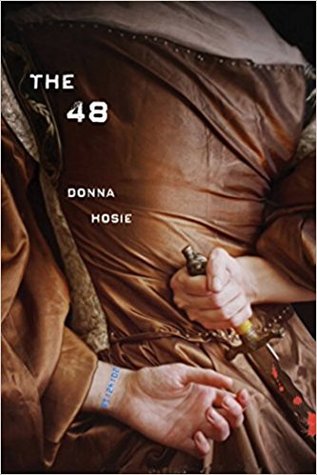 Twins Charlie and Alex Taylor are the newest time travelers recruited to the Forty-Eight, a clandestine military group in charge of manipulating history. The brothers arrive in 1536 feeling confident, but the Tudor court is not all banquets and merriment: it is a deep well of treachery, torture, lust, intrigue, and suspicion. The boys' mission to prevent Henry VIII from marrying Jane Seymour is further complicated when Alice, a fellow trainee, appears under mysterious and brutal circumstances--and when whispers of an uprising within the Forty-Eight reach their ears. Told in alternating perspectives among Charlie, Alex, and sixteen-year-old Lady Margaret, a ladies' maid to Queen Anne Boleyn with an agenda of her own, The 48 captures the sights, smells, sounds, and hazards of an unhinged Henry VIII's court from the viewpoint of one person who lived that history--and two teens who have been sent to turn it upside down.

Donna is also the author of THE RETURN TO CAMELOT trilogy, and THE CHILDREN OF CAMELOT series.

Have you had a chance to read THE 48 yet? Do you incorporate history into your novels? How many POVs have you used in one novel? Share your thoughts about the interview in the comments!