Devon Taylor, author of THE SOUL KEEPERS, on carrying an idea around for years

We're thrilled to have Devon Taylor stop by to tell us more about his debut novel, THE SOUL KEEPERS.

Devon, what scene was really hard for you to write and why, and is that the one of which you are most proud? Or is there another scene you particularly love?

There's a scene in the book where Rhett talks about his parents and what they were like when they were alive. He also recounts the car wreck that led to his and his parents' deaths. That scene was probably the hardest to write emotionally, as well as logistically. I labor over dialogue, trying to make it sound realistic, and this was a scene that really needed to feel authentic and true-to-heart. Hopefully it reads that way! The scene I'd say I'm most proud of, though, is the scene where Rhett witnesses the collection of a person's soul for the first time.

How long did you work on THE SOUL KEEPERS?

Like a lot of other writers, I did that thing where I carried the idea for THE SOUL KEEPERS around with me for a couple of years before I actually started drafting it. I'd written a few bits and pieces of the story, but mostly it was just daydreaming. It wasn't until after I quit my day job to be a stay-at-home dad that I really decided to try and put the work into writing the book. I started the first draft in September of 2016 and finished it in December. I tweaked that draft and submitted it to Swoon Reads in January 2017, without having let a single other human being read it. I took a huge gamble and, luckily, it paid off.

Despite the fact that I no longer sell health insurance from 10:30 AM to 7:00 PM five days a week, I still very much have a full-time job. So my writing routine starts early in the morning, at least a couple of hours before my wife and kids start stirring. It's just me, the computer, the cats, and a pot of coffee. I used to have nap-time also, but neither of my kids takes a nap anymore, which means that my mornings have to be as productive as possible. Sometimes I'll squeeze some extra words in at the end of the night, but I usually reserve that time of day for garbage television and a pint of ice cream with my wife. 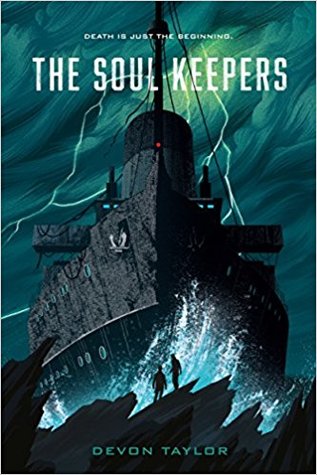 Death is just the beginning.

After dying in a terrible car accident, Rhett awakens in the afterlife and is recruited to join the crew of the Harbinger, a colossal seafaring vessel tasked with ferrying the souls of the dead. To where exactly, no one knows. But the crew must get the souls there, and along the way protect them from vicious soul-eating monsters that will stop at nothing to take the ship and all of its occupants.

Rhett and his new friends have a hard enough time fighting back the monsters that grow bolder and more ferocious every day. But then a new threat emerges, a demon who wants something that Rhett has. And if she gets it, it could mean the end of everything... for both the living and the dead. Devon Taylor was born in Las Vegas, Nevada and currently lives in Pennsylvania with his wife and two daughters. His day job consists of sneaking around the house with ninja-like stealth to avoid waking up his kids. When not writing, reading, or tediously typing out text messages with all the correct spelling and punctuation, he spends his time with his family. The Soul Keepers is his debut novel.

Have you had a chance to read THE SOUL KEEPERS yet? How do you make a scene feel authentic? Do you treat your writing like a full-time job? Share your thoughts about the interview in the comments!