Sandra Gulland on Teen Life Then and Now

I was thrilled when today’s guest agreed to do a post for us here at AYAP. I’ve spent a fair amount of time wondering about the teens of yesteryear and how their lives might compare to those of young people today. Who better than historical novelist Sandra Gulland to address this issue? Stay tuned after the post for more about Sandra and her latest book, the YA historical novel THE GAME OF HOPE. But now, here’s Sandra with “Teen Life Then and Now.”

Teen Life Then and Now
By Sandra Gulland

Many years ago, before becoming a writer, I was what was then called a "sponsoring book editor" for Methuen's school division in Toronto. One of my responsibilities was to think up projects and develop them (propose them to management, cost them out, find authors to write them, publish them).

For a time I was keen on developing a series of booklets showing what life had been like for teens at different periods in history. I began by going to the library and taking out a Young Adult biography, which just happened to be about Josephine Bonaparte. Captivated by her life story, I returned to the library the next day for more books about her. Over the following decade, my fascination with all-things-Josephine led to writing the Josephine B. Trilogy.

In 2000, the last of the trilogy was published. I sold my Napoleonic library in order to make room for books on the French court of the Sun King (specifically, on two of his mistresses). I figured that there were enough eccentrics and fascinating stories in this era to occupy me for the rest of my writing life. Two novels later and planning a third, I was once again blind-sided by Josephine — or rather, this time, by her daughter Hortense. This came by way of a proposal from Penguin for me to write a Young Adult novel about her.

After considerable deliberation, I agreed. My "Teens Through the Ages" series had come to naught, but I was still interested in what a teen's life might have been like in the past — especially a teen who had grown up during the horrors of the Terror and whose hero of a father had been guillotined. (Imagine!) And especiallyinterested in a teen whose widowed mother had married a scruffy, intense, and much-younger-man by the name of Napoleon.

I began by reading YA fiction — a lotof it. I was already a fan of YA, but now I was reading with intention: Fangirl by Rainbow Rowell, Flat-out Love by Jessica Park, The Rest of Us Just Live Here by Patrick Ness, Simon vs. The Homo Sapien's Agenda by Becky Albertalli, Between Shades of Grey by Ruta Sepetys, The Gentleman's Guide to Vice and Virtue by Mackenzi Lee ... for starters.

At the same time, I began my research. I already had extensive notes on Josephine and her world, but I needed to find out a great deal more about Hortense, and especially more about her boarding school. Who were her teachers? What was their daily schedule? What did the girls study? Were they graded? What did their uniforms look like? And so forth ...

One of the first things I do when beginning to write a novel is assemble a team of people I can turn to for help with research. Once a second draft is written I will put together another team for editorial, and after the seventh or eighth, yet another team — this last one of beta readers (teen readers in this case). Thoughout this long process I will reach out to consultants for help on specific subjects — medical, music, botany, etc. — depending on the story.

To assemble my initial research team for a YA novel about Hortense, I posted "help needed" notes on the Net to a French history list and a Napoleonic chat group. Several historians generously responded. These contacts provided me with fantasticdetails, and bit by bit Hortense's school life began to feel real to me, vivid, dynamic, and entirely unique.

Only about a third of my research — if that — makes it into a book, but that doesn't mean it's wasted. What's important is for me to feel grounded in that world as I write — and only details can do that.

Details and actual experience, that is. This is where travel research becomes a delightful necessity. Through exhaustive Google searches, I finally located the remains of Hortense's school (now a gated condo complex), and tracked down someone who could unlock the gates and show me in. It was worth it. Walking on the cobble stones Hortense had walked on made her all the more real.

There is a common belief that teenagers are a modern phenomena, in part because the word itself is relatively new. (According to etymonline.com— a wonderful free site for checking the historical use of words — the word "teenager" was first used in 1922, in reference to Sunday School classes.) I don't hold to this view. There is a universal stage of life that can be described as frisky, ardent, explorative and passionate: in other words, the puberty years. What wasdifferent in centuries past was how teens were schooled and employed. Girls were expected to marry "in the bloom of youth," for example (hopefully before they got pregnant). In the upper classes, marriages were like a business merger, negotiated and arranged by all the parents involved. Even so, girls fell in love-lust then, just as they do now. Their friends were their tribe, then and now.

The big difference, of course, was that there was very little allowed by way of boys and girls touching, much less heavy petting. (That didn't mean all teens behaved, of course.) Here's an example from Rules of Courtship, a book Hortense consults, modelled by me on advice books of the time:

1. He puts a shawl around your shoulders;

3. He helps you into a carriage;

4. He helps you climb stairs;

5. He takes your arm through his, to support you out walking.
I suspect that such touches were as sensually-charged then as what teens experience today.

At readings, I'm often asked how writing for young adults differs from writing for adults. In general, I found the process to be surprisingly similar. YA fiction generally demands intense narrative drive, but this is important in my adult fiction as well. There were certain things that I needed to explain for younger readers. I couldn't assume that a teen would know about the French Revolution, for example, so a little explanation was required. But basically, writing biographical historical fiction — or even a contemporary biographical novel, for that matter — involves deep immersion in the main character, "walking in her shoes." It doesn't really matter if the protagonist is fifteen or fifty. 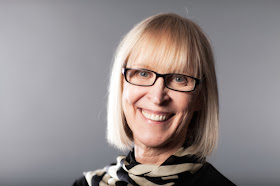 ABOUT SANDRA GULLAND
An American-Canadian, Sandra was born in Miami, Florida, and lived in Rio de Janeiro, Berkeley and Chicago before immigrating to Ontario, Canada, in 1970, where she and her husband cohabited with their two toddlers (now adults), two horses, a dog, three cats, twelve chickens and two pigs.

She is the author of six historical novels, including the JOSEPHINE B. TRILOGY, based on the life of Josephine Bonaparte, published in seventeen countries. Her latest novel, THE GAME OF HOPE, is a Young Adult novel about Josephine's daughter.

She and her husband now live half the year in Canada and half in Mexico. For more information about the author and her work, go to www.sandragulland.com. 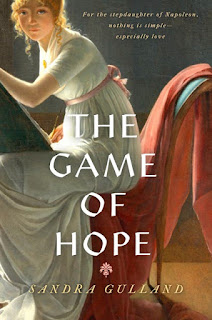 ABOUT THE GAME OF HOPE
For Napoleon’s stepdaughter, nothing is simple — especially love.

Paris, 1798. Hortense de Beauharnais is engrossed in her studies at a boarding school for aristocratic girls, most of whom suffered tragic losses during the tumultuous days of the French Revolution. She loves to play and compose music, read and paint, and daydream about Christophe, her brother’s dashing fellow officer. But Hortense is not an ordinary girl. Her beautiful, charming mother Josephine has married Napoleon Bonaparte, soon to become the most powerful man in France, but viewed by Hortense as a coarse, unworthy successor to her elegant father, who was guillotined during the Terror.

Where will Hortense’s future lie?

Inspired by Hortense’s real-life autobiography with charming glimpses of teen life long ago, this is the story of a girl chosen by fate to play a role she didn’t choose.