Sandra Gulland, author of THE GAME OF HOPE, on incorporating scenes from other novels

We're excited to have Sandra Gulland swing by to chat about her latest novel, THE GAME OF HOPE.

Sandra, what scene was really hard for you to write and why, and is that the one of which you are most proud? Or is there another scene you particularly love?

The hardest scene to write in THE GAME OF HOPE was the final scene, because so many story threads had to come together in a big way, and all at once. In writer-parlance, these are called "set pieces": major scenes with a lot going on in them. What's challenging is showing the big picture, but not confusing the reader.

At the same time, this scene had to include the same masquerade ball that appeared in TALES OF PASSION, TALES OF WOE, the second book in THE JOSEPHINE B. TRILOGY. In the TRILOGY, the ball is viewed from Josephine's perspective. In THE GAME OF HOPE, it's from the point-of-view of her daughter, Hortense. Needless to say, their experiences of that masquerade ball were entirely different.

Likewise, the scene had to jive as much as possible with the historical record. It took some research to find a credible reason why Hortense's love interest, Christophe Duroc, might be in attendance. So very important!

I had always meant to write a book "someday." When our two children were young, I set my alarm for one hour before they woke to do my writing. I also timed our coffee pot to begin brewing; the smell of the coffee helped lure me out of bed. After one year of "automatic" journal writing, I printed out the stack of pages, only to discover that what I had were hundreds of pages on the subject of exhaustion.

When I turned 40, I read a self-help book that suggested that one imagine what words would be on their tombstone. The horrifying words that came to me were: "She never got around to it." That was the point at which I realized that I had to begin writing immediately. The children were in school by then, so I gave my morning hours to writing a novel, and my afternoon hours to my freelance work, which was editing.

In this way, over a year's time, I had a manuscript about the end of the world. A nuclear holocaust wasn't that popular a subject at that time, so it got rejected again and again. In the drawer it went.

The following year was devoted to writing a contemporary comedy of manners/mystery about an elderly eccentric possessed by the spirit of Napoleon's first wife, Josephine. A scrap of a diary is discovered: Josephine's? Could it be? It was a mess of a plot. Writer Jane Urquhart, then Writer in Residence at the University of Ottawa, advised me to "just do the diary." That is: put 300 pages in the drawer and go with the 10 in the middle. "That's where the story comes to life," she said.

And so I did. I began Josephine's "diary," and about five years later, I had an agent, a publisher, and a contract to write two more novels to complete what had by then become a trilogy. I am thankful that my first two novels were never published because it would have spelled the end of my career.

I vividly remember one day, revising the first novel in the TRILOGY. By this time, I had read and reworked THE MANY LIVES & SECRET SORROWS OF JOSEPHINE B. many times over. There was one short chapter I loved; the prose sang! But this time, I realized that it just didn't fit and I ruthlessly cut it.

"I just cut my favorite chapter!" I announced to my husband. "I feel like a real writer."

Faulkner wrote, “In writing, you must kill all your darlings.” This was my realization of that truth. I've since learned that if a scene can be cut, it likely should be. I made one exception to this rule in THE GAME OF HOPE. I had cut one scene that seemed to serve no purpose — it was comic, but to what end? — but one of my young Beta readers loved that scene so much that I put it back in. It did serve a purpose after all: making readers laugh. :-) 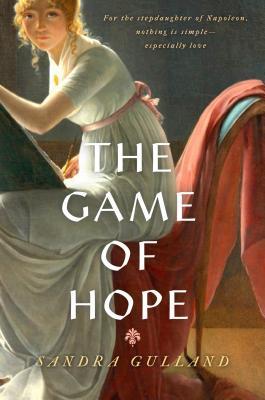 For Napoleon's stepdaughter, nothing is simple - especially love.

Paris, 1798. Hortense de Beauharnais is engrossed in her studies at a boarding school for aristocratic girls, most of whom have suffered tragic losses during the tumultuous days of the French Revolution. She loves to play and compose music, read and paint, and daydream about Christophe, her brother's dashing fellow officer. But Hortense is not an ordinary girl. Her beautiful, charming mother, Josephine, has married Napoleon Bonaparte, soon to become the most powerful man in France, but viewed by Hortense at the outset as a coarse, unworthy successor to her elegant father, who was guillotined during the Terror.

Where will Hortense's future lie? it may not be in her power to decide.

Inspired by Hortense's real-life autobiography with charming glimpses of life long ago, this is the story of a girl destined by fate to play a role she didn't choose.

Sandra Gulland is the author of six historical novels, including the JOSEPHINE B. TRILOGY, based on the life of Josephine Bonaparte, published in seventeen countries. Her latest novel, THE GAME OF HOPE, is a Young Adult novel about Josephine’s daughter.

An American-Canadian, Sandra was born in Miami, Florida, and lived in Rio de Janeiro, Berkeley and Chicago before immigrating to Ontario, Canada in 1970. She and her husband live half the year in Canada and half in Mexico. For more information about the author and her work, go to www.sandragulland.com.

Have you had a chance to read THE GAME OF HOPE yet? Does imagining what will be on your tombstone impact your writing goals? How do you react when you must kill your darlings? Share your thoughts about the interview in the comments!