Preston Norton, NEANDERTHAL OPENS THE DOOR TO THE UNIVERSE, on being "the best you can be" as a state of progression

We're thrilled to have Preston Norton stop in to chat more about his latest novel, NEANDERTHAL OPENS THE DOOR TO THE UNIVERSE.

Preston, how long or hard was your road to publication? How many books did you write before this one, and how many never got published?

Oh god, are you ready for this? TEN BOOKS. I wrote ten f***ing books before this one. Now, three of them were published technically (numbers 5, 7, and 8 respectively), but they were all from extremely small publishing houses, practically the equivalent of self-publishing. But believe it or not, I'm actually glad it turned out this way. I'm glad I didn't catch a break before I really pushed myself as an aspiring writer. I think all that rejection really formed me and forced me to become the very best I can be. (LIKE NARUTO!!) Of course, being "the best you can be" should be a state of progression and never really stop. I hope I can look back on NEANDERTHAL and think, "Man, that was trash." Okay, I'm kidding, but you know what I mean!

It's not so much emotional, but when it comes to humor and pop-culture, Jesse Andrews is the man. He is a cornucopia of pop-culture! (And way funnier about it than, say, Ernest Cline.) I'm sure you've already read or seen ME AND EARL AND THE DYING GIRL. (If you haven't, go and correct the error of your ways.) But have you read THE HATERS? You will laugh. Maybe you will cry. But if you do, it will be because of how hard you are laughing.

A very weird, ambitious project that I'm not sure I will finish! Which, some might claim, is a waste of time. For me, however, it's hardly. The only thing I consider a waste of time is not writing. (Also, watching The Walking Dead. Like, will that show ever end??) Anyway, this particular project demands to be written in third person, which I've grown rusty in, so hopefully I'll relearn how to not suck at that. Wish me luck. I feel like I'm attempting to play a sport left-handed. 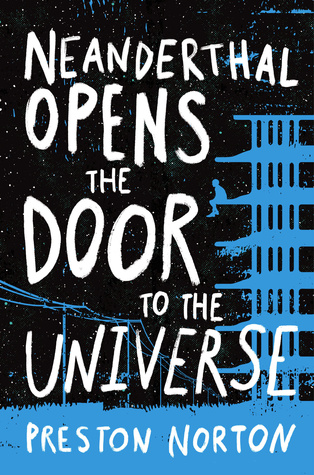 Cliff Hubbard is a huge loser. Literally. His nickname at Happy Valley High School is Neanderthal because he's so enormous-6'6" and 250 pounds to be exact. He has nobody at school, and life in his trailer-park home has gone from bad to worse ever since his older brother's suicide.

There's no one Cliff hates more than the nauseatingly cool quarterback, Aaron Zimmerman. Then Aaron returns to school after a near-death experience with a bizarre claim: while he was unconscious he saw God, who gave him a list of things to do to make Happy Valley High suck less. And God said there's only one person who can help: Neanderthal.

To his own surprise, Cliff says he's in. As he and Aaron make their way through the List, which involves a vindictive English teacher, a mysterious computer hacker, a decidedly unchristian cult of Jesus Teens, the local drug dealers, and the meanest bully at HVHS, Cliff feels like he's part of something for the first time since losing his brother. But fixing a broken school isn't as simple as it seems, and just when Cliff thinks they've completed the List, he realizes their mission hits closer to home than he ever imagined.

Preston Norton is: bisexual, slightly genderqueer, married. His partner, Erin, is trying to put him on a diet, and he’s revolting (both contexts apply). He has taught seventh grade and ninth grade English, mentored drug addicts, and mowed lawns (in no particular order). He is obsessed with 2001: A Space Odyssey and Quentin Tarantino. Visit him online at http://prestonnorton.wixsite.com/prestonnorton and on Twitter at @PrestonSNorton.

Have you had a chance to read NEANDERTHAL OPENS THE DOOR TO THE UNIVERSE yet? How hard do you strive to make each project better? What do you do to keep moving forward in the face of rejection? Share your thoughts about the interview in the comments!