Fonda Lee, author of CROSS FIRE, on outlines giving her the courage to get started

CROSS FIRE is the sequel to EXO, and we're excited to have Fonda Lee stop by to share more about it.

Fonda, what book or books would most resonate with readers who love your book--or visa versa?

I think readers who like action-packed but smart speculative fiction with strong worldbuilding will enjoy CROSS FIRE, so books like Scott Westerfeld’s Uglies and Leviathan series, S.J. Kincaid’s Insignia series, SHIP BREAKER by Paolo Bacigalupi, PROXY by Alex London, and THIS MORTAL COIL by Emily Suvada are some titles I’d recommend.

How long did you work on CROSS FIRE?

I worked on CROSS FIRE for about a year. Every February, I go to a four-day writing retreat on the Olympic Peninsula. In 2016, I spent my retreat time outlining and writing the first three chapters of CROSS FIRE, and at that same retreat the following year I was doing final revisions on the manuscript.

I learned that writing a sequel is hard! You would think that it would be easier than writing the first book—after all, you already know the world and the characters—but it has it’s own unique set of challenges that I think make it even more difficult. Even though I outline beforehand, I’ve discovered that it only serves to give me the courage to get started; it certainly doesn’t save me from throwing out and rewriting up to half of the book…more than once! 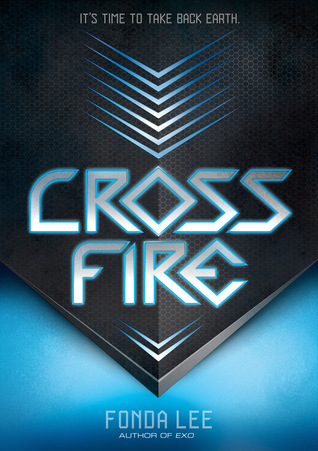 Fonda is a former corporate strategist who has worked for or advised a number of Fortune 500 companies. She holds black belts in karate and kung fu, goes mad for smart action movies (think The Matrix, Inception, and Minority Report) and is an Eggs Benedict enthusiast. Born and raised in Calgary, Canada, she currently resides in Portland, Oregon.

Have you had a chance to read CROSS FIRE yet? Do you attend writing retreats, and if so, are you productive? Have you attempted to write a sequel? Share your thoughts about the interview in the comments!