Andrew Shvarts, author of CITY OF BASTARDS, on tying himself into plot knots

CITY OF BASTARDS is the second book in the Royal Bastards series, and we're thrilled to have Andrew Shvarts here to tell us more about it.

Andrew, what was your inspiration for writing CITY OF BASTARDS?

My three-book deal! No, seriously, when I set out to write a sequel to Royal Bastards, I knew I wanted it to feel really different, to take the characters but put them in a wildly different kind of story. There were a few different elements I really wanted to tackle: a murder mystery, a political thriller, a story that’s all about the inner working of a single city, and a narrative that captures the experience of struggling to fit in in a very new world.

Without spoilers, there’s a few twists that happen towards the climax that are particularly devastating and awful, that proved harder to write than I’d thought! I’m very proud of the book’s ending, which I think hits a certain hopeful high even in the midst of darkness, but my secret favorite is a scene near the three-quarters mark, where an escape through some catacombs takes an unexpected turn into cosmic horror.

That mysteries are really really hard! I ended up having to do a massive rewrite about 50% of the way through, the biggest I’ve ever done, because I tied myself into plot knots I just couldn’t unravel. I’m the definition of a pantser, and it turns out that’s a very hard way to approach a cohesive complex mystery with a lot of scheming factions!

I think my road was fairly average in terms of length and difficulty? Which is to say, long and hard. I graduated college convinced I would be the next Stephen King, writing short stories that… never went anywhere. Then I got a game in videogame writing and put fiction aside for a few years to hone that craft. When I picked up again, I knew I wanted to do YA novels. My first one languished and went nowhere. My second got me an agent and some incredibly close calls, but didn’t sell. And my third was Royal Bastards!

I work at home, with a glass of whiskey, or occasionally in a hotel room when I really want to dive deep. I’m a very twitchy, fidgety person, so writing often involves pacing around the room, acting out dialogues, jumping around when an idea hits me. Let’s just say I can’t work in coffee shops!

To experiment and diversify, both in terms of what you read and what you write. Don’t limit yourself to one genre or story. The best thing that ever happened to me as a writer was my game-writing job, which forced me to forget all the tropes and shortcuts I’d come to rely on, and to discover the heart of what makes a good story. The best way to learn to write is to master unfamiliar terrain.

The third book in the series, the exciting conclusion! I can’t say too much, but let’s just say there’s a lot of game-changing twists, shocking reveals and a trip to one of the most remote and unexpected parts of the Kingdom.

Tilla, bastard of House Kent, has it made. Safe from her murderous father in the dazzling capital of Lightspire, she lives a life of luxury under the protection of the Volaris King, alongside her boyfriend, Zell, and best friend, Princess Lyriana.

So why isn't she happy? Maybe it's the whispers and stares that follow her wherever she goes, as the daughter of the traitor waging war against Lightspire. Or maybe it's the memories of her beloved brother, Jax, who lies cold in his grave even as she tries to settle into a life in the city's prestigious University.

Then Tilla stumbles upon the body of a classmate-a friend. The authorities are quick to rule it a suicide and sweep it under the rug, but when Tilla herself is attacked by a mysterious man with terrifying powers, she's convinced of a conspiracy. Her friends beg her to stay silent; what she's suggesting is impossible . . . and treasonous.

But Tilla can't-won't-let it go. And the deeper she digs, the more questions she uncovers. How is the West beating the supposedly invincible Lightspire mages in battle? Is it connected to the shadowy cult wreaking havoc in Lightspire? Nothing is as it seems in the glorious capital, and Tilla's presence might just be the spark that sets the Kingdom aflame. 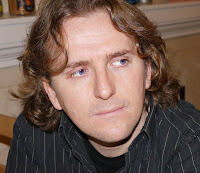 Andrew Shvarts is an author of novels and video games. He has a BA in English Literature and Russian from Vassar College. He works for Pixelberry Studios as a designer, making mobile games like High School Story, Choices, and more. Andrew lives in San Jose, California, with his wife, toddler, and two kittens. Visit him online at andrewshvarts.com and on Twitter @Shvartacus.

Have you had a chance to read CITY OF BASTARDS yet? Do you act out scenes and jump around when you write? Do you experiment and diversify with what you read and write? Share your thoughts about the interview in the comments!