Henry Turner, author of HIDING, on everything serving the forward motion

We're excited to have Henry Turner with us to chat about his latest novel, HIDING.

Henry, what is your favorite thing about HIDING?

I wrote the book and each part of it is close to me. Honestly I’d love to hear what part of HIDING is your favorite.

What was your inspiration for writing HIDING?

HIDING grew out of talks I gave at high schools where I discussed how teens are under so much pressure to achieve. I saw that kids were asked what they wanted to be, and not what they are right now. The teen years are often considered just a transitional phase to becoming an adult, even though it’s a time when we all have experiences that are remembered for a lifetime. I wanted to create a character who insists on seeing value in himself even when others don’t, and feels the importance of his experiences, not just his achievements.

In many ways the book is a single extended scene, portraying through the narrator’s memory events taking place in many locations and times, yet always relevant to his present thoughts and feelings as he progresses on his journey through Laura’s house.

Books with a strong first person voice. Reviewers have compared HIDING to THE CATCHER IN THE RYE and that’s pretty apt.


How long did you work on HIDING?

I wrote the first draft in few months, and then put in almost a year in revisions.

Technically, creating a story that merges thought and action, mixes timeframes, and shows thought as a progressive inner dialogue of the mind as it searches for answers, making thought suspenseful.

What do you hope readers will take away from HIDING?

That they have value regardless of their station in life.

To get there I wrote numerous books and stories, some published by small presses, some not at all. But everything serves the forward motion, even if it’s not published, and that’s what to keep in mind.

The moment for me was finally learning how to make what I wrote come alive. After that happened, I simply knew I’d be published.
What's your writing ritual like? Do you listen to music? Work at home or at a coffee shop or the library, etc?

I prefer writing at home, at my desk. But throughout my writing life I’ve written in cafes, libraries, parked cars, you name it.

To accept what you can do and keep doing it. It’s the only way to grow.

I just finished a new YA novel, and a middle grade novel. I’m currently focusing on a book for older readers, and working on the film adaptation of my previous YA novel, ASK THE DARK. 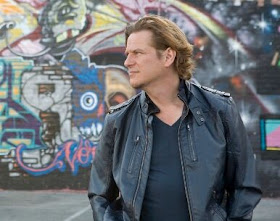 Henry Turner grew up in Baltimore, Maryland, in Roland Park, where he attended public school. He was always interested in storytelling in one form or another, and as a teenager he started making films with his brother and neighborhood kids.

Henry wound up making five feature films, writing and shooting and cutting them. When his films won awards and attracted industry attention he moved to Los Angeles, after getting a call from a film production company that was looking for scripts. He stayed in L.A. and helped build a fledgling film festival that has since become well-established. He also freelanced in entertainment journalism, interviewing well-known filmmakers such as George Lucas, Brian Grazer, Quentin Tarantino, James Cameron, and many others. All along he was writing stories.

During a year spent in Greece he made a total commitment to writing fiction. Returning to Los Angeles, he met his future wife, who encouraged him to study fiction writing with a novelist he admired – John Rechy. Henry stayed in Rechy’s private writing group for a number of years and also studied privately with Hubert Selby. Since then he and his wife have had a son, Hugo, who is now twelve. Henry Turner is now writing a new novel.

Have you had a chance to read HIDING yet? Have you written a story that mixes timeframes? Have you had a moment where you knew you'd be published? Share your thoughts about the interview in the comments!