We're thrilled to have Douglas Lain join us to chat about his latest novel, BASH BASH REVOLUTION.

Douglas, what was your inspiration for writing BASH BASH REVOLUTION?

My primary inspiration for writing BASH BASH REVOLUTION was my relationship with my now adult son Benjamin. When Benjamin was younger I could always beat him at fighting games because I'd mastered a fairly cheap approach to them, a button mashing approach. I developed my technique by playing Street Fighter II in the early 90s, back when I was still a young man and had the spare time and spare quarters to spend on arcade games.

It was a simple strategy, always play a fast character like Chun Li and keep her in the air. Try to land kicks to the opposing player's head.

My button mashing approach worked against most novice players and for awhile I could easily beat my young son Benjamin at most fighting games. That is, I could beat him until he started to take a game called Super Smash Brothers Melee seriously. Super Smash Brothers Melee is a complex game. To play it well requires that you learn a multitude of techniques and strategies.

I recall how devastated I was when I realized that my Chun Li button mashing approach was not cutting it. I found myself losing every round.

No matter how many times I tried, and after hours of playing, I couldn't win. In fact, I seemed to get worse and worse at the game. My losses were more and more humiliating as I insisted that we play one more time and then, one more time again.

I've been told that this novel is similar to Ernest Cline's Ready Player One. In fact, one reader left a review at Good Reads saying that this book is the antithesis of Ready Player One. Where Cline's book is optimistic about the wonders of virtual reality and artificial intelligence, my novel presents these things as terrible threats to humanity. But, the truth is, I haven't read Cline's book so I'm not sure about the comparison.

When I wrote the book I thought I was writing a version of JD Salinger's Catcher in the Rye only with augmented reality, Donald Trump, the threat of nuclear war, and 80s era video game references.

Yes. What happened was fairly typical for me.

At some point, I'd decided that I wanted to write a book wherein a group of gamers managed to save the world from the threat of a nuclear war. I thought, "If all life on Earth was about to be destroyed by this war and a ragtag group of video game nerds had to stop it, how would they do it?" I wanted them to replace what we think of as politics, to replace the system we live with now, with video games. But, I couldn't quite get my head around how they could do it.

Anyhow, it dawned on me after I'd already started writing that they'd use augmented reality video games to save the world, but I'd already been writing the story for awhile when I realized this and, of course, the novel had to be worked out totally differently once that piece fell into place.

When I realized that Pokemon Go was the key to stopping the nuclear war, that changed everything.

I've been meaning to return to a nonfiction book about the philosophy and politics of the original Star Trek series for several years now. I might return to that unless some new story idea starts to obsess me. 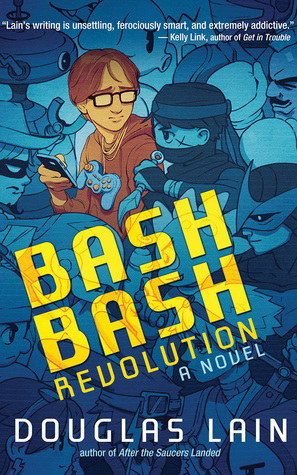 Seventeen-year-old Matthew Munson is ranked thirteenth in the state in Bash Bash Revolution, an outdated video game from 2002 that, in 2017, is still getting tournament play. He's a high school dropout who still lives at home with his mom, doing little but gaming and moping. That is, until Matthew's dad turns up again.

Jeffrey Munson is a computer geek who'd left home eight years earlier to work on a top secret military project. Jeff has been a sporadic presence in Matthew's life, and much to his son's displeasure insists on bonding over video games. The two start entering local tournaments together, where Jeff shows astonishing aptitude for Bash Bash Revolution in particular.

Then, as abruptly as he appeared, Matthew's father disappears again, just as he was beginning to let Jeff back into his life.

The betrayal is life-shattering, and Matthew decides to give chase, in the process discovering the true nature of the government-sponsored artificial intelligence program his father has been involved in. Told as a series of conversations between Matthew and his father's artificial intelligence program, Bash Bash Revolution is a wildly original novel of apocalypse and revolution, as well as a poignant story of broken family.

Douglas Lain is the author of Billy Moon and After the Saucers Landed, the editor of two speculative fiction anthologies, In the Shadow of the Towers and Deserts of Fire, and the publisher of Zero Books, which specializes in philosophy and political theory. He hosts the Zero Squared podcast, interviewing a wide range of fascinating and engaging people with insights for the new millennium. Lain lives in Portland, Oregon, with his wife and children.

Have you had a chance to read BASH BASH REVOLUTION yet? Have video games inspired you to write a story? Have you had a story realization that caused you to go back and rework everything? Share your thoughts about the interview in the comments!