Andy Marino, author of AUTONOMOUS, on wallpapering a mansion with unpublished pages

We're thrilled to have Andy Marino stop by to share more about his latest novel, AUTONOMOUS.

Andy, what is your favorite thing about AUTONOMOUS?

The interplay between the driverless car’s artificial intelligence and the human passengers. I wanted Otto—the car—to be a fleshed-out character in his own right, and the way his strange personality evolves changes the dynamic between the friends and frenemies on the road trip.

It was important to me to find a new way to tell the “artificial intelligence learns about being human” story, and I thought it would be interesting—and funny—if this sophisticated prototype was learning from a group of teenagers making impulsive decisions and just generally being reckless.

How long did you work on AUTONOMOUS?

About two years, on and off—a burst of a few months for the first draft, another burst for the first round of editing, etc. Since books often take this long from draft to publication, I was a little worried about writing about an emerging technology. I definitely had some nightmares about the book being outpaced by the tech—like, what if self-driving cars are old news by the time it comes out? But the development has been slower than I think a lot of people anticipated.

This is my fourth published novel, and I have just as many unpublished, plus enough fragments and false starts to wallpaper a mansion. For the first few years I was very anti-outline, and didn’t plan much in advance, so I followed a lot of rabbit holes to nowhere. Hence the pile of pages nobody will ever read!

When I have a full day to write, which is rare, I head to the library and shoot for 2000 words. Otherwise, I work quietly at home. I can’t really do the coffee shop thing, or listen to music, because I am not a great multitasker and my brain can only focus on one thing at a time. Music—even instrumental music—and other people’s conversations are a surefire way for me to end up with a word count of zero. I’m jealous of authors who can listen to music while they work—I think it would be really cool to have a playlist that represents the emotional beats of the story as it unfolds. I just can’t do it. 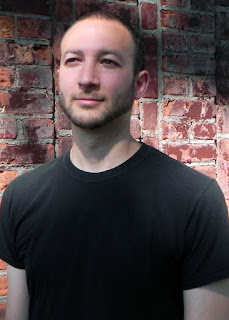 During his teen years, Andy designed sets for school plays and became an expert stockpiler of unfinished art projects. After graduating from NYU, he played guitar in the bands Sayonara and SleepCrime, and got serious about writing fiction.

The insidious tractor beam of online social networks became the inspiration for UNISON SPARK, a novel about two teens with a secret past fighting the manipulative, all-consuming social network of the future. A morbid childhood fascination with Civil War photographs planted the seeds for UNCRASHABLE DAKOTA, which concerns the discovery of flight, a long-simmering family feud, and the fate of the world’s most magnificent airship – not to mention a very odd species of beetle. Years of living in New York helped create THE DOOR’s afterlife city, a never-ending metropolis of uncanny architecture and strange inhabitants.

Have you had a chance to read AUTONOMOUS yet? Have you written about a technology you were worried would be outpaced by reality? Are you able to listen to music while you write? Share your thoughts about the interview in the comments!