WoW: Gloria Chao and Confessions of a Tiger Cub

Today, I am so excited to present a very special guest post by my agency sis, Gloria Chao. Her book AMERICAN PANDA (Simon Pulse) was released yesterday amid a lot of well-deserved excitement. Her book follows 17-year-old Mei, a Taiwanese-American teen whose parents want her to be a doctor and marry a Taiwanese Ivy Leaguer despite her squeamishness with germs and crush on a Japanese classmate. It’s one of my faves and if you don’t already have your own copy, use the links below to get one ASAP.

In her guest post below, she discusses how her writing journey was a process of self-discovery that improved her relationship with her family. Stay tuned after the post for a bit more about Gloria. But without further ado, here’s Gloria Chao!

Confessions of a Tiger Cub: How Writing Improved my Relationship with my Parents
By Gloria Chao

My whole life, I was pushed away from humanities. English major? Might as well throw my stuff out and live in a refrigerator box now, the way my parents felt. This was so ingrained in me from the start that despite my childhood love of The Baby-Sitters Club and writing my own stories, I never once considered anything other than math and science.

Growing up, I felt like my parents and I spoke different languages both literally and metaphorically. And as a result, there were two versions of me. At school, I spoke English and tried desperately to fit in. At home, I spoke Mandarin, bottled up every emotion, and obeyed my parents even when I disagreed (which was most of the time). My obedience stemmed from a fear of yelling and Pavlovian duty.

To give you an example of how traditional my parents were, I wasn’t allowed to date in high school. My parents were so strict that the first time I liked a boy and he asked me out, I didn’t answer because it felt like my only choice. He had an earring, dyed his hair green, wasn’t in honors classes, and once suggested I tell my algebra teacher I had explosive diarrhea so I could cut class with him. My parents would have gotten explosive diarrhea just at the thought of me breathing the same air as such a rebel. But then, as soon as college started, I suddenly had a tiny window of time to nab my husband. If I waited too long, my stock would drop, leaving me a sad spinster whose expiring eggs would be wasted on pads and tampons.

I was forever trying to claw myself out of the giant cultural gap that separated us, and that gap only grew as I started dental school and realized it was a terrible fit for me. I didn’t enjoy the subject matter, I was germ conscious, and spending my day in someone else’s mouth was not my idea of a fun time. During my five-year foray into dentistry, novels became my only escape. And with my now husband's encouragement, I started to believe that I, Gloria Chao, who had been groomed to be a doctor, dentist, or engineer from Day One, could use the right side of my brain. It felt forbidden—perhaps because it was, by my parents. I understood in the sense that I knew they wanted the best for me, which to them meant a stable, lucrative career. But dentistry had taken so much from me. The bits of myself I had painstakingly found through the years had been drilled and suctioned away, leaving me a hollow shell.

I tried to tell my parents how unhappy I was. Their response: I thought you were a fighter—what happened? Why could your classmates do it when you couldn’t? They felt I had failed as a dentist, as a person.

To cope, I began writing about a Taiwanese-American MIT student whose parents want her to become a doctor even though she’s afraid of germs. Just like me, she was stuck between two cultures, quite lost, and had to choose between her parents and the life she wanted.

While writing, plenty of questions arose about my culture and my parents’ and grandparents’ experiences. I never knew the whys and suddenly, for the sake of the book, I put it all out there, asking my mom questions I never dared to before. Why had they held on to their traditions so tightly? Why were their expectations so rigid and unyielding? Why didn’t we ever talk about anything?

And the one question she asked me: Why did I choose to put aside a lucrative career that would allow me to hold my own in my marriage and with my in-laws?

It was more than a language barrier—it was a generational, cultural barrier. Until we talked, she couldn’t understand that I had different priorities, different concerns, a different relationship. It took thirty years, but because of those conversations, we learned how to communicate. Became friends.

She began telling her friends about my new career, which in Chinese culture meant she couldn’t be prouder. Then, she told me she was glad I had found my passion, and that I hadn’t let dentistry erase me. She said as a mother, she expected to teach me about life and love, but she’s learned from me: how to show affection; that like everything else in the world, there’s good and bad to every culture; and happiness can mean something different for each individual. Although she made different choices, she now understands how those paths would have been wrong for me. The cultural gap is still there, but not only has a bridge formed, the gap itself has shrunk. I’ve helped her see that just like me, she’s Chinese and American. And we don’t have to see ourselves as one or the other. All of this worked its way into the book, American Panda, which evolved into a story that was, at its core, about the main character and her mother’s relationship.

Recently, a family friend was upset with their son for quitting a well-paying job to pursue graduate school instead of “sticking with his stable career and focusing on starting a family.” Surprisingly, my parents assured the friend that children can have a different, possibly better vision for their life. My mother now says that she wants to help her immigrant friends deal with the cultural gap, “just like my writing.” There are no words, in Mandarin or English, to fully express what this means to me. 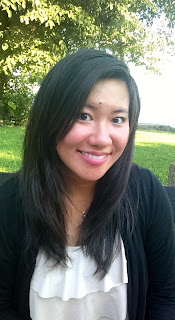 ABOUT GLORIA CHAO
Gloria Chao is an MIT grad turned dentist turned writer. She currently lives in Chicago with her ever-supportive husband, for whom she became a nine-hole golfer (sometimes seven). She is always up for cooperative board games, Dance Dance Revolution, or soup dumplings. She was also once a black belt in kung-fu and a competitive dancer, but that side of her was drilled and suctioned out. American Panda is her debut novel, and Misaligned is forthcoming fall 2019.

Visit her tea-and-book-filled world at gloriachao.wordpress.com and find her on Twitter @gloriacchao.
Kelly deVos at 8:00 AM