Hello, lovelies! I haven't posted in a while, but I couldn't resist shouting this out from the rooftops! AYAP is SO proud and honored to be able to host the cover and excerpt reveal (and an ENORMOUS giveaway) for our very own Erin Cashman's next novel, which is coming out in September. Uncharted is literally all the things I love rolled into one books: a mystical Celtic island, not one but two warring secret societies, danger, action, romance, and a character grappling with guilt and mental illness. I love Annabeth. And I love Erin, who is our First Five Pages Workshop coordinator and quite literally one of the most generous, intelligent, and caring people on the planet. That, of course, comes through in her writing.

So. Without further fanfare, here's the gorgeous cover! And you can get a sneak peek into the book by downloading the PDF excerpt here. Read on for the interview and giveaway! 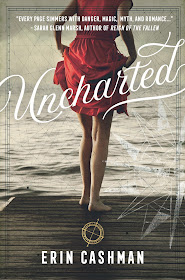 I love this cover so much. That splash of red Annabeth is wearing reminds me of the way she learns to take charge in this book, despite the grey sea of guilt and depression that swirls inside her. The cover shows how she makes herself powerful by sheer force of determination, and I love that the symbol of the Magellans is right there, too. 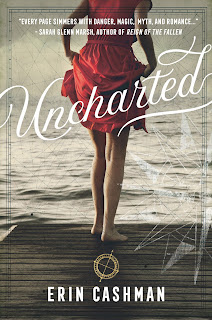 “Prepare to be swept away! An ancient secret that many have died to protect. Richly detailed mythology. A hero who is – literally – like no other. This thrilling and romantic adventure deftly navigates the blurred lines between legend and reality. Safe to say, Erin Cashman’s UNCHARTED plotted a course straight to my heart!” ~ Pintip Dunn, New York Times bestselling author of YA fiction; The Forget Tomorrow series, The Darkest Lie, Girl on the Verge

“Journey through the fog into the atmospheric world of UNCHARTED, a stunning new fantasy where legend and reality come together in the form of a deadly mystery, where every page simmers with danger, magic, myth, and romance. Readers are sure to fall in love with this dark, gripping story that brings ancient Ireland to life on the misty shores of modern-day Maine.” ~ Sarah Glenn Marsh, author of the Reign of the Fallen series and Fear the Drowning Deep

“A fantastic read! A perfect blend of thriller, mystery, romance, and contemporary, UNCHARTED features great characters, a marvelous setting, and a mythology so fabulous and complete that I couldn’t turn the pages fast enough. Readers who love Celtic legends, maps, and secret societies (and who doesn’t?) will want to put this on their TBR shelf ASAP. I can’t recommend it highly enough!” ~ Martina Boone, award-winning author of the Heirs of Watson Island series and the Celtic Legends collection

“Erin Cashman is a master storyteller. She finds portals in the seemingly ordinary world and leads us into unexplored territories of mystery, magic, and Irish mythology. Uncharted is a page-turner and a refreshingly original tale!” ~ Diana Renn, author of Tokyo Heist, Latitude Zero, Blue Voyage, and False Idols

Uncharted is available September 4 - but you can preorder it now!


Q. What was the inspiration for Uncharted?

A. My mother was born in Galway, Ireland, and moved to Massachusetts when she was twenty. Her formal education only went through the sixth grade, but she loved to spend her time on Galway Bay, where she was fed a steady diet of myth and legend. Even as an adult, she believed in all of it – kelpies, fairies, changelings, angels, Sea Maidens, etc. (When my kids watched The Little Mermaid, she told them to be careful around Sea Maidens. If they got too close to one, she claimed, the Sea Maiden would rip off their face and drown them!) My mother’s love of myth and legend has inspired so much of my writing, especially Uncharted. She once told me that she saw an island suddenly appear through the fog off the coast of Galway, and then it disappeared. That island, she believed, was the legendary island of Hy-Brasil.

Q. Isn’t the hidden island of Hy-Brasil more than a legend?

A. My mom captivated my imagination when she talked about the island, which I assumed was an Irish myth. After she died, though, I came across a reference to the island while researching a different story, and I was surprised to find that Hy-Brasil appeared on maps as a real place from 1325 through the mid-1800s, and people claimed to have visited it. The legends surrounding the island were fascinating as well – it was shrouded in fog, it only appeared once every seven years, the roads were paved with gold, the Fountain of Youth was located on the island, it was home to an advanced civilization, and it was an earthly paradise. The Boston Public Library had an exhibit on Hy-Brasil in 2016, and I was fascinated to see the old maps! (There are some map images on my Uncharted Pinterest board if you want to check them out! https://www.pinterest.com/erintcashman/uncharted/)

Q. I love books about secret societies and historical mysteries, so I’m really excited about the Serpent Society. What inspired you to come up with the idea of such a far-reaching conspiracy?

A. I love books about secret societies and historical mysteries, so I’m really excited about the Serpent Society. What inspired you to come up with the idea of such a far-reaching conspiracy?
It all started with those two words most important to any writer: What if? What if the island of Hy-Brasil was real? What if it was an earthly paradise, and the location of the Fountain of Youth? What if the location was discovered, would the island be corrupted by those wanting to study it, and those wanting to exploit it? What if there were some who would stop at nothing to find such a place? Given human nature, I thought that was likely, so in Uncharted, the Serpent Society is obsessed with finding the island, hoping for immortality and riches.

Q. The way you weave together Annabeth’s mental breakdown and her grief is very much part of her reactions and motivations through the story. What made you want to write about her journey?

A. In Uncharted, I wanted to explore guilt and grief in a way that was part of the story, but not the primary focus, and explore the different ways people are strong and courageous. My mother was one of the strongest people I’ve ever known, and she suffered from depression and was hospitalized at McLean hospital. Like Annabeth, she was treated with electroconvulsive therapy, and she was so grateful for the care she received at McLean. Also, like Annabeth, my mother rarely talked about her struggles, due to the stigma associated with mental illness. She refused to let her illness define her, but it was part of who she was, and she had to learn to accept herself for who she was. Annabeth has a similar journey in Uncharted. She has to come to terms with her guilt over the role she played in her mother’s death, and to accept herself and her past. But her past has shaped who she is, and it is that guilt that makes her determined to save her father, and other people she loves. Near the end of the book, there is a section that describes her journey:

Q. Were there any parts of the book that were hard to write?

A. There are two torture scenes that were both very hard for me to write! My wonderful editor, Ashley Hearn, really pushed me to dig deep in the climax, which was originally much quieter. I hated to put Annabeth and Griffin through it!

Q. I love the rivals to friends to romance relationship between Annabeth and Griffin and how they connect through their grief. What made you decide to make Griffin as broken as Annabeth?

A. My original concept of the book focused on the mystery and suspense with a small romantic subplot. But in the writing, the connection between Annabeth and Griffin became stronger and deeper than I had anticipated. At one point Annabeth thinks about how beautiful and broken Griffin is – and that describes him perfectly. Since he is harboring so many secrets from Annabeth, he was a hard character to write – at times he could be a real jerk!

UNCHARTED will be published in fall, 2018, and THE EXCEPTIONALS, a Bankstreet Best Children's Book of the Year, is available now.


We're excited to host a giveaway for Erin and Page Street Books! The giveaway is only open to those with U.S. mailing addresses, and it ends on March 27th at midnight (Eastern). Good luck! 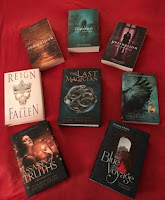 A signed ARC of Uncharted, and signed copies of books from the wonderful authors who have read and loved Uncharted, including:

Two additional winners will each receive a signed ARC of Uncharted!

To enter, please complete the Rafflecopter below!