At YALLFest I was fortunate to get an interview with not just one of the keynote speakers but two of them!

Kirsten wrote the Kiki Strike series, the Eternal Ones series, and the Nightmares! trilogy with Jason Segel. Interviewing impressive authors is always nerve-wracking, so I was having my very own nightmares about embarrassing myself.

Luckily, Kirsten was a super fun interview, and among other things, we chatted about our shared fascination with cryptids and our shared hatred of outlines.

Kirsten, what did your journey to publication look like?

You know, this is not a story that's going to help people because I basically got incredibly lucky. Almost everybody I know has worked very, very hard to get published, you know lots and lots of rejection, and I'm not saying I didn't deserve all of that rejection. I just happened to be working with a guy who had a boyfriend who worked in publishing, and he asked what I was working on, and I said, "Here, I'm working on this book," and I handed it to him, and he passed it to his boyfriend, and then like suddenly I had a deal, and that was how it happened. But that never happens. And I'm not generally a very lucky person, but maybe that was my one thing.

I read on your website about your belief in Big Foot and how that belief may have been one of the first steps you took toward becoming the author of weird YA fiction. Can you expand on that?

I one hundred percent believe. One hundred percent. I have a whole theory, like I've written essays about it. When I was growing up in the mountains of North Carolina, there was a part of the county they called Little Canada because it was so far out in the mountains that you might as well go to Canada. I knew people who lived up there - it would take you 45 minutes straight uphill to get to this place - and they would talk about this creature that would run across the road in front of people at night. It was called the Gray Man, and it was sort of a Bigfoot-like creature. These were not people who made stuff up or even liked to talk about this sort of stuff, and they would swear that it was true. So yeah, everything that I've written about you can trace back to something that happened in childhood or some weird book that I picked up. It's a direct line. So, yes, the Gray Man changed how I see the world.

You write both middle grade and YA – what’s your favorite thing about each category?

I love middle grade because I think the ages of 10, 11, and 12 are the most magical time in a person's life. I think that's the time when all of those links I talked about, I think that's when they originate. You know, it's the stuff that you come across between 10 and 12 that fascinates you, that ends up being part of your life forever, and so as an author having an opportunity to kind of, I don't know, build that is amazing. So I love middle grade. Love middle grade.

Teen books are great because I am an adult, I think, and I can be more adult with teens. There can be cursing and sex, although I'm much more into adventure and thrillers and stuff. But, yeah, you can talk about more adult topics and more adult themes, and I'm not talking about dirty stuff, I'm talking about just big ideas. The people at 15, 16, 17 are ready to start thinking about them.

How do you make the shift between writing the two?

Speaking of Jason, how did you guys team up?

We are both represented by William Morris Endeavor. It was funny because his agent worked on my first book series, so she worked with my agent way back in the day when my Kiki Strike series came out, so she was the one who was like, "You want to do middle grade?" So we met, and you know I'd never really thought much about collaborating, like I'm kind of a lone wolf in that respect, but I just liked him so much. We have similar interests and a similar sense of humor, and it's worked so nicely.

I feel like a lone wolf about my writing, too, so I’m curious about the process you two use for co-writing.

The first thing that we do is we spend - and speaking of advice that I give to people, and this is the thing that everybody hates and I hate it too, I hate it so much, but outlining - so for all the books we spend weeks back and forth on the phone, concepting and coming up with that grand outline. And once you have that, a book really writes itself. And that's why, even though I cannot tell you how much I hate writing outlines, I mean I absolutely hate it, but once you have that it's like somebody holding your hand as you write the book. You know exactly where you're going, you know exactly what you're doing, and it just makes the process a million times easier. So we spend a lot of time doing that.

And then I'll usually sketch the first very, very almost like skeletal draft, and then we will work together to put flesh on it. And the nice thing about the collaboration is that he's really, really good at things I wouldn't say I'm bad at, but he's much better than me at let's say dialog and detail, like he adds really, really wonderful details. And also he's a lot better than me at the mushy stuff. Like, seriously, if you come across a scene where it's like "Ahhh" odds are he was the one who wrote that. *laughs* "Like we need some lovey-dovey stuff, Jason, can you write it?"

Has there been an AHA! moment during your publishing adventure where you felt you had the key to writing a novel?
No, no, I wish I had something I could tell you. This is I think the best advice. When I first started writing, I thought it was supposed to be easy, like I thought people who did it professionally and people who were really good at it that they basically sat down and took dictation from God. And I found out that God has better things to do, he's not really interested in helping you write a middle grade novel. So it's a matter of work, and it's always going to be work, and once you accept that and you realize that sometimes it's just going to be torture, it's a lot easier to get through because you don't wonder if there's something wrong with you or if you're talentless or whatever it is. You sit down and do a job; it's like being a lawyer or a doctor. You do the job.

As a writer, what do you think is your weakest skill? And what have you done to get better at it?

I have many weaknesses as a writer. *laughs* I think impatience. And I think that's the bane of many many a writer is you're so eager to get your ideas down on paper that you skip all of those necessary steps, like outlining or knowing where you going next. That's been the hardest struggle for me. When I was writing my first book, I thought I was a genius and I had it all in my head, and I was like this is gonna be easy. And then suddenly, if you're writing a book of any length, and you get to around page 200 and you're like, "Oh my God, how did I get here? And where am I gonna go next?" It's the hard work.

We are in the process of finishing up the second Otherworld book, which is called Other Earth, and it's really, really creepy. I think both of us were really inspired by a lot of the new technologies that are being introduced that sound really great on the surface and then you start wondering what's going to come of them in a few years. And so there's a lot of that woven into the book. If Otherworld was more about virtual reality, Other Earth is starting to introduce augmented reality. You know because everybody thinks it's all Pokémon GO. And isn't this fun? And it's like, you know what? Maybe we should be thinking this through as well. So that was a lot of fun. And then I'm probably going to step out of the sci-fi world for a little while and do something dark and disturbing.

Dark and disturbing? I can't wait! Thanks for chatting with me, Kirsten!

The company says Otherworld is amazing—like nothing you’ve ever seen before. They say it’s addictive—that you’ll want to stay forever. They promise Otherworld will make all your dreams come true.

Simon thought Otherworld was a game. Turns out he knew nothing. Otherworld is the next phase of reality. It’s everything you’ve ever wanted.

And it’s about to change humanity forever.
Welcome to the Otherworld. No one could have seen it coming. 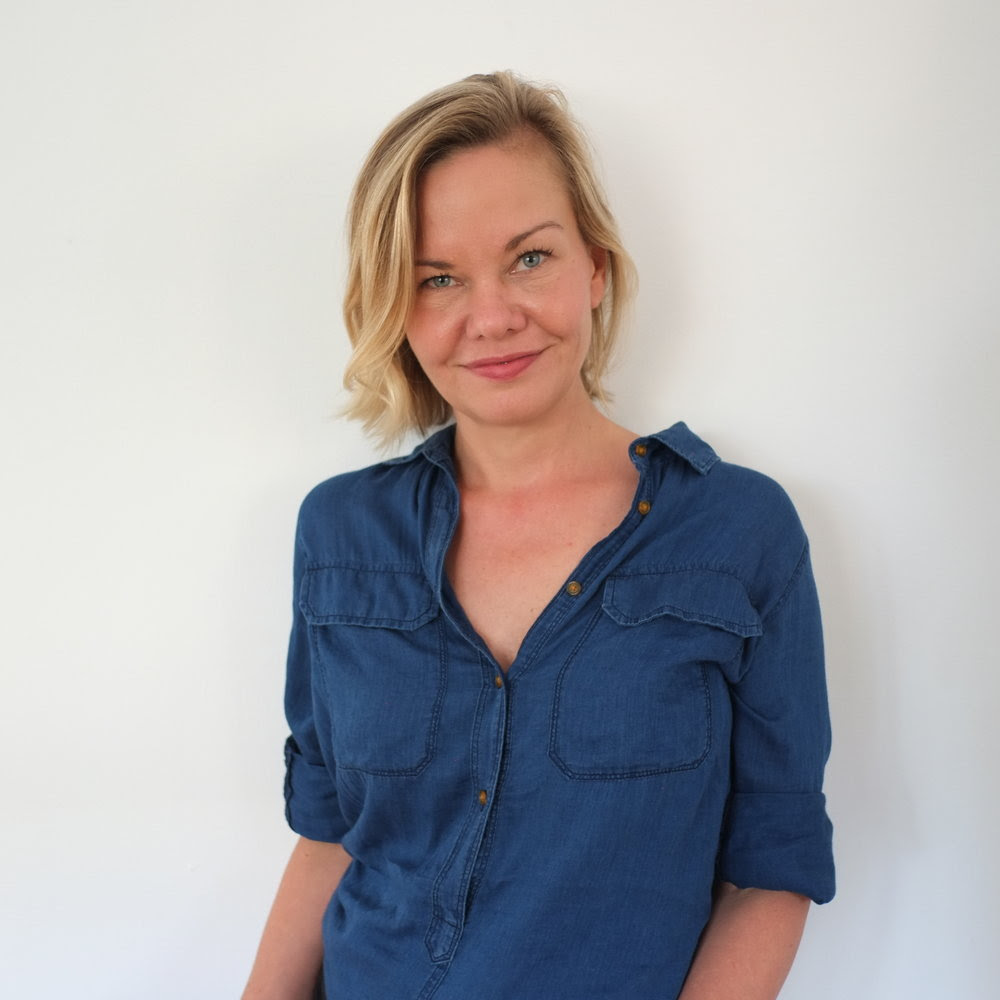 Kirsten Miller grew up in a small town in the mountains of North Carolina. At seventeen, she hit the road and moved to New York City, where she lives to this day. Kirsten is the author of the acclaimed Kiki Strike books, which tell the tale of the delinquent girl geniuses who keep Manhattan safe. Her novel The Eternal Ones is a twisted story of reincarnation, true love, and sinister secret societies.
Jocelyn Rish at 2:01 PM