Shivaun Plozza, author of FRANKIE, on being prepared to scrap anything and everything

We're delighted to have Shivaun Plozza join us to talk about her debut novel, FRANKIE.

Shivaun, what scene was really hard for you to write and why, and is that the one of which you are most proud? Or is there another scene you particularly love?

So this is a bit of a strange answer but … I am a bit of a prude when it comes to writing romance. I’m not at all prudish when it comes to real life or even when I’m reading but when it comes to writing I have to work hard not to die of embarrassment. I sort of shut my eyes and grimace and squeal and try to get it done as quickly as possible. I don’t know why that is but it made writing the romantic storyline of Frankie a bit tricky. I worked hard on it and I love the banter between Frankie and Nate – those are some of my favourite scenes – but the kissing scene was a nightmare for me! I’m getting better though – I’m actually really proud of the romance in my next book Tin Heart, which comes out in Australia early next year. Hopefully it keeps getting easier for me and I don’t have to shut my eyes while I type the kissing stuff in the future!

I got lost when I went to university to study creative writing. The problem was that I was at a prestigious university that had a very narrow definition of ‘good’ writing and that did not include writing for teens. My teachers did not respond kindly to my work because I was submitting YA. But instead of staying true to myself I changed my writing style so that I could get good grades but I lost who I was along the way. It took me a long time after university to realise why I wasn’t enjoying writing anymore. My AHA! moment was when I was working as a teacher and was in the library one day with a class of Year Eights quietly reading. I picked up a book to read too – it was On the Jellicoe Road by Melina Marchetta, one of the best examples of contemporary YA you will ever come across. I completely fell for the story and it reminded me why I wanted to be a writer and how I wanted to write. I suddenly felt free to write the way I wanted without worrying about whether or not it was ‘literary’ enough – because I could see that ‘YA’ and ‘literary’ were not mutually exclusive terms at all. Good writing is good writing, no matter who the audience is. The only reason people look down their noses at YA is because they don’t value and respect teens – which is monumentally silly attitude to have.

I have office space at home and that’s mostly where I write though I do also like to go on writing retreats for a few weeks at a time, as I find I get more done when I’m away from the home environment (and all the distractions therein).

Before I start writing a book I tend to think about the idea for a good year or so. Once I feel like the idea is settled, I start jotting down notes about the structure – I like to have my key plot points figured out before I start writing (though I often end up changing them as I write). I also create a playlist for each book so I can listen to it while I write and I sometimes create ‘mood boards’. I do a lot of preparation before I start writing in terms of the working out the intricacies of the plot and the characters but I am always prepared to scrap anything and everything as I’m writing the first draft because you only get a true feel for the story once you start writing. Going into the project with so much planning under my belt is more about providing a safety net for me – I never feel like it’s something I have to stick to.

How long did you work on FRANKIE?

It took me around four years to complete Frankie. She actually started out as a character in a different story. And she wasn’t half as awesomely bold, sassy and kickarse as she is now. But I worked hard to make her the kind of character I wanted her to be and eventually she outgrew the original story. So I started again and wrote the story that she deserved.

I decided I wanted to be a writer after reading The Hitchhiker’s Guide to the Galaxy by Douglas Adams when I was fourteen. I’d always been an avid reader but this was the first time I’d completely fangirled over a book. I knew that I wanted to be someone who could create stories and characters that people would fall in love with the way I’d fallen for that book. I studied creative writing at uni but my writing wasn’t initially well-received – in fact, I got some seriously negative feedback that made me doubt my abilities as a writer. I lost my way, trying to emulate the style of writing the university wanted rather than being true to who I was. It took me ages to come back from that – I wrote about three or four books in this time that weren’t very good. But that’s okay because to learn how to write you need to actually do it. This means that you pretty much have to write a couple of bad books first so you can learn how to do it right. I also think you never stop learning. 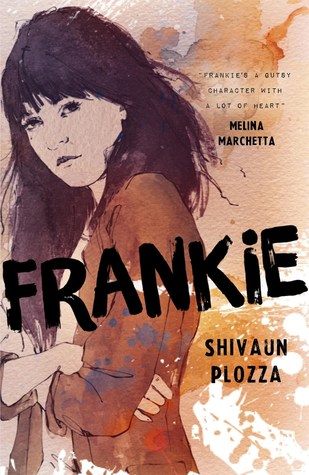 A genre-hopping, darkly funny novel about searching for the truth, finding yourself, and falling in love.

Frankie Vega is angry. Just ask the guy whose nose she broke. Or the cop investigating the burglary she witnessed, or her cheating ex-boyfriend, or her aunt who's tired of giving second chances.

When a kid shows up claiming to be Frankie's half brother, it opens the door to a past she doesn't want to remember. And when that kid goes missing, the only person willing to help is a boy with stupidly blue eyes, a criminal record, and secrets of his own.

Frankie's search for the truth could change her life, or cost her everything. Shivaun Plozza is the author of Frankie (Penguin, 2016), a darkly funny novel about searching for the truth, finding yourself and falling in love. She has published short fiction, flash fiction, poetry and essays.  When she's not writing, she's beavering away as an editor and a manuscript assessor.

Have you had a chance to read FRANKIE yet?

Shivaun likes to think about the story for a year or so before diving in. How do you like to prepare for a new project?

She also likes to have key plot points down before starting even if she's prepared to scrap them. Do you plot your stories or pants them?