Dave Connis, author of THE TEMPTATION OF ADAM, on learning how to deal with creative insecurities

We are thrilled to have Dave Connis stop by and talk about his debut novel, THE TEMPTATION OF ADAM.

Dave, what was your inspiration for writing THE TEMPTATION OF ADAM?

1. PERKS OF BEING A WALLFLOWER by Stephen Chbosky. TOA wouldn't exist without me realizing that the sort of book it was could exist. There's a scene in the movie that's never left me and never will. This moment, out of all the words found in the movie and book, made me want to write TOA.

"Charlie: There is so much pain. And I-I-I don't know how to not notice it.

There's a spot toward the end of the book where writing everything that came after it hurt. After I wrote the scene where everything changes, and I hadn't yet written the story arc, I was actually sad for two or three days until I finished the arc. Then, every time I got to that specific part in the editing process, I felt sad. Even now, when I go over it in physical form, I feel this tinge of down-ness. Heck, just thinking about it makes me sad. LET'S MOVE ON.

I wouldn't say the scene that shall not be named is the scene I'm most proud of, and I wouldn't say a particular scene has all of my affections, but I would say there are a few particular ways the plot comes together that I'm super proud of. That and the character of Addy. Addy didn't exist in the initial drafts of the book and now she's so fundamental to the story that I'm not really sure how that worked.

- Perks of Being a Wallflower by Stephen Chbosky, obvi.
- An Idiots Guide to Suffering. Jk. Not a book, but I'd probably read it if it was.
- More Happy than Not by Adam Silvera
- Reality Boy by A.S King.

How long did you work on THE TEMPTATION OF ADAM?

I started it December of 2013 and finished the first draft in February of 2014. After that, I edited it a few times and started querying it in April 2014. Then a bunch of things that didn't happen, happened (agent full requests, etc.) and I came back to it November 2014 after I got an R&R (revise and resubmit) from my current editor. I resubmitted it in February of 2015, got an offer on it in May 2015, signed the contract in August 2015 and it's now being published in November 2017.

That I tend to write about things that I want to believe, not necessarily the things I do believe.

What do you hope readers will take away from THE TEMPTATION OF ADAM?

That who they are, including their flaws and shortcomings, are enough.

I started writing seriously in 2011, here we are in 2017 and I'm still, at the time of writing these answers, two months away from the release first novel. I know some really talented people have been writing longer than I have and still have yet to see a contract, so I don't want to say my road was SO LONG even though it feels like it was. It's all relative, but I will say this, my road was really really really hard emotionally. Ask me about it sometime.

Nope. Not at all. I think I felt confidence for the first time when I was writing TOA, but I don't think I ever felt like I'd found the formula. I still don't think I have. I'm not sure if there is one. If someone has found the key, send me an email.

I work more than full-time and have a two year old running around during the day, so I have to do all my writing in the morning. My alarm goes off at 5:25, I talk myself into getting out of bed until about 5:29 when I finally decide I can't put off what I'm doing any longer. My son is a light sleeper in the morning hours, and everything I do, walking, making coffee, breathing, at that hour sounds like a semi-truck horn, so I've devised a morning ritual based around being as quiet as possible. I have to make coffee and have devised a system to do so which includes opening the fridge by slowly shimmying fingers into the seal instead of just opening the door like a normal person. Once I get my ninja coffee, I go to a blanket/pillow nest I have set up in my master bathroom closet because I can't write in my actual office. If I do my son hears me typing on my keyboard and wakes up, thus ending my only time to write. Glamorous, I know.

Set yourself free early on by realizing there's always a reason to not be happy with where you are. I realize that's easy for me to say because I have a book coming out, but, with every stage, there's some new person you can compare yourself to. There's a new doubt you can't shake. There's some new thing that you didn't achieve that you hold against yourself. Learn how to deal with those sorts of creative insecurities upfront so you've got good tools to help you grow writing into a career. The biggest thing I've found that combats all of this is simply just being thankful for the now. Like, speaking out loud to yourself about how good the things you have are.

I'm currently working on my second book (or 11th, if you want to be technical) called SUGGESTED READING, which comes out through Katherine Tegen in 2019.

SUGGESTED READING is about a girl, Clara, whose school, Lupton Academy, releases a contentious banned book list. Clara's love of literature makes her decide to capitalize on what she calls "Buck Authority Syndrome", aka doing things you're not supposed to simply because you've been told not to do them, by starting a banned book library in her locker. Her choice, along with the power of the books she's peddling, makes her question censorship, the labels she's put on others, and what having empathy really means as her community takes sides about what's right and what's wrong. 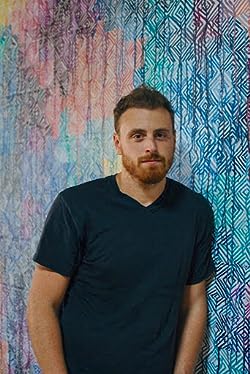 I write books you can sing and words you can read. I live in Chattanooga, TN with my wife, Clara and a dog that barks at nonexistent threats. When I'm not writing YA or MG, I'm probably working really strange part-time jobs, and doing other things that actually give my family the ability to eat food. I'm a member the Jedi Counsel, and I have a propensity to daydream when ever I attempt to be an adult.

Have you had a chance to read THE TEMPTATION OF ADAM?
Do you have to sneak around to fit in early morning writing?
Are you able to just be thankful for the now?