Julia Keller, author of THE DARK INTERCEPT, on your ideas being your best friend

Happy Halloween! On this spooky day, we're thrilled to have Julia Keller with us to share more about her novel, THE DARK INTERCEPT.

Julia, what did this book teach you about writing or about yourself?

What a great question! I love the idea that books are for the people who write them as much as they're for the people who read them. It's really, really true. When you write a book, you make a new best friend: Your ideas. THE DARK INTERCEPT let me take some of my favorite ideas out for a spin.

I've been lucky in my writing life. I won a Pulitzer Prize for my work at the Chicago Tribune, and that made people interested in my stories. The hard part was having them understand that, while I was journalist and wrote about real things, I wanted to write fiction. Once I'd written THE DARK INTERCEPT, I was fortunate to be paired up with a great editor -- Ali Fisher at Tor. She helped me re-think the shape of my story. And like all writers, or at least the ones I know, I have several unpublished manuscripts hanging out in my desk drawer. Someday, they may see the light of day . . .

Book Three in the THE DARK INTERCEPT trilogy, which I call MUSIC FROM A BROKEN STAR. I just finished Book Two, A SCREAMING IN THE MIND, which will be published in 2018. I hope readers are so engaged with the characters in Book One that they just can't wait to read the rest of the story! 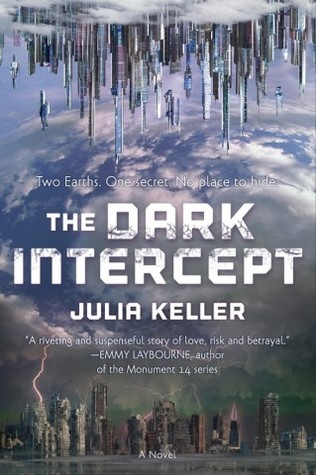 The State controls your emotions. What would you pay to feel free?

In a radiant world of endless summer, the Intercept keeps the peace. Violet Crowley, the sixteen-year-old daughter of New Earth’s Founding Father, has spent her life in comfort and safety. Her days are easy thanks to the Intercept, a crime-prevention device that monitors and provokes emotion.

But when her long-time crush, Danny Mayhew, gets into a dangerous altercation on Old Earth, Violet launches a secret investigation to find out what he's hiding. An investigation that will lead her to question everything she's ever known about Danny, her father, and the power of the Intercept.

Julia was born and raised in Huntington, West Virginia. She graduated from Marshall University, then later earned a doctoral degree in English Literature at Ohio State University.

She was a Nieman Fellow at Harvard University and has taught at Princeton and Ohio State Universities, and the University of Notre Dame. She is a guest essayist on The NewsHour with Jim Lehrer on PBS and has been a contributor on CNN and NBC Nightly News. In 2005, she won the Pulitzer Prize for Feature Writing.

Julia lives in a high-rise in Chicago and a stone cottage on a lake in rural Ohio.

Have you had a chance to read THE DARK INTERCEPT yet? Do you think books are both for the people who read them and for those who write them? Do you have unpublished manuscripts hanging out in a desk drawer? Share your thoughts about the interview in the comments!