Carrie Jones, author of ENHANCED, on realizing that she really wants to be a hero

ENHANCED is the second book in the Flying series, and we're excited to have Carrie Jones join us to share more about it.

Carrie, hat was your inspiration for writing ENHANCED?

I wanted to write a story about teenagers put in impossible situations, where the only way that they can deal is relying on each other and their own heroic traits. But I also think that teenagers are brilliant and engaged and capable of handling big themes even when those themes are presented in quirky ways. So, the whole FLYING series is about meshing those concepts – presenting themes of “othering,” friendship, and distrust in the government within a story that flows quickly and is full of adventure.

In a weird way, ENHANCED was influenced by the friendship of Captain America and Bucky/the Winter Soldier. My friend and I were watching a ton of Marvel movies and we were like, “Um… why are there never any awesome woman superhero friendships like that?” So, in a weird way ENHANCED is a homage to that and to female friendship.

And finally, the third inspiration was an event I witnessed as a volunteer firefighter when a restaurant burnt down in our small town. There’s about 5,000 people in our town. It’s super small. When I was looking at the flames, I thought I saw something hovering above the restaurant, something unidentified. Obviously, I was probably pretty hot and dehydrated at the time so I was probably hallucinating. But if you read ENHANCED, you’ll totally recognize this in one of the scenes.

I realized that I really want to be a hero and I’m so super frustrated that I’m not. I would, honestly, be the worst hero ever. I have no super skills. I trip over things a lot. I break my toe once a year. But when I was writing this novel, I had this mini-epiphany that so many of my characters want to save other people and this is so obviously because I want to save other people. I had this series, NEED, where the main character, Zara, witnesses her bonus-dad die of a heart attack and then she gets all involved with Amnesty International (a human rights organization) and really wants to make a big difference in saving the world. It’s seven years after I started that series and I finally realized this was a complete self-insertion. My bonus dad died when I was going into sixth grade, also of a heart attack. I also tried to save him (and I did once, but he died again). I also was a big volunteer for Amnesty International in high school. Sadly, though, I never turned into a human-sized, kick-butt pixie.

It took me writing Mana as she struggles with her new role as someone who can save rather than be saved, for me to realize that this is such an issue about me. I spend so much of my time volunteering (passing out wheelchairs, creating playgrounds, kids book festivals, literacy projects, working to end polio, working to end human trafficking) and it’s all because I couldn’t save my dad when he had a heart attack.

One of my superhero skills is definitely not self awareness.

I am currently working on three books. I do this because I get terrified that I’ll have writers block and not be able to write at all, but just stare blankly at the computer screen forever. I’m also terrified that I won’t always be lucky enough to be a writer as a living. This way if I get writers block on one story, I can move to the next and not hyperventilate and freak out. This is how I deal with my fear. Obviously, I am all about the fear.

The three books I’m working on right now are:
Cough. That’s a lot of death, isn’t it? 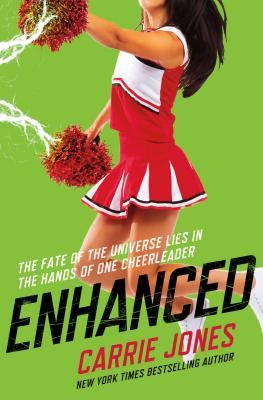 Seventeen-year-old Mana has found and rescued her mother, but her work isn't done yet. Her mother may be out of alien hands, but she's in a coma, unable to tell anyone what she knows.

Mana is ready to take action. The only problem? Nobody will let her. Lyle, her best friend and almost-boyfriend (for a minute there, anyway), seems to want nothing to do with hunting aliens, despite his love of Doctor Who. Bestie Seppie is so desperate to stay out of it, she's actually leaving town. And her mom's hot but arrogant alien-hunting partner, China, is ignoring Mana's texts, cutting her out of the mission entirely.

They all know the alien threat won't stay quiet for long. It's up to Mana to fight her way back in.

Carrie Jones likes Skinny Cow fudgsicles and potatoes. She does not know how to spell fudgsicles. This has not prevented her from writing books. She lives with her cute family in Maine, but she grew up in Bedford, NH where she once had a séance with cool uber-comedian Sarah Silverman.

The Meyers brothers are from Bedford, too, so you’d think it would make Carrie funnier, coming from Bedford N.H. Obviously, something didn’t work.

Carrie has a large, skinny white dog and a fat cat. Both like fudgicles. Only the cat likes potatoes. This may be a reason for the kitty’s weight problem (Shh… don’t tell). Carrie has always liked cowboy hats but has never owned one. This is a very wrong thing. She graduated from Vermont College’s MFA program for writing. She has edited newspapers and poetry journals and has recently won awards from the Maine Press Association and also been awarded the Martin Dibner Fellowship as well as a Maine Literary Award.

Here’s the lowdown about Carrie…

1. Carrie can not drink coffee. It makes her insane. Do not give her caffeine.
2. Carrie is very responsive to loving strokes on the hair, kind of like a puppy. However, do not do this without asking first unless you are a ridiculously handsome man or an editor who is about to offer her a trillion dollars for the first draft of her novel.
3. Carrie is secretly really, really shy even though she’s pathetically outgoing in person. She has a very hard time calling people. So, if you want to talk to her, make the first move. And, if you’re her in-Maine female best friend, Jennifer, do NOT get mad at her because she is so bad at returning emails.
4. Carrie sometimes wears mismatched socks, if you do not think this is cool, do not tell her. You will hurt her feelings.
5. Carrie really, really wants you to like her books. Please like her books. PLEEEAASSSEEEE. She’ll be your best friend forever. That is, if you want a friend who is shy about calling and emailing and who wears mismatched socks and can’t drink caffeine and likes being pet on the head. Hhmmm….
6. Carrie is not above begging.
7. Carrie, like Belle in TIPS ON HAVING A GAY (ex) BOYFRIEND drinks Postum. It’s for the same reason, too.
8. Carrie loves Great Pyrenees dogs. They are huge and white, and furry and it looks like they have white eyeliner and mascara on, which is way too cute. Do you have one? Send a picture!
9. Carrie lives in Maine. She has a hard time with this in the winter. It is bleak in Maine in the winter. Imagine everything shades of gray and brown and no green anywhere except for in people’s noses. This is Maine in Winter. Maine in summer is the best place in the world, so it’s a trade-off. Feel free to invite Carrie to your house in the winter, but not if it’s in Greenland, Canada, or anywhere north of Florida.
10. Forget that. She’d still probably come.

Have you had a chance to read ENHANCED, yet?

What kind of impossible situations do you like to put your characters in?

And can you stand to let them struggle to get out of them mess you created?