Happy Monday! This week we're featuring a few really awesome giveaways including two sequels, CRYSTAL BLADE and FEROCIOUS. Make sure to enter to win below and check out all the other awesome books being released this week! 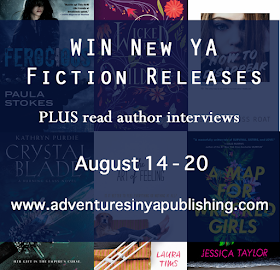 The peace is unsustainable.

Sonya and Anton may have brought about a revolution, but can they protect their homeland—and their love—with so many forces threatening to tear them apart?

The empire has fallen, Valko faces trial, and Sonya is finally free from her fate as Sovereign Auraseer. But Sonya's expanding abilities are just as unstable as the new government of Riaznin—and her relationship with Anton. Not only can she feel the emotions of others but, unlike other Auraseers, she's learned to make others feel her emotions as well. And Sonya isn't immune to dark temptations.

Now, as Sonya fights to contain her own darkness, she senses a new evil lurking in the shadows of the palace. Someone from Sonya's past has returned. And that someone won't be satisfied until Sonya pays for the mistakes she's made.

Paula Stokes returns to the world of Vicarious in this sequel, a high-action psychological thriller with a protagonist out for vengeance.

When Winter Kim finds out that her sister is dead and that she has a brother she never knew about, only two things matter―finding what’s left of her family and killing the man who destroyed her life. Her mission leads her from St. Louis to Los Angeles back to South Korea, where she grew up.

Things get increasingly dangerous once Winter arrives in Seoul. Aided by her friends Jesse and Sebastian, Winter attempts to infiltrate an international corporation to get close to her target, a nefarious businessman named Kyung. But keeping her last remaining loved ones out of the line of fire proves difficult, and when all seems to be lost, Winter must face one last devastating decision: is revenge worth sacrificing everything for? Or can she find a spark of hope in the darkness that threatens to engulf her?

Author Question: What is your favorite thing about Ferocious?

My favorite things about FEROCIOUS (I'm going to cheat because I can't decide) are the character development and the setting. The book takes place mostly in Seoul, South Korea, from the packed aisles at Namdaemun Market to the "anything goes" nightlife of Itaewon to the corporate skyscrapers of Gangnam-gu to the beaches of Jeju Island. I was lucky enough to live in Seoul for a year and I returned for a visit to do research for this book. If you think the USA is the most technologically advanced country, you should visit Korea or Japan. Seoul is an incredible mix of high-tech, concrete jungles and traditional ceremonies and temples. I know that I probably did not do it justice, but I tried. I love South Korea and I hope that FEROCIOUS conveys my respect for Korean culture, as well as encourages everyone to visit.

On character development. This is the second book in a series. In VICARIOUS, Winter is primarily working through the mystery of who killed her sister, Rose. The answer to that question is more complicated than she could ever imagine, and the fallout from learning the truth leaves her shattered, reeling, and desperate for revenge. At the start of FEROCIOUS she would gladly die as part of this revenge. But throughout the book, she not only discovers there are reasons to keep living, she unlocks pieces of herself, slowly coming to understand who she is and the person she could become someday. Will she make the ultimate sacrifice for vengeance? Or can she find her way through the darkness that threatens to engulf her?


Giveaway winners will be chosen and announced when our giveaway assistant, Shelly, returns from vacation in a few weeks. Sorry for the inconvenience.

Emma had always orbited Henri, her fierce, magnetic queen bee of an older sister, and the two had always been best friends.

Then the unthinkable occurs—a watery nightmare off the dazzling coast. The girls wash up on shore, stranded. Their only companion is Alex, a troubled boy agonizing over his own secrets. Trapped in this gorgeous hell, Emma and Alex fall together as Emma and Henri fall catastrophically apart.

To find their way home, the sisters must find their way back to each other. But there’s no map for this—or anything. Can they survive the unearthing of the past and the upheaval of the present?

Vicky Decker has perfected the art of hiding in plain sight, quietly navigating the halls of her high school undetected except by her best (and only) friend, Jenna. But when Jenna moves away, Vicky’s isolation becomes unbearable.

So she decides to invent a social life by Photoshopping herself into other people’s pictures, posting them on Instagram under the screen name Vicurious. Instantly, she begins to get followers, so she adds herself to more photos from all over the world with all types of people. And as Vicurious’s online followers multiply, Vicky realizes she can make a whole life for herself without ever leaving her bedroom. But the more followers she finds online, the clearer it becomes that there are a lot of people out there who feel like her— #alone and #ignored in real life.

To help them, and herself, Vicky must find the courage to face her fear of being “seen,” because only then can she stop living vicariously and truly bring the magic of Vicurious to life.

Perfect for fans of Jennifer Niven’s New York Times bestseller All the Bright Places, this contemporary YA novel explores the friendship between a girl in constant pain and a boy who feels nothing at all.

Since the car accident, Samantha Herring has been in pain, not only from her leg injury, but also from her mother’s death, which has devastated her family. After pushing away her friends, Sam has receded into a fog of depression.

But then Sam meets Eliot, a reckless loner with an attitude and an amazing secret—he can’t feel any pain. At first, Sam is jealous. But then she learns more about his medical condition…and his self-destructive tendencies. In fact, Eliot doesn’t seem to care about anything at all—except maybe Sam. As they grow closer, they begin to confront Sam’s painful memories of the accident—memories that may hold a startling truth about what really happened that day.

All the women in Iris and Malina’s family have the unique magical ability or “gleam” to manipulate beauty. Iris sees flowers as fractals and turns her kaleidoscope visions into glasswork, while Malina interprets moods as music. But their mother has strict rules to keep their gifts a secret, even in their secluded sea-side town. Iris and Malina are not allowed to share their magic with anyone, and above all, they are forbidden from falling in love.

But when their mother is mysteriously attacked, the sisters will have to unearth the truth behind the quiet lives their mother has built for them. They will discover a wicked curse that haunts their family line—but will they find that the very magic that bonds them together is destined to tear them apart forever?