Rachel Caine, author of ASH AND QUILL, on discipline carrying you where inspiration fails

ASH AND QUILL is the third book in The Great Library series, and we're excited to chat with Rachel Caine to learn more about it. 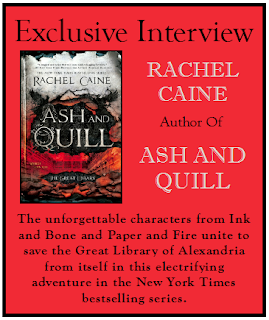 Rachel, what was your inspiration for writing ASH AND QUILL?

Ash and Quill is the third book in the series, but I really wanted to shift the focus ... Book 1 is about discovering the universe, and defining the challenges. Book 2 is about gathering the team for the fight, and learning the stakes. Book 3 is really about learning about each other, in very deep ways; all of the characters will face dark moments and real fears, and be forced to rely on each other in ways they never have before. It's the book where the team comes into its own ... and where they begin to realize the personal sacrifices that will be required to win this struggle in the next two books.

Without getting into spoilers, getting the group out of Philadelphia was incredibly difficult to write, both from a descriptive perspective and also from a personal one. There's so much destruction around us these days that it feels raw to write, and probably to read. But it was also the only way out.

I'm also really proud of the scenes toward the end when Jess turns everything around. It's the hardest thing I've ever asked a character to do, I think, and the consequences will be enormous.

I'd love to think that my readers would also love Leigh Bardugo's Six of Crows (I adore it, personally), and also Genevieve Cogman's Invisible Library series. There are lots more, but those two really stand out for me.

How long did you work on ASH AND QUILL?

Start to finish, the book took about four months.

Every book feels like it's my first book, in many ways; no matter how many I've done, there are always unique issues to overcome, and ASH AND QUILL was the first that surprised me by utterly refusing to be the last book in the series. It just wouldn't fit, no matter how many times I tried. Which is why the Great Library series is now five books instead of three.

But it also taught me to reach very deep on this book, into places that I was reluctant to go.

What do you hope readers will take away from ASH AND QUILL?

I hope that they will be desperate to read what Jess does next, because ASH AND QUILL certainly leaves everyone in a position of real risk ... and real opportunity to make the world a better place.

This is book fifty-ish for me (I'm not sure of the exact count!) so my road to publication is far, far behind me. In truth, I sold the first one I ever wrote, and I've sold almost everything I've written since. Weird, I know. But that's how it happened. I'm an outlier. Not that I haven't had things rejected, I have, but I've reworked them and tried again. I rarely give up.

I think it was the moment the story began to run in my imagination like its own movie, and all I had to do was write it down. At a certain point, it no longer felt like I needed to direct the story; the story knew where it was going. My subconscious steered the ship. That was a true turning point.

I always, always write to music (and make book playlists, too). I used to write quite a bit outside of my office/home, but the poor ergonomics of that have forced me to be much more careful about it; I'll never forget the morning I spent perched on a tall barstool, no back support, trying to type on a too-high table at a hotel. It was awful, and the pain wasn't worth it. So now I am much more careful about that, and I have an ergonomically-friendly home office. When I travel, I make sure my keyboard is at the right level to avoid wrist/neck strain, and my screen set high enough I don't have to bend down to see it. It takes a bit of innovation!

Discipline will carry you where inspiration fails. You have to show up. Not every day, but often enough that your brain becomes receptive to the work. If you have a full time job and/or family, write in short bursts, as often as you can; if you save it all up for "when I have time," it's not likely your life will cooperate, and neither will your muse.

I'm working on the second book of the new SF YA series I'm doing with Ann Aguirre! The first book, Honor Among Thieves, will be out in February 2018 from Harper Collins. The second book is called Honor Bound. After this is in, I work on book 4 of The Great Library. I also just released Stillhouse Lake, my first adult thriller, and it's doing extraordinarily well. 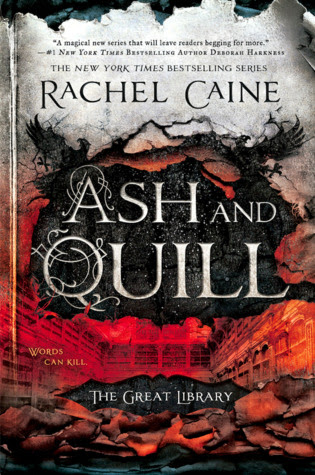 The unforgettable characters from Ink and Bone and Paper and Fire unite to save the Great Library of Alexandria from itself in this electrifying adventure in the New York Times bestselling series.

Hoarding all the knowledge of the world, the Great Library jealousy guards its secrets. But now a group of rebels poses a dangerous threat to its tyranny....

Jess Brightwell and his band of exiles have fled London, only to find themselves imprisoned in Philadelphia, a city led by those who would rather burn books than submit. But Jess and his friends have a bargaining chip: the knowledge to build a machine that will break the Library’s rule.

Their time is running out. To survive, they’ll have to choose to live or die as one, to take the fight to their enemies—and to save the very soul of the Great Library....

Rachel Caine's rich, diverse bibliography of more than 50 books in print covers many categories and genres. She started out writing horror and fantasy as Roxanne Longstreet (Stormriders, The Undead, Red Angel, Cold Kiss, Slow Burn) before switching to the name Roxanne Conrad and publishing romantic suspense and mystery (Copper Moon, Bridge of Shadows, Exile). By 2003, she began to publish under her current pseudonym, specializing in urban fantasy, science fiction, and paranormal young adult fiction.

She has been writing original fiction since the age of fourteen, and professionally published since 1991. She graduated from Socorro High School in El Paso Texas (where she was a UIL all-state champion in music and journalism) and went on to earn an accounting degree from Texas Tech University. She played professionally as a musician for several years once out of college, but ultimately gave up the music for writing.

She's had a varied "day job" career, including web design, graphic arts, accounting, payroll management, insurance investigation, and (most recently) corporate communications and crisis management. (It all counts as research.)

Rachel loves reading, writing, and mild amounts of arithmetic when required ... but she has a special place in her heart for history, music, and science, and you'll find those themes in many of her works.

Have you had a chance to read ASH AND QUILL yet? Do you have to drive your stories, or do they run like a movie in your imagination? Do you feel like every book is your first book? Is this helpful to your writing process? Share your thoughts about the interview in the comments!