Cory Putman Oakes, author of WITCHTOWN, on following a raw vegan diet to get details correct

We're excited to have Cory Putman Oakes stop by to chat about her latest novel, WITCHTOWN.

Cory, what was your inspiration for writing WITCHTOWN?

I’ve always really loved stories about witches – they tend to be outsider stories, about someone (a witch) who wants to fit in with the “normal folk” but can’t (and eventually discovers that fitting in is overrated). I thought it might be fun to tell that same “outsider” story but to flip the situation – what if all the “normal folk” were witches? What would that look like? What would be the story there? The idea of WITCHTOWN grew from there, but that idea (and the thought of being able to create a town inhabited solely by witches!) was what got me started.

Two of the characters in WITCHTOWN are raw vegans and, without giving too much away, there’s a scene in the book where one of them eats pizza (decidedly non raw, non vegan, pizza). When I was researching this book, I followed a raw vegan diet for a week, just to make sure I got the details correct. I’ve been a vegetarian since I was 13 so I thought raw vegan would be easy – but I was WRONG! Not being able to eat anything that is cooked or processed with any sort of heat – it was kind of brutal, honestly, especially because of my deep and all encompassing love of cheese. I dreamed about pizza every night of that week. So when I needed to have a character fall off the raw vegan wagon, I knew the exact right food to do it with – PIZZA. Definitely one of my favorite scenes in the book!

How long did you work on WITCHTOWN?

I first emailed my agent about the idea in June of 2013 – before I’d written a single word. We sold the book in April of 2015 (to Houghton Mifflin Books for Young Readers) and it’s set to be published in July, 2017. So, almost four years – but during that time I was working on two other books as well, so I had to take breaks.

While I was writing WITCHTOWN, I was hyper sensitive to any mention of the word “witches” in publishing. I would hear one of two things: first, that witches were “totally hot right now” (which stressed me out because my book wasn’t done yet, so I was missing the “witch moment”) and second, that witches were “totally over” (which stressed me out because why was I wasting my time working on something that was never going to sell?) The fact that these two concerns were mutually exclusive did nothing to calm my nerves – because when you’re pouring your heart into something, nothing can alleviate your fear that nobody but you will ever love it.

Everything ended up being perfectly ok – I finished the book, we sold it quickly, and all was well. But I lost a lot of sleepless nights stressing over the timing. For the future, I’m going to try and recognize that I have no control over publishing trends. All I can do is concentrate on doing the best work I can. (And maybe limit my exposure to publishing news – at least when I’m really deep into a project!)

What do you hope readers will take away from WITCHTOWN?

For me, WITCHTOWN is about a girl discovering her own power. There’s a lot of cool stuff involved in that – heists, poltergeists, romance, spells, mysteries, etc. And all that stuff is (hopefully) lots of fun and entertaining to read about. But at its core, WITCHTOWN is a story about a girl discovering that she is more than what others have led her to believe she is – much more. I hope readers walk away from WITCHTOWN feeling empowered.

WITCHTOWN is my fourth published book, but I’ve written at least five others that, for various reasons, never quite “made it.” But I don’t regret writing those books – if I hadn’t, I wouldn’t have learned what I needed to learn in order to write the books that did make it.

I’ve never had that ultimate AHA moment where I thought I had the key to everything – but I’ve had a lot of mini AHA moments. I can’t speak to every writer’s experience but for me, every book is different. The things that worked for me on previous books don’t necessarily work on later books. So I’m not sure if there is such a thing as an ultimate AHA moment. For me, it’s about adding tools to my writing toolbox. I may not have the key to writing a novel, but I like to think that each project I complete gives me another tool (or two) that will ultimately make my writing better.

I work at home (while my kids are in school and it’s quiet) and also in coffee shops. I get very superstitious about it – if I have a really great writing day at a certain table, in a certain coffee shop, I’ll go back there again and again while I’m working on the same project. Currently, my kitchen table is my lucky spot—which is convenient, since unlike coffee shop tables, I don’t have to worry about total strangers sitting in it and ruining my writing mojo!

There’s a lot of “stuff” about publishing that has nothing to do with writing – there’s pressure to be on social media, to promote yourself, to stay current on every publishing news story, etc. That stuff is important, to a certain extent. But that stuff is not writing. Writing is butt-in-chair time. It’s literally you with your butt in a chair sitting in front of your computer. More butt-in-chair time equals more words, more books, more tools in your writer tool box. Don’t sacrifice your butt-in-chair time for anything. Every other writer-related-activity pales in comparison to that. 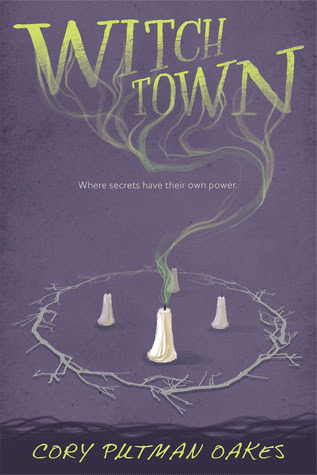 When sixteen-year-old Macie O’Sullivan and her masterfully manipulative mother Aubra arrive at the gates of Witchtown—the most famous and mysterious witch-only haven in the world—they have one goal in mind: to rob it for all it’s worth.

But that plan derails when Macie and Aubra start to dig deeper into Witchtown’s history and uncover that there is more to the quirky haven than meets the eye.

Exploring the haven by herself, Macie finds that secrets are worth more than money in Witchtown.

Secrets have their own power.

Cory Putman Oakes was born in Basel, Switzerland, but grew up in Novato, California and attended Marin Catholic High School. She then spent three fantastic years at the University of California at Los Angeles before graduating in 2001 with a B.A. in Psychology. In 2004, Cory graduated from Cornell Law School with a Juris Doctorate Degree and her husband, Mark (the first was the intended consequence of attending the school, the second was a bonus). Since then, she has been an associate at a big law firm, taught business law to undergraduates at Texas State University and written several books for young people.

Cory now lives in Austin, Texas with Mark and their two kids. In addition to writing, Cory enjoys reading, cooking, running, and hanging out with her family and pets.

Have you had a chance to read WITCHTOWN yet? Do you get caught up in trends discussions about your novel idea? Do you have superstitions that need to be followed to help with your writing mojo? Share your thoughts about the interview in the comments!