WoW: From Concept to Book Trailer with Rachel Caine

From Concept to Book Trailer
By Rachel Caine
I've done a lot of books, but ASH AND QUILL marked the first time that I've tackled something that turned out to be bigger than I ever anticipated. ASH AND QUILL is the first book I've had to completely rewrite three times, only to discover that it isn't, in fact, an ending ... but the beginning of the ending.

Originally when I laid out the idea for The Great Library, it was an orderly enough trilogy structure: Ink and Bone, Paper and Fire, Ash and Quill. All neatly laid out.

But this story isn't that simple, and it never went where I supposed it would--or, more accurately, there was always more to what happened than was visible from the distance of my plans.

The world of The Great Library has surprised me at every turn, and that is a very good thing, because it forced me to reach deeper and deeper into the characters, the world, and the consequences of every action. That's come to a head in ASH AND QUILL, where Jess Brightwell and his friends start from a position of absolute helplessness: they are Librarians, however rebellious, held captive in a Burner city under siege by Library troops. If the Burners don't kill them, the Library surely will, once they realize Christopher Wolfe, Jess Brightwell, and Thomas Schreiber are inside those walls. So they must find a way first to survive, and second to successfully escape, against odds that seem absolutely zero.

This story began as an adventure and quickly became a test of endurance, strength, character and cleverness for all of them, and I'm very proud of the results. Jess will make moves that are against all his instincts and will, but he'll make them for the best of all reasons: to save his friends, and to save the Library itself.

That's not to say the other characters don't also have important roles to play. I think the bonds between them have never been stronger, or more vital to their survival, than in this book. And I hope that it will make you all fall in love with them even more.

I'm so excited to present to you the exclusive trailer for THE GREAT LIBRARY: ASH AND QUILL!

I'm a bit of a strange bird, as an author; I have had a ton of different jobs, many of which taught me important and interesting skills. As a corporate communications person, I was asked to learn video editing to put together some internal videos, and I became fascinated with the process.I discovered resources, like Shutterstock, iStockphoto, Dreamstime, and many more, where you can legally license royalty-free images and footage for reasonable fees, and other sources for audio tracks.

Via the site Voice123.com, I located the narrator for this trailer; I prefer to use professional voice actors where possible, and I spent probably the most time finding just the right voice for Dario Santiago. (It took a pro narrator less than 10 minutes to deliver perfect audio after being hired for the job!)

In total, the trailer took me about 4 hours of work to craft together.

For editing, I use Adobe Premiere Pro, which has powerful abilities that I seriously underutilize, but in my defense, I'm an author who does trailers, not a pro user. You can do everything with Premiere Pro.

I'd be remiss in not also mentioning my friend Littleheaven, who inspired me and taught me the basics of matching music to visuals through her amazing fan videos; the best fan videos are up there with the best work in movie trailers!

So here's a little about the trailer:

•   NARRATOR: Dario Santiago is played by Ramesh Mahtani, a voice actor who lives in Spain
•   FOOTAGE: All video is licensed RF footage from Shutterstock.com and iStockPhoto.com
MUSIC: Productiontrax.com

ASH AND QUILL launches in stores on July 11, and I hope you will join me for this, and the next two books in the epic struggle to save the soul of the Great Library of Alexandria.

Check out the trailer! 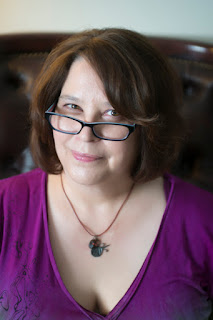 About Rachel Caine
Rachel Caine's rich, diverse bibliography of more than 50 books in print covers many categories and genres. She started out writing horror and fantasy as Roxanne Longstreet (Stormriders, The Undead, Red Angel, Cold Kiss, Slow Burn) before switching to the name Roxanne Conrad and publishing romantic suspense and mystery (Copper Moon, Bridge of Shadows, Exile). By 2003, she began to publish under her current pseudonym, specializing in urban fantasy, science fiction, and paranormal young adult fiction.
Kelly deVos at 8:00 AM