Thomas E. Sniegoski, author of MONSTROUS, on this novel being like a Summer movie

MONSTROUS is the second book in the Savage series, and we're thrilled to be joined by Thomas E. Sniegoski to tell us more about it. 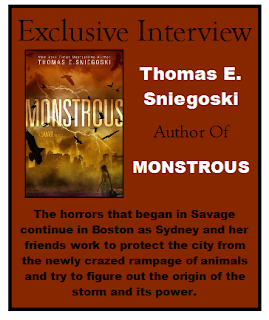 Thomas, what was your inspiration for writing MONSTROUS?

MONSTROUS is the sequel to my novel from last year, SAVAGE. My inspiration came from a series of novels that I read when I was younger, and first starting to get into reading. All these novels, but all kinds of writers, depicted a scenario where a certain animal (Rats, Cats, Bugs of all kinds, Dogs, Bats, etc.) in a town, or city, suddenly went berserk, attacking and killing anyone that they happened to come across. The novels were usually extremely gruesome, and violent, but there was something incredibly fun about them. I always promised myself while reading them that I would write something like it one day. SAVAGE was that novel, and with MONSTROUS, I got to continue the story making it bigger and hopefully scarier!

I don't want to give too much away, but there are a bunch of scenes that take place in a hospital for the brain injured in Boston. Those scenes were incredibly hard to write due to the fact that I wanted to get all my medical stuff right. Thankfully, my wife is a RN (Registered Nurse) with close to thirty years experience, and she loves to do research.

I'm actually very proud of all the hospital scenes. They were really tough, especially since I had to kind of build this high tech medical facility inside my head and make it totally believable.

Like I said, I hate to give stuff away, but there's a really cool scene that takes place out on the water and it involves a Great White Shark. That was a blast to write.

Not sure if anybody writing in YA is doing killer animal stuff. HAHAHAHA! If people wanted to track down some of those books that I was talking about, the best of the writers was a guy named James Herbert. He wrote an entire series of books . . . I think there were at least four of them, about killer rats in London. The first book was called THE RATS. Really nasty stuff, but incredibly fun.

Anybody who enjoys a good thriller . . . something that makes their skin crawl, and puts them in a situation where while they're reading they say, "Hmmm, how would I react in this situation?" That's the kind of book MONSTROUS, and SAVAGE, are.

How long did you work on MONSTROUS?

MONSTROUS took about four months to write, and then there was the whole editing process after, which forced me to cut the book down to make it move faster.

MONSTROUS taught me that I have a pretty twisted brain. HAHAHAHAHAHAHA! Some of the stuff that I came up with made me smile, and shake my head. As far as technically, it showed me that in order to work as a thriller, it needed to move quickly at all times . . .no lag time . . . never give the reader too long to relax. Keep them on the edge of their seats at all times.

What do you hope readers will take away from MONSTROUS?

MONSTROUS (as well as SAVAGE) are like Summer movies. Big and exciting and scary as all get out! I want people to have a good time . . . as well as to get their hearts racing a bit.

I started out writing comics for almost every major publisher, and then started my book career. I've written close to forty books before this one, and I don't have any that weren't published. There are plenty of outlines and proposals, and sample chapters, but no full novels that haven't been published.

The closet thing to an AHA! moment came when I realized that the key to writing a book is to keep going . . . always moving forward . . .not worrying about everything being perfect then, and remembering that everything can be revised when you're done. A sloppy first draft is still better than unfinished one.

I try to make it as close to a 9 to 5 job as I can. I sit down early in the morning, do what I do, and wrap up at a typical work quitting time. I do listen to music . . . classical stuff, as well as movie soundtracks help me get through the scenes. I always work at home . . . have a difficult time focusing when I'm anywhere else. Too many distractions.

I know it's going to sound obvious, but write . . . write all the time. Write about everything and anything. Keep a journal, develop your style . . . develop your writing identity. And also read . . . read everything. Even stuff you might not like. Use what you read to develop that style . . . pick and choose characteristics of all writing to build your own unique style.

Currently I'm working on this amazing all ages book which is a combination of prose writing, and comic book story telling. Each of these different styles blend into one another as the story progresses. I can't say the title yet, because it hasn't been announced . . . but it's actually based roughly on my dog, a nasty little French bulldog with an attitude problem. It's coming together spectacularly! And I've also got a few comic book projects in development right now as well. 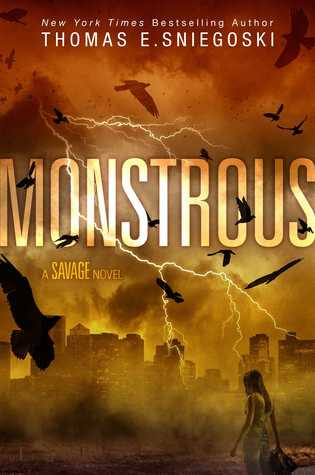 Sidney and her friends might have survived the storm that came to the small island of Benediction, but now the storm has reached Boston, and the city isn’t prepared for what’s coming in this sequel to the “unpredictable” (VOYA) and “fast-paced” (School Library Journal) Savage from New York Times bestselling author Thomas E. Sniegoski.

The horrors that began in Savage continue in Boston as Sydney and her friends work to protect the city from the newly crazed rampage of animals and try to figure out the origin of the storm and its power.

Thomas E. Sniegoski is the author of more than two dozen novels for adults, teens, and children. His teen fantasy YA series Fallen was adapted into a trilogy of monstrously successful TV movies by ABC Family Channel. His other books for teens include Sleeper Code, Sleeper Agenda, and Force Majeure, as well as the upcoming series The Brimstone Network. The author's first adult novel, A Kiss Before the Apocalypse, hit the shelves in 2008, with its sequel, Dancing on the Head of a Pin to be released in 2009.

Have you had a chance to read MONSTROUS yet? Have you worked in another genre like comic books before turning to novels? What made you switch your style? Do you feel like that background helped influence your own personal voice and style? Share your thoughts about the interview in the comments!