Kimberly McCreight, author of THE SCATTERING, on an extremely long and exceedingly bumpy road to publication

THE SCATTERING is book 2 in the Outliers series, and we're delighted to have Kimberly McCreight stop by to chat about it. 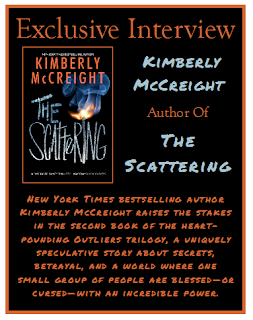 Kimberly, what is your favorite thing about THE SCATTERING?

My favorite thing about The Scattering is probably the way that Wylie’s personal journey dovetails with the action and adventure of the story. The Outliers trilogy looks at how the world might react if we discovered women possessed an ability—Heightened Emotional Intelligence— that men did not. But it is also the story of one girl trying to make sense of herself in the world, the way we all must do. It’s this push and pull between the broader and more intimate themes that I like the most about the way the book works.

Like many writers, my road to publication was extremely long and exceedingly bumpy. It took me over ten years and five completed novels before I ever sold one to a publisher. That first novel was Reconstructing Amelia, my first adult novel.

For me, it was after I wrote a very early draft of Reconstructing Amelia—and again this is after several previous failed attempts to sell novels to a publisher—and my agent thought that one storyline in Amelia really needed to change. The novel has two alternating timelines and one was really weak at the time. More to the point, the two storylines never converged in that early draft.

Once I realized I needed to do that—and figured out how to do it—it was obvious to me that had been the problem in so many of my earlier, unsold manuscripts. It really was an “aha” moment for me in the most profound way.

I have a desk at the Brooklyn Writers Space and I write there every day from 9 a.m. to 7 p.m. If I’m not on a deadline, I try to write only during weekdays, but that will go out the window if something is due. I wrote all my other books at a local coffee shop, but after a few years of spending eight hours a day there, it seemed time to make a change. As for what I listen to, it will depend what stage I am at. Usually, I need to edit with silence, but when I am drafting new material, playing music works best to keep the non-writing part of my brain from getting in the way.

Get a great feedback group or partner. (A group is best if you can find one, if only because opinions vary.) Regardless, it’s impossible to improve in a vacuum. But you need thoughtful readers so that you can learn what is and what isn’t working. And be sure to find people who will be both honest and constructive. And they needn’t be writers themselves, only thoughtful readers. Anyone can tell you when they get bored or things stopped making sense.

I’ve just finished a draft of the third book in the Outliers trilogy, and I’m getting ready to start my next standalone adult mystery, but all the details on that are, so far, still under wraps!

New York Times bestselling author Kimberly McCreight raises the stakes in the second book of the heart-pounding Outliers trilogy, a uniquely speculative story about secrets, betrayal, and a world where one small group of people are blessed—or cursed—with an incredible power.

Wylie may have escaped the camp in Maine, but she is far from safe. The best way for her to protect herself is to understand her ability, fast. But after spending a lifetime trying to ignore her own feelings, giving in to her ability to read other peoples’ emotions is as difficult as it is dangerous.

And Wylie isn’t the only one at risk. Ever since they returned home, Jasper has been spiraling, wracked with guilt over what happened to Cassie. After all they’ve been through together, Wylie and Jasper would do anything for each other, but she doesn’t know if their bond is strong enough to overcome demons from the past.

It is amid this uncertainty and fear that Wylie finds herself confronted with a choice. She was willing to do whatever it took to help Cassie, but is she prepared to go to the same extremes to help complete strangers . . . even if they are just like her?

Kimberly McCreight is the New York Times bestselling author of Reconstructing Amelia, which was nominated for the Edgar, Anthony, and Alex Awards and was called Entertainment Weekly’s Favorite Book of the Year. Reconstructing Amelia has been optioned for film by HBO and Nicole Kidman’s Blossom Films. Ms. McCreight’s second adult novel, Where They Found Her, was a USA Today bestseller and a Kirkus Best Mystery of the Year. The Outliers, the first book in her teen trilogy, also a New York Times bestseller, has been optioned for film by Lionsgate, Mandeville, and Reese Witherspoon’s Pacific Standard. The second book in the trilogy, The Scattering, will be published in May 2017. Ms. McCreight attended Vassar College and graduated cum laude from the University of Pennsylvania Law School. She lives in Brooklyn, New York, with her husband and two daughters.

Have you had a chance to read THE SCATTERING yet? Do you have a dedicated space outside your home for writing? Do you have thoughtful readers to help you learn what is and what isn’t working? Share your thoughts about the interview in the comments!