Cora Carmack, author of ROAR, on writing things that scare her

We're excited to have Cora Carmack with us to give us the scoop on her YA debut, ROAR. 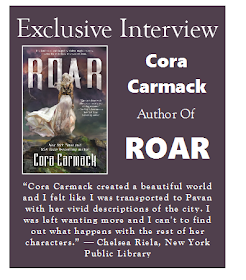 Cora, what was your inspiration for writing ROAR?

I grew up in Texas in Tornado Alley. From a really young age, I was fascinated with storms. I would always beg to sit on the front porch and watch the clouds for funnels. So, one day during an interview, I was talking about how I’d always wanted to write a book about storm chasers, but hadn’t had the chance because it would require so much research. Then I jokingly said that maybe it would be easier to write a fantasy book about magic storms, and then I could just make up the research. Almost immediately, the idea of magic storms took hold of me and wouldn’t let go. Because what’s more beautiful and devastating than a storm? ANSWER: A MAGIC storm.

I love to read fantasy - more specifically, I love to read fantasy romance. I like epic worlds and amazing plot and consuming romance. So that’s what I aimed to write with ROAR. I hope it will appeal to fans of C.L. Wilson (whose fantasy romances I LOVE) and readers of Sarah J. Maas’s kick ass fantasies. I also hope fans of Kristin Cashore and Rae Carson will find something to love in ROAR. And if you love my book, and haven’t read any of the above authors, I’m jealous. I wish I could read them for the first time again!

This book scared the living daylights out of me. Mostly because I wanted it so bad. My first dream was writing YA fantasy, and though I’ve had success writing adult romance, YA Fantasy still felt like this huge, unattainable dream. And even once I’d sold the book to Tor Teen based on a proposal, the fear was huge because I wanted to live up to this cool idea and world. There were moments during the writing process where I thought I’d never finish. At times, I worried I had made a grave mistake and reached too far and that I would disappoint everyone. But in the end, the only way to write a book is one word at a time. And when I look back, I’m still not entirely sure how all of this book came together, but I’m incredibly proud of it. And moving forward, I know I’m going to keep writing things that scare me. It can be easy as an established author to only focus on what’s marketable, what’s most likely to sell, what’s on brand, etc. But when a book scares you as an author, I think we leave a bit more of ourselves in it than the average book. It holds a bigger piece of our heart.

Do the work. Research as much as you can—about craft, about the industry, about your genre. Learn as much as you possibly can. Then once you’ve learned as much as you can, shut out all those outside voices, and try to listen only to your own. Dig deep inside yourself and figure out what story speaks to you, and more importantly what story can only be told by you. 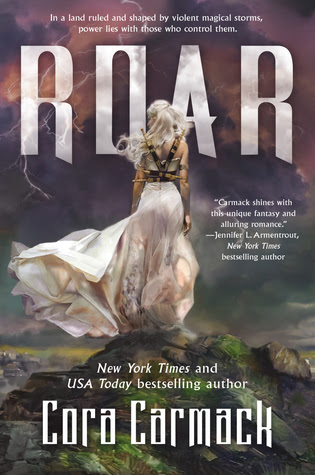 In a land ruled and shaped by violent magical storms, power lies with those who control them.

Aurora Pavan comes from one of the oldest Stormling families in existence. Long ago, the ungifted pledged fealty and service to her family in exchange for safe haven, and a kingdom was carved out from the wildlands and sustained by magic capable of repelling the world’s deadliest foes. As the sole heir of Pavan, Aurora’s been groomed to be the perfect queen. She’s intelligent and brave and honorable. But she’s yet to show any trace of the magic she’ll need to protect her people.

To keep her secret and save her crown, Aurora’s mother arranges for her to marry a dark and brooding Stormling prince from another kingdom. At first, the prince seems like the perfect solution to all her problems. He’ll guarantee her spot as the next queen and be the champion her people need to remain safe. But the more secrets Aurora uncovers about him, the more a future with him frightens her. When she dons a disguise and sneaks out of the palace one night to spy on him, she stumbles upon a black market dealing in the very thing she lacks—storm magic. And the people selling it? They’re not Stormlings. They’re storm hunters.

Legend says that her ancestors first gained their magic by facing a storm and stealing part of its essence. And when a handsome young storm hunter reveals he was born without magic, but possesses it now, Aurora realizes there’s a third option for her future besides ruin or marriage.

She might not have magic now, but she can steal it if she’s brave enough.

Challenge a tempest. Survive it. And you become its master.

Cora Carmack is a twenty-something writer who likes to write about twenty-something characters. She's done a multitude of things in her life-- boring jobs (like working retail), Fun jobs (like working in a theatre), stressful jobs (like teaching), and dream jobs (like writing). She enjoys placing her characters in the most awkward situations possible, and then trying to help them get a boyfriend out of it. Awkward people need love, too. She is the New York Times and USA Today bestselling author of the Losing It series.

Have you had a chance to read ROAR yet? Do you write books that scare the living daylights out of you? After learning all you can, are you able to listen only to your own voice? Share your thoughts about the interview in the comments!