Andrew Shvarts, author of ROYAL BASTARDS, on not falling into the "genre trap"

We are honored to sit down with author Andrew Shvarts as he enlightens us about his debut novel, ROYAL BASTARDS. 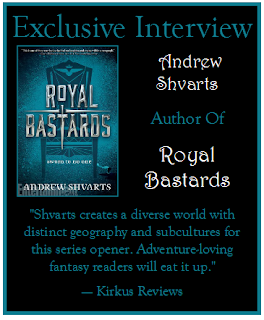 Andrew, what was your inspiration for writing ROYAL BASTARDS?

Like a lot of my stories, ROYAL BASTARDS was the combination of two different ideas. First, I really wanted to write a 'teens on the run' story, like if The Breakfast Club got framed for a murder and had to become fugitives to clear their names. I was also really drawn to writing a YA Game of Thrones, a story that captured that series' intrigue and violence and grounded world-building, but through an explicitly young adult filter. And then one day I realized these two ideas were actually the same story! After that, the pieces clicked together really quickly, and I had a first chapter done by the end of that day.

The standard advice is, of course, read constantly, write constantly. I'd add to that to do both as broadly and diversely as possible. One of the biggest pitfalls I see young writers fall into is what I'd call 'the genre trap', where they limit their artistic scope, both in terms of consumption and creation, to one small genre, or even worse, to one book. The more genres you understand, the better your innate understanding of story will be, and the more likely you are to succeed. For a while in my early 20s, I was stuck in a rut, churning out horror and dark fantasy short stories, and getting nowhere. Then I got a job writing fluffy, G-rated, middlegrade comedy, and it forced me to totally relearn how to tell a story. I had to let go of all the tropes I was attached to, and I learned so much more from it than if I'd just stayed in the familiar genres I loved. The truth is, like most extremely competitive industries, there's a fair amount of luck involved in publishing, in writing the right story at the right time. The more stories you write, and the more varied they are, translates to more and more bets placed on the table, which increases your chances of striking a hit.

I'm an incredibly fidgety person in the calmest of times, and that goes out of control when writing. I can pretty much only do it at home, because I'm a hyper mess; I pace around the room, jump up and down, twirl pens, and frequently spill my coffee. It feels like 90% of the process happens in that restless headspace, and then the rest of the work is just committing it to paper. I also say all my dialogue out loud, in character, which I'm pretty sure terrified the people around me the few times I've had to write in public.

The sequel to Royal Bastards! I can't say too much, but I just wrote a scene involving revolutionaries, assassins, and a masquerade ball that I can't wait to share with the world.

Being a bastard blows. Tilla would know. Her father, Lord Kent of the Western Province, loved her as a child, but cast her aside as soon as he had trueborn children.

At sixteen, Tilla spends her days exploring long-forgotten tunnels beneath the castle with her stablehand half brother, Jax, and her nights drinking with the servants, passing out on Jax’s floor while her castle bedroom collects dust. Tilla secretly longs to sit by her father’s side, resplendent in a sparkling gown, enjoying feasts with the rest of the family. Instead, she sits with the other bastards, like Miles of House Hampstedt, an awkward scholar who’s been in love with Tilla since they were children.

Then, at a feast honoring the visiting princess Lyriana, the royal shocks everyone by choosing to sit at the Bastards’ Table. Before she knows it, Tilla is leading the sheltered princess on a late-night escapade. Along with Jax, Miles, and fellow bastard Zell, a Zitochi warrior from the north, they stumble upon a crime they were never meant to witness.

Rebellion is brewing in the west, and a brutal coup leaves Lyriana’s uncle, the Royal Archmagus, dead—with Lyriana next on the list. The group flees for their lives, relentlessly pursued by murderous mercenaries; their own parents have put a price on their heads to prevent the king and his powerful Royal Mages from discovering their treachery.

The bastards band together, realizing they alone have the power to prevent a civil war that will tear their kingdom apart—if they can warn the king in time. And if they can survive the journey . . . 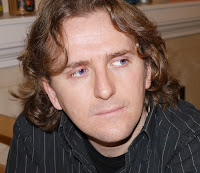 Andrew Shvarts has a BA in English Literature and Russian from Vassar College. He works for Pixelberry Studios as a designer, making mobile games like High School Story, Choices, and more. Andrew lives in San Jose, California, with his wife, toddler, and two kittens. Visit him online at andrewshvarts.com and on Twitter @Shvartacus.

Have you had a chance to read ROYAL BASTARDS yet? Have you fallen into the "genre trap"? What is the genre that you are trapped in? Do you have recommendations for others who might be stuck in a genre trap? Share your thoughts about the interview in the comments!