A.J. Hartley, author of FIREBRAND, on being bolder in what he is doing

We are thrilled to be joined by A.J. Hartley to learn more about the second book in the Steeplejack series, FIREBRAND. 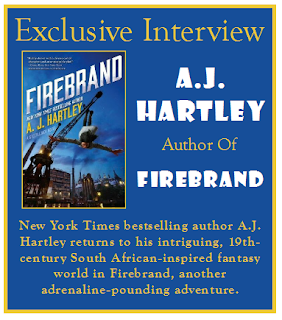 A.J., how long did you work on FIREBRAND?

All told, I worked on it for about a year, but I'd been thinking about it for longer, since I knew that what had begun as a single book was going to be a series before STEEPLEJACK came out. I tend to do the first draft fairly quickly--in a couple of months--once I have a sense of the story I want to tell, because I get excited about it and have to get it out. In fact, I think, I NEED that excitement to write the book, and some of it is about not knowing precisely where the story is going. I work from a very general outline but I leave a lot open to discover as I go, so I never know exactly how a book will end (or how I'll get to that ending) when I first start drafting. It keeps the process edgy and compelling for me, because I feel a little but more like a reader being surprised by the twists and turns of the story. That also means I need plenty of editing time to make sure it all makes sense and to polish up the sentence-level writing once the first draft is done.

This book taught me to be bolder in what I was trying to do, to be--like Ang--braver in what I was prepared to tackle and, when I felt daunted by a subject, to dig in and learn about it, rather than to back off, assuming I couldn't do it. There's a lot in this book where I feel like I'm taking chances--in a good way--and I found myself sending it to friends (as well as my awesome editor, Diana Pho) and asking them to flag any moments which felt wrong-headed or false. That's especially important when you are writing about a complex political situation involving different racial groups, for instance. The first book in this series taught me a necessary humility when facing these kinds of issues, but in this book that humility--constantly checked through other readers--paradoxically built a kind of confidence: I felt surer footed (again, like Ang up there on the roofs of the tallest buildings of Bar-Selehm) and that allowed me to make stronger choices and wrestle with more urgent ideas.

No music, no coffeeshops for me. I need silence and no distraction. The music has to come from the words I write. I like to speak aloud as I write because hearing the phrasing is important to me. That means that I need the house to myself, at least while I'm doing first draft writing. I'm less picky when I'm editing :) I know it's working when I start to write and then realize I've been at it for 5 hours or more and barely noticed. Then I have to get something to eat before I pass out :)

I've just turned in the first draft of the 3rd Steeplejack series, so I'm working on edits for that. I'm also working on a series I do with Tom DeLonge (of Blink 182 fame) which is a lot of fun, but quite different in tone to this series.

Once a steeplejack, Anglet Sutonga is used to scaling the heights of Bar-Selehm. Nowadays she assists politician Josiah Willinghouse behind the scenes of Parliament. The latest threat to the city-state: Government plans for a secret weapon are stolen and feared to be sold to the rival nation of Grappoli. The investigation leads right to the doorsteps of Elitus, one of the most exclusive social clubs in the city. In order to catch the thief, Ang must pretend to be a foreign princess and infiltrate Elitus. But Ang is far from royal material, so Willinghouse enlists help from the exacting Madam Nahreem.

Yet Ang has other things on her mind. Refugees are trickling into the city, fleeing Grappoli-fueled conflicts in the north. A demagogue in Parliament is proposing extreme measures to get rid of them, and she soon discovers that one theft could spark a conflagration of conspiracy that threatens the most vulnerable of Bar-Selehm. Unless she can stop it.

He was born in northern England, but has lived in many places including Japan, and is currently the Robinson Professor of Shakespeare studies at the University of North Carolina, Charlotte, where he specializes in the performance history, theory and criticism of Renaissance English drama, and works as a director and dramaturg.

Have you had a chance to read FIREBRAND yet? When you are writing words or conversations down, do you sometimes speak them out loud? Can you tell the difference in drafts where you have and have not practiced this? Are you learning to be bolder with your writing? Where is this new boldness taking you? Share your thoughts about the interview in the comments!