Veronica Chambers, author of THE GO-BETWEEN, on the beauty of friendship

We are thrilled to have Veronica Chambers join us to share more about her latest novel, THE GO-BETWEEN.

Veronica, what was your inspiration for writing THE GO-BETWEEN? 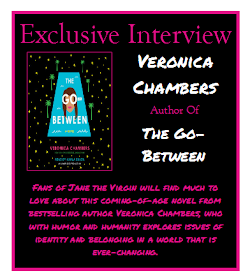 I really wanted to write a novel about a Latina girl who had a different experience than one we normally see in popular culture. So I thought it would be fun to write about a girl who was affluent, but when she shows up at a new school in California, everyone assumes she's poor and from East LA because she's Mexican.

A book that made a big impression on me early on was Ana Menéndez' "In Cuba I was a German Shepherd."

I always loved that line: "Here in America, I may be a short, insignificant mutt, but in Cuba I was a German shepherd."

That's what Cammi's story felt like to me -- a story about a teenage girl who's falling into these precarious gaps of identity and perception.

I really liked writing the scenes with Sergio, Cammi's big brother. I love that he's this really smart, really inherently good guy. He sort of tells her, when you've got privilege, you only have one job -- don't be a jerk.

I am in love with Lilliam Rivera's "The Education of Margot Sanchez." which came out recently. I keep giving it to my people -- from my nieces to my grown-up girlfriends. Lilliam's voice is so razor sharp and the story has both style and heart.

How long did you work on THE GO-BETWEEN?

I worked on the Go-Between for almost two years. I had a day job, so it was a little bit of catch while catch can. Very common for writers.

What do you hope readers will take away from THE GO-BETWEEN?

I hope that readers will get that when it comes to this particular group of friends, there isn't really one person who's "racist" or the bad guy. (Although I have friends who say that Tiggy is really an unredeemable mess.)

I think that everyone in this group of friends makes mistakes and has some growing to do. I think that's the beautiful thing about friendship, especially when you're young that you grow up together.

I've written a lot of non-fiction, but fiction is still new and evolving for me. So a lot of unpublished fiction lingers in my bottom desk drawer!

I try to write early in the morning. It's been a huge process for me to transform from a night person into a morning person. But I love the morning writing -- it's clearer, for me and richer.

It can be hard to keep learning and growing outside of the classroom. Workshops are amazing. Worth it. Places like the Fine Arts Work Center and any local college workshop. Even online classes like Masterclass.com can be amazing. And there are of course, the great books. Annie Dillard's The Writer's Life. Twyla Tharp's "The Creative Habit: Learn It and Use It For Life." Jane Smiley's "13 Ways of Looking at the Novel."

I also think the Bindercon conferences in LA and New York are amazing if you can get to to them and they do offer some financial aid for different types of writers.

Another Y/A. I'm so excited.

Fans of Jane the Virgin will find much to love about this coming-of-age novel from bestselling author Veronica Chambers, who with humor and humanity explores issues of identity and belonging in a world that is ever-changing.

She is the envy of every teenage girl in Mexico City. Her mother is a glamorous telenovela actress. Her father is the go-to voice-over talent for blockbuster films. Hers is a world of private planes, chauffeurs, paparazzi and gossip columnists. Meet Camilla del Valle—Cammi to those who know her best.

When Cammi's mom gets cast in an American television show and the family moves to LA, things change, and quickly. Her mom's first role is playing a not-so-glamorous maid in a sitcom. Her dad tries to find work but dreams about returning to Mexico. And at the posh, private Polestar Academy, Cammi's new friends assume she's a scholarship kid, the daughter of a domestic.

At first Cammi thinks playing along with the stereotypes will be her way of teaching her new friends a lesson. But the more she lies, the more she wonders: Is she only fooling herself?

Veronica Chambers is a prolific author, best known for her critically acclaimed memoir, Mama's Girl which has been course adopted by hundreds of high schools and colleges throughout the country. The New Yorker called Mama's Girl, "a troubling testament to grit and mother love… one of the finest and most evenhanded in the genre in recent years." Born in Panama and raised in Brooklyn, her work often reflects her Afro-Latina heritage.

She coauthored the award-winning memoir Yes Chef with chef Marcus Samuelsson as well as Samuelsson’s young adult memoir Make It Messy, and has collaborated on four New York Times bestsellers, most recently 32 Yolks, which she cowrote with chef Eric Ripert. She has been a senior editor at the New York Times Magazine, Newsweek, and Glamour. Born in Panama and raised in Brooklyn, she writes often about her Afro-Latina heritage. She speaks, reads, and writes Spanish, but she is truly fluent in Spanglish. She is currently a JSK Knight fellow at Stanford University.

Have you had a chance to read THE GO-BETWEEN yet? When do you think your mind is the most clear? Morning or Night? Have you continued to learn "outside of the classroom"? What are some of the most beneficial workshops you have attended? Share your thoughts about the interview in the comments!