Brian Katcher, DEACON LOCKE WENT TO PROM, on being in Deacon's shoes himself

We are excited to be joined by Brian Katcher as he enlightens us on his latest novel, DEACON LOCKE WENT TO PROM.

Brian, what was your inspiration for writing DEACON LOCKE WENT TO PROM? 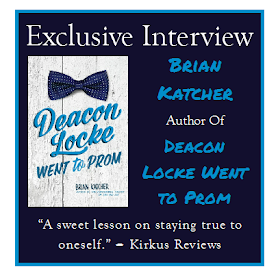 My editor, Claudia Gabel, actually came up with the general plot. Promposals are big now, and she gave me this assignment. I fell in love with the idea right away.

The prom scene was the most difficult, as it's there in the title and everything. I knew I couldn't screw that up. The most fun scene was where Deacon finally gets the courage to ask out Soraya, his dance instructor and she shows up at his house...with another guy. Been there myself.

CURE FOR THE COMMON UNIVERSE by Christian McKay Heidicker. Another great story about an awkward guy going on his first date in the most complicated way possible.

How long did you work on DEACON LOCKE WENT TO PROM?

About a year and a half, including rewrites.

To listen to my editor. I tried to avoid making Deacon a charmingly awkward guy at first and ended up with a character about as sexy and likable as Frankenstein's monster. When I took Claudia's advice and made him more human, the book wound up much better.

What do you hope readers will take away from DEACON LOCKE WENT TO PROM?

That it's easy to build a prison out of your own insecurities and that if you allow yourself to be ruled by your fears, you're going to miss out on a lot of great opportunities. Also, I hope my readers will view this books as the greatest work of literature ever penned by man.

I bought a copy of Writer's Market 2006 and wrote to every publisher in the US, Canada and the UK. They all turned me down. I was ready to give up on my first book, PLAYING WITH MATCHES, when I entered it into a contest and it caught the eye of an editor, the same editor I still work with today. I currently have three and a half unpublished books. One had actually been accepted for publication and I'd been paid the advance. We were discussing cover art when it was unexpectedly cancelled.

I cannot stand noise when I'm writing, no TV, no music. I lock myself in my office, pace the floor, talk to myself, edit Wikipedia, look up old friends, order crap online, and curse the day we got WiFi. At around one in the morning I tend to hit my stride, at which time I have to go to bed.

Don't give up. Twenty years ago, some editor passed on the full rights to the Harry Potter series.

A book written in four separate points of view. What on earth was I thinking?

In this funny, offbeat, and smile-inducing contemporary romance from award-winning author Brian Katcher, the love life of an awkward teen takes an unforgettable turn after he brings his grandmother to prom.

Promposals are taking over Deacon Locke’s high school and there is no place left to hide. But even with graduation looming, shy and unusually tall Deacon doesn’t think he can get up the nerve to ask anyone to the dance. Especially given all the theatrics.

It isn’t until Deacon confides in his witty and outgoing best friend Jean that he realizes she could be a great person to take. Only problem is Jean isn’t your typical prom date. She’s older. A lot older. And she’s Deacon’s grandmother.

But when Deacon meets Soraya—a girl unlike any other he’s ever met—he fears he has totally squandered his chances of having a prom he’ll never forget. Deacon couldn’t be more wrong. About everything. 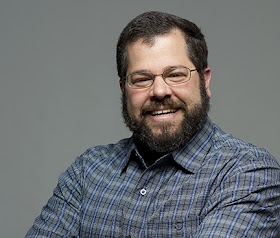 Brian Katcher was born in St. Louis, Missouri, in 1975. He attended the University of Missouri, Columbia, before dropping out of society and bumming around Mexico for three years. He’s worked as a fry cook, a market researcher, a welding machine operator, a telemarketer (only lasted one day), and a furniture mover. He lived on an Israeli military base one summer, and once smuggled food into Cuba. When he’s not writing, he works as a school librarian. He lives in central Missouri with his wife and daughter.  He still hasn’t paid the parking ticket he got in West Virginia in 1997.

Have you had a chance to read DEACON LOCKE WENT TO PROM yet? What is the best or most extravagant promposal you have seen or heard about? Have you tried to make your character into something they shouldn't be? How did you solve the problem? Are you excited to see Brian Katcher's next book with four separate point of views? Share your thoughts about the interview in the comments!