WOW: Treating your path to publication like it's your MFA

Today on WOW, we're delighted to welcome Jennifer Brown, author of the Shade Me trilogy and most recently of DARE YOU (more about that below). Jennifer offers a great perspective on how to keep going on the sometimes long and difficult path to publication. She learned to treat the process like higher education, which helped her learn from rejection instead of being defeated by it. Here's more from Jennifer–and stay tuned to the end to learn more about her book!

Treating your path to publication like it's your MFA by Jennifer Brown
Usually when I’m asked about the best piece of advice I received on my road to publication, I say it’s, “Begin on the day that is different.” Which is truly great advice (I just wish I could remember who said it). Knowing where to start a story is important in engaging your reader, and it’s also an excellent way to identify your conflict right off the bat.

But it’s not really the most important piece of advice I received.

The best piece of advice I received came from my husband, and it went something like this: “This is your graduate education, and you should be glad you’re not paying for it.”

You see, my road to publication was long. Dude, it was LOOONG. It was nine years from my decision to make a run at this gig to actually seeing something I wrote on a bookshelf. And mine isn't one of those stories where it took me eight years to write my first novel and a grueling year of submitting before it got accepted. No, it was eight years of writing five novels, two of which were unsuccessful in finding an agent; four of which were unsuccessful in finding a publisher. There was a lot of rejection. A ton of rejection. A mountain of rejection. Or at least it felt that way.

And I wasn’t just writing and submitting (and getting rejections on) novels. When I threw myself into the business, I threw myself hardcore into the business. I was writing essays and short stories and articles and blogs and poetry—pretty much anything that might get me a byline. And those were getting rejected, too. Not all of them. Just enough of them to be seriously frustrating and make me doubt that I would ever find real success with this whole insane Becoming a Writer idea of mine.

So I whined. I “gave up.” I griped. I seethed. I pontificated on the unrealistic and unfair set-up of the whole system. I whined some more. “This isn’t worth it,” I remember saying one particularly exasperating night. “At what other job in the world do you work for years and get no pay and are expected to just keep working anyway?”

Most importantly, like grad school, if you stuck it out, jumped through all the hoops, took all the tests, thanked all the teachers for their wisdom, and learned from your mistakes…you would come out with a specialized skill set that would prepare you for the job. Something along the lines of a Doctorate* of Hanging in There from the University of Thank You, Sir, May I Have Another.

As much as I hate to admit it when he’s right, especially when it comes down to shutting down my pity parties, that shift of focus was exactly what I needed in order to keep me engaging in the pursuit of publication. I was even able to change my thinking in a way that made me grateful that my “graduate education” was tuition-free! Grateful for being rejected; can you imagine?

But he was right. Getting published is often a numbers game, and the equation is very simple (even for non-math people like me). It goes like this:

So I try to this day to consider that “+ 1” to be just another class in my grad school requirement. Pass that class, and I am one step more knowledgeable in my field. My chances of career success are one step higher, and are a whole lot of steps closer than those who gave up during their “first semester.”

What’s funny is, “Begin on the day that is different” kind of goes along with this whole “continuing education” theory, the two pieces of advice working in tandem. Because the day my paradigm shifted, and I began to look at my rejections as education rather than obstruction—the day that was decidedly different—was the day I really did begin.

*Or Bachelor, or Master, or GED, or Vocational Certificate—whatever works for you! 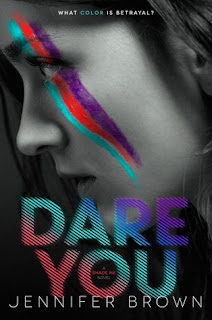 About DARE YOU
In the second book of the suspenseful Shade Me trilogy, Nikki Kill becomes embroiled in another mystery where only her synesthesia can help her unravel the dark truth.

Nikki Kill didn’t realize that trying to find out who killed Peyton Hollis would tangle her in a web of dangerous family secrets that would rock her identity to the core. But now that Nikki knows the truth, the all-powerful Hollises want to frame her for Peyton’s murder.

And now Nikki’s only chance at escaping the cold black bars of prison or the crimson grip of death is teaming up with the enigmatic Detective Martinez and relying on an ever-shifting kaleidoscope of clues....
Amazon | B&N | Goodreads 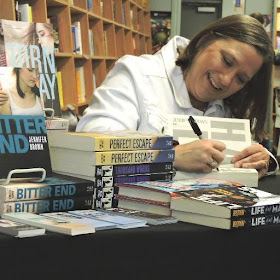