Author L.E. DeLano joins us today for a unique and interesting craft post on using techniques from the theater to write better emotion. Be sure to check out her new release, Traveler, at the end!

How My “Useless” Theatre Degree Made Me A Better Writer

When I was in college studying Theatre, I had a terrific acting professor.

Every so often in rehearsals, just to shake things up, he’d make us play a scene without the dialogue. It helped us more accurately get a handle on the emotional “beats” in the scene. For instance, a scene with dialogue might read something like this:

John: What are you holding there?

Mary: It’s a letter. From your mother.

John: Why is she writing me after all this time?

Mary: Your father’s dead. He’s being cremated, and the memorial service is Tuesday.

The actor in me realizes there are a lot of ways to play that scene. And sometimes, breaking it down to just the emotions and leaving out the words gives you a chance to take that character’s story in a different direction than the same-old, same-old. It can let you layer and build and tear down and explore.

You could take out the words, and have a scene like this:

Mary: In a hurry to get it out and afraid of his reaction

Mary: Finding it hard to get the words out

John: Stunned – needs to escape to deal with his grief (Exits)

I still use the get-rid-of-the-words trick when I’m writing sometimes. It helps a lot with the old “Show, don’t tell” thing. I was writing a death scene the other day, and it seemed like I was an outsider, standing there describing how very sad this guy was, when there were a dozen ways to show how deeply he was grieving. His head laid on a still chest, the tightness in his throat, his fists clenched in impotent rage…

Once I took out the dialogue and made him act the scene, I found it a lot easier to put that dialogue back in and suddenly, I’ve got a grieving, angry man who’s all action.

Another helpful exercise comes courtesy of a visiting instructor we hosted once, who facilitated an entire workshop on mask play.

It was really fascinating because he used various masks – neutral, masks of agony, happiness, etc. and had us play various scenes wearing these masks. It was a good exercise for us to act beyond the mask (or in spite of it) and use our entire bodies, not just our faces. It was also a great exercise in listening, because the other actor in the scene was behind a happy face or a sad face or a neutral face and we had to really listen for tone and inferences and watch the actor’s body language.

Stripping that mask away – or slamming it firmly into place – can really add tension or insight or maybe even both. It’s a good writing exercise, even if the mask is made of words instead of papier mâché.

Just a couple of little tips that work for me, courtesy of that “useless” Theatre degree that my parents assured me would end up being a waste of time and money. Now I’m signing copies of my book to go out to their friends. Go figure.

Writing is life, and Theatre, at its core, is the observation of and commentary on that life. You have to live it – in your head, or in your living room – before you can put it down on paper. Stick your characters center stage, build the set around them, and above all, remember that it’s your show. You decide where that spotlight shines. 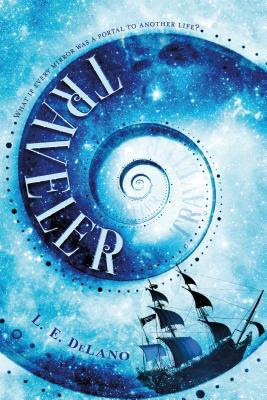 Jessa has spent her life dreaming of other worlds and writing down stories more interesting than her own, until the day her favorite character, Finn, suddenly shows up and invites her out for coffee. After the requisite nervous breakdown, Jessa learns that she and Finn are Travelers, born with the ability to slide through reflections and dreams into alternate realities. But it’s not all steampunk pirates and fantasy lifestyles: Jessa is dying over and over again, in every reality, and Finn is determined that this time, he’s going to stop it.

This Jessa is going to live.

L.E. DeLano is a blogger and autism advocate under her alternate moniker, Ellie DeLano. She comes equipped with a "useless" Theatre degree that has opened doors for her in numerous ways. Though mostly raised in New Mexico, she now calls Pennsylvania home. When she's not writing, which is almost never, she's binge-watching Netflix and trying her best not to be an unwitting pawn in her cat's quest for world domination. Traveler is her debut novel.