Sophie Jordan, author of RISE OF FIRE, on her deepest, darkest fantasies

RISE OF FIRE is the sequel to Reign of Shadows, and we're excited to have Sophie Jordan here to chat with us. 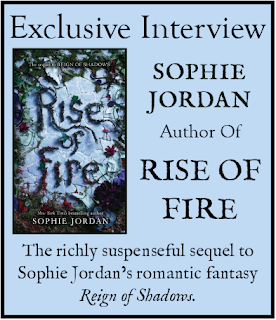 Sophie, what was your inspiration for writing RISE OF FIRE?

The idea for both REIGN OF SHADOWS and RISE OF FIRE is a result of my love for the following things: WALKING DEAD, TANGLED, the RIDDICK series and GAME OF THRONES. Yes. That's a lot of things seemingly unconnected except for my love of them. At first it seemed silly to consider them as inspiration for my next project until I asked myself "why not"? Why can't I take the elements that I loved in all of those things and create something uniquely my own? So that's what I did.

How long did you work on RISE OF FIRE?

Write to your ID. That essentially means to always channel and write to your deepest, most darkest core fantasies. You know when you were a kid or even a teenager and you used to daydream stuff? Write that kind of stuff. If you do that your writing will be visceral and more powerful and you will write like a speed-demon because you're addicted to your stories as much (hopefully) as your readers will be.

Right now I'm working on an adult contemporary romance (due in April). Following that, I will be starting my next young adult novel. 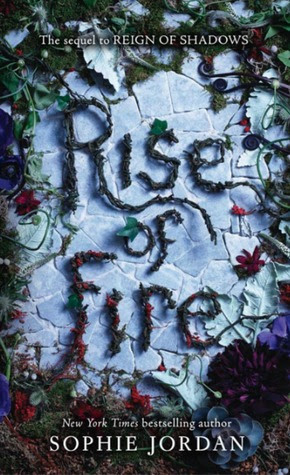 Luna and Fowler have escaped the kingdom of Relhok, but they haven’t escaped the darkness. When a battle against the dark dwellers mortally injures Fowler, Luna is faced with a choice: put their fate in the hands of mysterious strangers or risk losing Fowler forever.

Desperate to keep the one bright part of her life alive, Luna accepts the help of soldiers from a nearby kingdom. Lagonia’s castle offers reprieve from the dangerous outside world—until the king discovers both Fowler's and Luna’s true ties to Relhok and their influence over the throne.

Now pawns in each kingdom’s political game, Luna and Fowler are more determined than ever to escape and build the life they’ve been dreaming of. But their own pasts have a tight hold on their hearts and their destinies. Luna must embrace the darkness and fire within her before she loses not only Fowler, but the power she was destined to inherit.

Sophie Jordan grew up in the Texas hill country where she wove fantasies of dragons, warriors, and princesses. A former high school English teacher, she's also the New York Times and USA Today bestselling author of Avon historical romances. She now lives in Houston with her family. When she's not writing, she spends her time overloading on caffeine (lattes and Diet cherry Coke preferred), talking plotlines with anyone who will listen (including her kids), and cramming her DVR with true-crime and reality-TV shows. Sophie also writes paranormal romances under the name Sharie Kohler.

Have you had a chance to read RISE OF FIRE yet? Have you ever considered mixing a Disney story with the The Walking Dead or Game of Thrones? What are some of your favorite crossover ideas? What sort of things did you daydream of as a teenager? Share your thoughts about the interview in the comments!