Robin Talley, author of OUR OWN PRIVATE UNIVERSE, on writing the book she wanted as a teen

We're excited to have Robin Talley stop by to tell us more about her latest novel OUR OWN PRIVATE UNIVERSE. 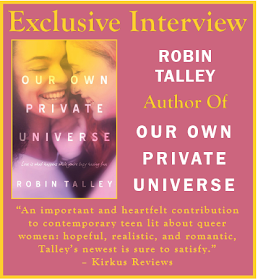 Robin, what was your inspiration for writing OUR OWN PRIVATE UNIVERSE?

It started with Judy Blume’s Forever… ― the classic coming-of-age novel from the 1970s about love and sex. When I was in middle school, my friends and I all passed that book around, hiding it in backpacks and lockers and discussing in whispers and giggles. When I was growing up, I always wanted to read a Judy Blume book about queer girls. So when I became a writer myself, I decided to try my hand at writing my own version of Forever. That was how OUR OWN PRIVATE UNIVERSE was born.

How long did you work on OUR OWN PRIVATE UNIVERSE?

I wrote the first draft as my Nanowrimo project in 2013. Then I revised it over and over again in between working on other projects. If you put it all back to back, I probably spent somewhere between a year and 18 months writing OUR OWN PRIVATE UNIVERSE.

I’m going back and forth between two projects right now. (Usually, I’ll write or revise a draft of one book, then put it aside while I write or revise the draft of another book, and then I’ll come back to the first one again with fresh eyes for a new round of revision). But only one of those two projects has been announced, so I’ll tell you about that one. It’s called PULP, and it’s about the phenomenon that was lesbian pulp fiction publishing in the 1950s ― when paperback publishers were putting out huge numbers of books about lesbians. They were considered “tawdry” reading due to the subject matter, but a lot of them were quite well-written. These books were marketed to straight men, and they were sold in bus stations and drugstores for 25 cents, with lurid covers featuring scantily clad women and printed on paper so cheap they’d fall apart after one reading. My book, PULP, is about an 18-year-old girl in 1955 who’s taking a huge risk by writing one of these books under a pseudonym, and an out-and-proud 17-year-old lesbian in the present day who finds her book and becomes obsessed with tracking down the woman behind the pseudonym. 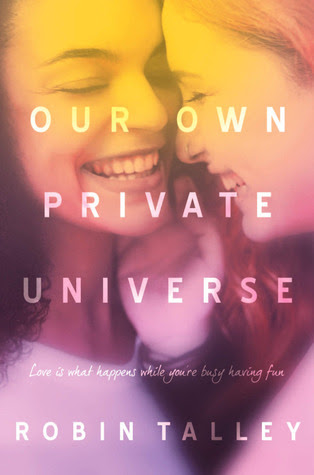 Fifteen-year-old Aki Hunter knows she’s bisexual, but up until now she's only dated guys—and her best friend, Lori, is the only person she’s out to. When she and Lori set off on a four-week youth-group mission trip in a small Mexican town, it never crosses Aki's mind that there might be anyone in the group she’d be interested in dating. But that all goes out the window when Aki meets Christa.

Robin Talley is the New York Times-bestselling author of four novels for teen readers: Our Own Private Universe, As I Descended, What We Left Behind, and Lies We Tell Ourselves. Her first book, Lies We Tell Ourselves, was the winner of the inaugural Amnesty CILIP Honour. Her work has been short-listed for the CILIP Carnegie Medal, the Lambda Literary Award, and the Concorde Book Award, and has been included on the American Library Association Rainbow List, the Amelia Bloomer Project List, and the Capitol Choices List. It has been nominated for the Kirkus Prize, the Young Adult Library Services Association Teens’ Top Ten, and the Goodreads Choice Awards, and has been selected for the Junior Library Guild. Robin was a Lambda Literary Foundation fellow, and has contributed short stories to the young adult anthologies A Tyranny of Petticoats: 15 Stories of Belles, Bank Robbers and Other Badass Girls, All Out, and Feral Youth.

Robin lives in Washington, D.C., with her wife, their daughter, and an antisocial cat. She enjoys reading about queer characters, analyzing Disney movies, and chocolate. You can find her at www.robintalley.com.

Have you had a chance to read OUR OWN PRIVATE UNIVERSE yet? Are you writing a book you wished you could have read as a teen? Do you go back and forth between projects? Share your thoughts about the interview in the comments!