Lance Rubin, author of DENTON LITTLE'S STILL NOT DEAD, on feeling grateful to be alive

We're so thrilled to have Lance Rubin talk about his second book in the Denton Little series, DENTON LITTLE'S STILL NOT DEAD. 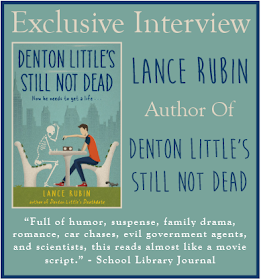 Lance, what book or books would most resonate with readers who love your book--or visa versa?

Can I just answer Harry Potter? You know that 98% of YA authors---including me---want to answer this question that way. Because Harry Potter is unbelievably good. But a real answer: Simon Vs. the Homo Sapiens Agenda by Becky Albertalli, Me and Earl and the Dying Girl by Jesse Andrews, and Gabi: A Girl in Pieces by Isabel Quintero all have a wonderfully funny, human vibe that I like to think Denton shares. Though that comparison isn’t 100% accurate, as Denton also has an action-adventure component, so I’ll also throw in Y:The Last Man by Brian K. Vaughan, Bryan Lee O’Malley’s Scott Pilgrim series, and---I’m gonna cheat and mention a TV show---Joss Whedon’s Buffy the Vampire Slayer. If you liked my first book and haven’t read/watched the books/series I just mentioned, you need to stop reading this blog and get on that.

It taught me that when you write the first book in a two-book series, maybe don’t just insert random sci-fi plot points without knowing exactly where they’re going and think, “Ah, I’ll figure that out when I write the second one,” because it’s possible that might result in lots of banging your head against a table when you do indeed start writing the second one.

What do you hope readers will take away from DENTON LITTLE'S STILL NOT DEAD?

That it’s their favorite book of all time, and they love it just as much as the first book, but maybe even a little more, but oh it’s so hard to decide because they’re both so delightful and great.

That was my joke answer. (No it wasn’t I was so serious.) Honestly, I hope readers have a genuinely fun time reading, with lots of laughs and surprises, but I hope they feel emotionally connected to Denton’s journey as well. And my biggest dream is that readers step away feeling at least a little bit more grateful to be alive than they did before they started reading.

Don’t let yourself be a perfectionist. Obviously do the best work you can, but, especially in the early drafts, just get it down on the page and trust in the ability of future versions of yourself to rewrite the stuff in there that sucks. Sure, every process has joyful “Aha!” moments, but most of the time it’s a struggle, and I think a big part of the writer’s job is to learn how to keep creating in spite of how uncomfortable that often feels.

I’m pushing toward finishing a first draft of my third book, which is a stand-alone YA speculative contemporary novel featuring a 15-year-old female protagonist. I say first draft, but I’ve been rewriting (and rewriting and rewriting) as I’ve gone along, so it’s more like a semi-third-draft. Anyway, I started it in fall 2014, so I’m excited about the idea of finally having a complete manuscript. Also, I just finished a draft of a Denton Little’s Deathdate screenplay, which has been challenging but fun. And lastly, Katie Schorr (my wife) and I are in the very early stages of writing a screenplay fueled by our anger at the current political climate. We’ve done more talking than writing so far, but we’re excited about it, and mentioning it here on the internet increases the likelihood that we’ll actually get it done. 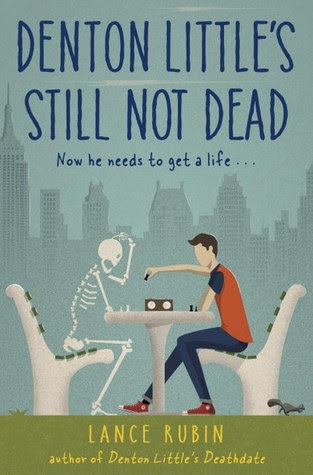 The good news: Denton Little has lived through his deathdate. Yay! The bad news: He’s being chased by the DIA (Death Investigation Agency), he can never see his family again, and he may now die any time. Huh. Cheating death isn’t quite as awesome as Denton would have thought…

Lance Rubin’s debut novel, Denton Little’s Deathdate, showed readers just how funny and poignant imminent death could be. Now in this sequel, he takes on the big questions about life. How do we cope, knowing we could die at any time? Would you save someone from dying even if they were a horrible person? Is it wrong to kiss the girl your best friend is crushing on if she’s really into you instead? What if she’s wearing bacon lip gloss?

Lance Rubin is the author of Denton Little’s Deathdate. He’s worked as an actor and written sketch comedy, including successful runs of The Lance and Ray Show at the Upright Citizens Brigade Theatre in New York City. He’s also co-written a new musical called Broadway Bounty Hunter. Lance lives in Brooklyn with his wife and son. He is very glad he doesn’t know his deathdate. You can follow him online at LanceRubin.com and on Twitter @LanceRubinParty.

Have you had a chance to read DENTON LITTLE'S STILL NOT DEAD? Have you been writing and didn't think through a plot point? What did you do to work through it? Would you be excited to see a screenplay for Denton Little? Has this book made you feel grateful to be alive? Share your thoughts about the interview in the comments!