Kimberley Griffiths Little, Author of RETURNED, on Being Forced into Learning Patience

I'm so excited to be able to share this interview with y'all and to be able to welcome Kimberley Griffith Little's third book in the Forbidden series into the world. Kimberley and I started the journey of our trilogies together, quite literally, by sharing a launch tour and hotel rooms, and long drives with hectic schedules. We also had a ton of fun along the way.

I've been dying for this final book in her fabulous, sumptuous series to hit the shelves. And now, if you haven't already read the first two, hurry up and get them. Still not convinced? Read on! : ) 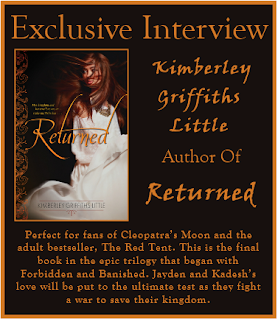 Kimberley, what was your inspiration for writing RETURNED?

I’ve always been fascinated by ancient Mesopotamia, the legends of Arabian horses, and ancient Egypt. When I signed up to take belly dance classes (a long-time secret dream) and even performed(!) I started researching the roots of belly dance, including the temple prostitution of the Temples of Ashtoreth that were located in every major ancient city.


A story began to play out in my mind of a tribal girl living a life of hardship in the desert who runs away to the luxury of temple life where the priestesses perform the Sacred Marriage Rite, but always have plentiful food, silk dresses, and baths.

One research book led to another and the story took off, including a trip to the Middle East, the ancient world wonder of Petra, and the Frankincense Trail. The trilogy has a long publishing history as well. Two agents, two publishers, multiple delays, etc. The first draft began in 2003 and the 3rd and final book is now published in 2017 – talk about being forced into learning patience, whew!

Honestly, the entire book was the hardest project I’ve ever written in just about every way—and that’s after publishing ten novels.

There were so many pieces and threads to pull together and a huge war with four armies to figure out. I kept psyching myself out when I’d sit down to write because it was so overwhelming. I threw away Chapter One over and over again. When I lost half of my outlining cards on an airplane, I almost admitted myself to a hospital!

But the hardest thing was the final, climactic war chapters. My editor told me I had TWO big climax scenes and I needed to pick one and delete the other. But—but—I loved them both and I’d worked SO HARD on them! The last 50-75 pages was so interwoven that it took a lot of untangling to take out one of the climax scenes and re-sew it all back together. By the time I was done, I’d gained five pounds and chewed off all my fingernails—strung out on Dr. Pepper!

After a lot of agonizing I ended up going with the scene that’s more of a big epic movie-like war scene. It’s pretty wild—a brutal camel stampede—but fits completely with the setting, the time period, and my research. When I told my editor which climactic scene I’d chosen, she said, “Perfect. I agree. I was hoping that was the one you’d choose.” Score me!

I’ve always worked at home, moving my desk around the house from kitchen to sunroom, to bedroom as my family grew. 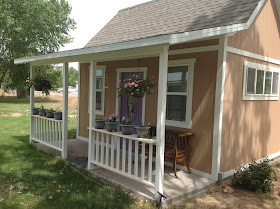 A few years ago, my brother built me a writing cottage in the backyard (we live on an acre) and it’s been a lifesaver with so many deadlines and writing projects; not only this trilogy but the middle-grade novels I write for Scholastic and the adult romance I write under Kimberley Montpetit.

When I was banging my head out over the first draft of Banished, I started listening to big cinematic orchestral music on Pandora through my iPad. It helped enormously. After awhile, I was like Pavlov’s dog. When the music began and I put on my speakers or headphones, I started panting—I mean writing!

There are so many things, but perhaps I can boil it down to:

1. Never stop learning your craft
2. Write from your heart
3. Get honest feedback from people you trust
4. Never, ever give up.

I can pretty much guarantee that if you do these things, your odds of getting publishing will go up a hundred times! 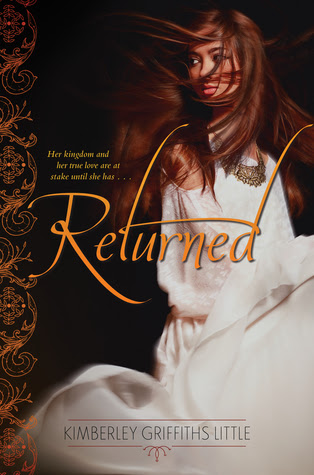 After tragedy strikes on the day they were to wed, Jayden must support Kadesh as he ascends the throne and becomes king of Sariba. But with the dark priestess Aliyah conspiring to control the crown, and the arrival of Horeb, Jayden’s former betrothed, Kadesh’s kingdom, as well as his status as king, is at stake.

Jayden knows that the time to be merciful has come and gone, and that some enemies can only be halted by death. Now she and Kadesh must prepare to fight not only for their love, but also for their kingdom.

Kimberley Griffiths Little was born in San Francisco, but now lives in New Mexico with her husband and their three sons.

For such award-winning middle grade novels as When the Butterflies Came, The Last Snake Runner, The Healing Spell, and Circle of Secrets, her writing has been praised as "fast-paced and dramatic," with "characters painted in memorable detail" and "beautifully realized settings."

She's stayed in the haunted tower room at Borthwick Castle in Scotland; sailed on the Seine in Paris; ridden a camel in Petra, Jordan; shopped the Grand Bazaar in Istanbul; and spent the night in an old Communist hotel in Bulgaria.

Have you had a chance to read RETURNED yet? Has working on a novel caused you to gain weight and chew off fingernails? Would you love a cute writing cottage in your backyard? Share your thoughts about the interview in the comments!