Developing a Writing Process: Nic Stone and I Only Eat Raspberries

I was checking out Nic Stone’s website the other day and saw that not only does she have a very succinct explanation of her writing process, but also has a mnemonic device to describe it.

Kelly deVos: So, starting with “I” for Inspiration, what inspired DEAR MARTIN?
Nic Stone: A combination of three things: the shooting deaths of unarmed teens (specifically Trayvon Martin, Jordan Davis, and Mike Brown), the rise of Black Lives Matter, and the negative responses in the media that often cited MLK as someone who would be against the protests. Something about that last part just felt off to me, so I thought to myself How WOULD Dr. King’s teachings hold up here in 2016 in light of everything going on?

KD: The next step is Organization and I was especially interested in this since your book combines a main narrative – the story of your main character, Justyce McAllister – with the letters he writes to Dr. Martin Luther King Jr. What kind of research was needed and how did you outline/organize these elements while drafting?
NS: Most of my research involved combing through Dr. King’s teachings/sermons/speeches/essays/books and really examining not only the events of the Civil Rights Movement, but how society at large responded. It often wasn’t pretty (just like today). I also spent some time talking to young black men about their experiences and how they deal with things like racial profiling. Originally, the book was nonlinear, so the outline was very complex, but in the final version, the letters happen in response to things that take place within the narrative, so the organization was fairly straightforward. Event —> Response; Next event —> Next response and so on.

KD: Next up, is Execution, which is fairly self-explanatory. But how long did your drafting process take? What did you find most challenging while writing?
NS: HA! So fun story: DEAR MARTIN sold on proposal. And then I had eight weeks to write a draft. I think I did the initial draft in 6 weeks. The hardest thing was that because of the time crunch, I had to do the research and drafting simultaneously. Which was very awkward and uncomfortable because it meant I spent a good chunk of the execution phase crying (it was all a little intense).

KD: Finally, there’s Revision, which is a step many writers truly dread. Any tips or tricks to help manage revisions or make them less painful? How much did your final version change from your first draft?
NS: Whew. I really don’t like revisions. If anyone has any tips for ME, please let me know, lol! I tend to just grit my teeth and plow through them. I do print a paper copy and edit with a pencil. That helps me stay focused and makes it easier for some reason.

With DEAR MARTIN, the final book is night and day from the initial draft. Draft two (the one that went in to the editor after agent notes) was 79,000 words, eight points of view, and nonlinear. The final is 40,000 words, one point of view, and linear. But oddly enough: it’s the same book. Just boiled way down (and infinitely better, believe me).

KD: Last question. You sold DEAR MARTIN in a 2-book deal. Is your next project a related story or something completely different?
NS: So different, I’m terrified, lol.

KD: BONUS Question> You’re one of the few debut writers I know who sold your debut book on proposal. Did that increase the pressure on you during writing? Or make you more confident since you’d already sold the book?


NS: Listen: selling on proposal is a real crap shoot. Because this is the thing: if your editor doesn’t like your initial execution (i.e. mine was like “This isn’t what I bought. I can’t publish this.”) you’ll have to rewrite it. Truthfully, during the writing, the only pressure I felt was getting it in on time. But I will say from the experience: I probably won’t sell on proposal again. I want my editor to have a FULL scope of what she’s getting before she buys something from me. Yes, cutting 39,000 words/140 pages was great with regard to making me a better writer, but if I can avoid that kind of gutting again, ya know: I will. 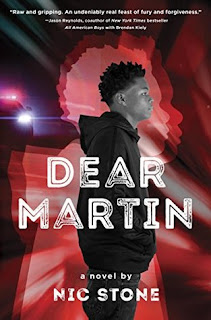 About DEAR MARTIN
Justyce McAllister is top of his class, captain of the debate team, and set for the Ivy League next year—but none of that matters to the police officer who just put him in handcuffs. He is eventually released without charges (or an apology), but the incident has Justyce spooked. Despite leaving his rough neighborhood, he can’t seem to escape the scorn of his former peers or the attitude of his prep school classmates. The only exception: Sarah Jane, Justyce’s gorgeous—and white—debate partner he wishes he didn’t have a thing for.
Struggling to cope with it all, Justyce starts a journal to Dr. Martin Luther King Jr. But do Dr. King’s teachings hold up in the modern world? Justyce isn’t so sure.Then comes the day Justyce goes driving with his best friend, Manny, windows rolled down, music turned up. Way up. Much to the fury of the white off-duty cop beside them. Words fly. Shots are fired. And Justyce and Manny get caught in the crosshairs. In that media fallout, it’s Justyce who is under attack. The truth of what happened that night—some would kill to know. Justyce is dying to forget.
Goodreads | Amazon | B&N 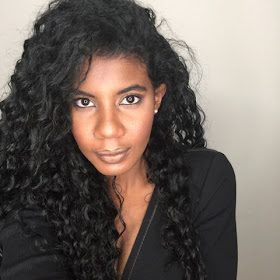 About Nic Stone
Nic Stone was born and raised in a suburb of Atlanta, GA, and the only thing she loves more than an adventure is a good story about one. After graduating from Spelman College, she worked extensively in teen mentoring and lived in Israel for a few years before returning to the US to write full-time. Growing up with a wide range of cultures, religions, and backgrounds, Stone strives to bring these diverse voices and stories to her work.Stone lives in Atlanta with her husband and two sons.
Website | Twitter | Instagram