Chris Miles, author of SPURT, on harvesting the organs of earlier works

We're delighted to have Chris Miles join us to chat about his latest novel SPURT. 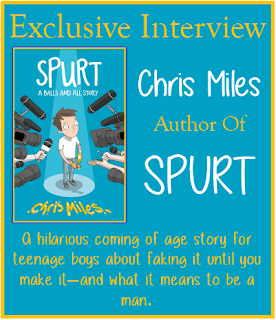 Chris, what was your inspiration for writing SPURT?

Spurt came about because I realised I’d been holding back from writing anything drawn directly from my personal experience. I’d been pitching weird sci-fi ideas to my editor, but she suggested I try to write something funny, real-world and contemporary.

At first I was aghast. I didn’t think it was something I could do. But I quickly came around. Like Jack in Spurt, I was a ‘late bloomer’, and it seemed that the idea of a kid trying to fit in by ‘faking puberty’ had a lot of comedic potential. As soon as I hit on that idea, I could see the cringes coming a mile away, and it became irresistible.

For several drafts, Jack’s dad was simply ‘not around’. My own dad had died several years before I started writing Spurt, and I think I was resisting using that part of my personal experience. Ultimately, with some gentle editorial prodding, I made the decision that, yes, Jack’s dad had died and wasn’t just ‘AWOL’, and that it was something we needed to address head-on in the book. There is a scene where Jack is put on the spot to emotionally confront this reality, which reflected my own confusion and denial, I think. That was difficult.

One of the scenes I’m proudest of is a telephone conversation that happens between Jack and his mum, about a third of the way into the book. I won’t spoil it here, but due to a fundamental misunderstanding by both participants in the conversation, it’s a seriously awkward conversation. It’s a classic comedic device, the misunderstanding — and like I said before, I really wanted to make Spurt a ‘proper’ comedy rather than a book that is sometimes ‘funny’. I employed some trade secret comedy techniques in devising that scene, and for me it’s one of the highlights of the book.

What book or books would most resonate with readers who love your book–or visa versa?

Readers who enjoy Spurt would probably enjoy the Adrian Mole books by the late British author Sue Townsend. I read them growing up, and while most of it went over my head back then, the mix of clueless innocence and equally clueless smuttiness is very much what I had in mind while writing Spurt.

How long did you work on SPURT?

I spent a year developing the idea for Spurt with my editor — writing and rewriting the initial chapters and honing the concept — before my Australian publisher officially contracted the book. After that I spent about a year and a half on two or three major structural redrafts before the book was published, with completely different endings and a few characters and subplots disappearing entirely.

Writing Spurt taught me that I have a tendency to overcomplicate my plots, though I think that’s a necessary evil when writing anything as indebted to farce or situation comedy as Spurt is. I think that’s my natural inclination; it just means I have to remind myself not to get too attached to anything, because if I have to make changes to a heavily engineered plot in order to make the story more emotionally satisfying, I need to undo and unpick a lot of work.

I’ve been writing since I was a teenager (I’m now more than two decades older than any of the ages that end in ‘-teen’), so it’s certainly been a long road. But it’s a road that got easier once I became more involved in the writing community. In my mid-twenties I enrolled in a postgraduate writing program. Through that program I formed relationships that have since created opportunities for me, and it helped me understand more about the publishing world (I’d been pretty naive and isolated from other writers before that).

Spurt is my sixth published book, but my first ‘proper’ novel under my own name. I have one earlier ‘completed’ children’s novel that remains unpublished, and half a dozen other abandoned novels in various stages of completion. I’ll probably harvest the organs of those earlier works at some point and put them in a new body.

In terms of Spurt specifically, one of the keys to understanding what I was writing was realising that as well as trying to ‘fake puberty’, Jack is really trying to ‘be a man’.  I’ve come to realise that I rely heavily on theme to help me make decisions about everything from the overall shape of the story to the smallest incidental details. Having a grasp on those thematic elements is always the key to my being able to craft a story in a way that makes sense to me.

I have terrible impostor syndrome, and find it very difficult to publicly embody the ideal of being ‘an author’, so there’s no way I can work in a coffee shop. I feel too conspicuous and awkward. Most of my writing happens on an ugly sofabed in my study, on pen and paper, between 5.30am and 7am (before I have to get my daughter to school, walk the dog, and go to work). It’s a good time of day for me, because my inner critic isn’t awake yet, and I’m more creatively free. I’m also less likely to get distracted by the internet, or sweets.

I plan out scenes and do first drafts of dialogue on paper for a similar reason — it feels freer than writing direct onto the screen, which feels more final, as though it needs to be perfect first go. I do transfer the work to the computer pretty quickly (my handwriting is shocking, and the sooner I transcribe it the more chance I’ll have of deciphering it), but for the initial creative heavy lifting I prefer to work on paper.

Try to enjoy the process, and try not to fixate on a goal or end point, or other external measures of ‘success’. That is so much easier said than done (speaking from experience here), but you’ll be miserable otherwise. Self-doubt is just the most horrible, unproductive thing for a writer, and it usually comes from comparing ourselves to others. It’s human nature, but it’s death for your art.

Follow your curiosity and intuition as much as possible, and then, if what you want to do is publish, do everything you can to solicit and consider the advice of those who know more about the field than you do. If you’ve listened to your heart from the outset, you’ll be better placed to listen to other opinions once the work is more fully formed. It’s easier to be open-minded about making changes if you understand the essence of your story and how you personally connect with it.

I’m working on another realistic, contemporary comedy — firmly middle grade this time — with a bit of a sci-fi twist. 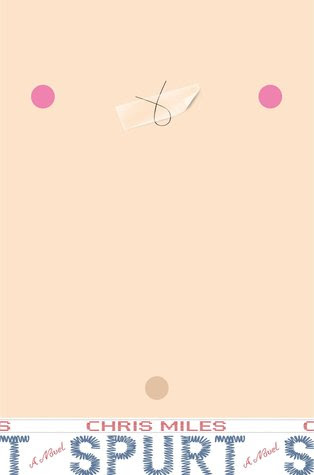 A boy who’s the last in his class to go through puberty tries to fake it till he makes it through a series of cringe-worthy and hilarious events in this balls-and-all coming-of-age novel that’s Judy Blume for boys!

Worse yet, he hasn’t heard from his friends all winter vacation. He assumes they’ve finally dumped him and his child-like body—except then he finds out that it’s much worse than that. His friends are now so far ahead of him that they’ve started dating and getting girlfriends. Jack is out of luck. But then he comes up with a plan to catch up and win his friends back. And his plan is perfect: he just has to fake puberty.

Chris Miles is the author of several books for children, including two books in the best-selling Zac Power series, and the Children’s Book Council of Australia Notable Books Who’s on the Money? and Stuck on History. In his spare time he indulges his love of Doctor Who, LEGO®, Dungeons & Dragons and anchovies. He is a dog person*.

Have you had a chance to read SPURT yet? Does having a grasp on thematic elements help you craft a story that makes sense? Do you follow your curiosity and intuition as much as possible? Share your thoughts about the interview in the comments!