Catherine Alene, author of THE SKY BETWEEN YOU AND ME, on how an ending can turn out to be the beginning

We're pleased to have Catherine Alene stop by and share some insight into her debut novel THE SKY BETWEEN YOU AND ME. 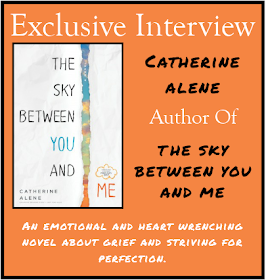 Catherine, how long did you work on THE SKY BETWEEN YOU AND ME?

In the time it took me to write and then find a home for this book I lived in four different cities, had nine different addresses, earned two Master’s degrees and became a mother. Though I didn’t work on this book consistently, a total of ten years passed between the day I scribbled Raesha’s first words on a napkin in a dining hall in Vermont to the day on which I finally sold this novel.

I learned that endings never look like you think they will. If you let them, an ending can turn out to be the beginning of another chapter.

What do you hope readers will take away from THE SKY BETWEEN YOU AND ME?

I hope that readers never feel as though they are reading a book about an eating disorder. Instead, I’d like them to experience the story of a complex and beautiful girl who happens to be struggling with anorexia. Raesha is much more than the disease threatening to destroy her life and I hope readers are as captivated by her as I am.

My a-ha moment came when my agent, Sara Scuito, looked at a manuscript I thought was complete and informed me that I had yet to finish the story. I looked back through the piece and realized she was correct. I had stopped writing just before things became truly complex for Raesha. I had ended the story on the edge of a cliff because I was afraid of what I’d discover to be true not only about her life, but about mine as well.

Every night I read a stack of picture books to my daughter and then fall asleep next to her for about half an hour. I then wake up, make a cup of mint tea and turn on my computer. The next four hours are spent writing. No internet. No music. No phone conversations. Just me and the words on the page.

In the words of Ned’s Atomic Dustbin, kill your television. Put your phone away. Disconnect from the internet. Interact with people face-to-face whenever possible. Listen to their stories and allow yourself to be changed by them. 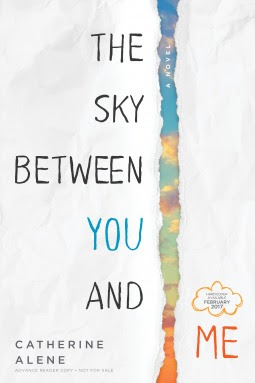 Raesha will do whatever it takes to win Nationals. For her, competing isn't just about the speed of her horse or the thrill of the win. It's about honoring her mother's memory and holding on to a dream they once shared.

For an athlete, every second counts. Raesha knows minus five on the scale will let her sit deeper in the saddle, make her horse lighter on her feet. And lighter, leaner, faster gives her the edge she needs over the new girl on the team, a girl who keeps flirting with Raesha's boyfriend and making plans with her best friend.

So Raesha focuses on minus five. But if she isn't careful, she will lose more than just the people she loves. She will lose herself to Lighter. Leaner. Faster.

Catherine Alene has an MA in teaching, and earned her MFA in writing at Vermont College of Fine Arts. Like the protagonist in The Sky Between You and Me, Catherine battled anorexia nervosa. Now in recovery, she is actively involved with the National Eating Disorders Association (NEDA) and regularly serves as a recovery speaker, talking to college students and professional groups about her experience living with, and finally recovering from, the disease. Catherine teaches language arts at an alternative high school in central Oregon, where she currently lives with her daughter, horse, cat, and black lab, Herman.

Have you had a chance to read THE SKY BETWEEN YOU AND ME yet? Have you been afraid of taking the next step in your story? What made you realize that you needed to keep going?  Share your thoughts about the interview in the comments!