Brenda Drake, Author of GUARDIAN OF SECRETS, on Wanting Her Readers To Ugly Cry

It's a FABULOUS day in the publishing world. So many great books to add to our TBRs. Can you hear the stacks groaning? Well, find room at the top somewhere for GUARDIAN OF SECRETS. It's the second book in Brenda Drake's Library Jumpers series, and I was thrilled to officially get to say nice thins about the first book when it came out. Yes, that's an official endorsement. Brenda's world is so unique, so fun, so surprising, and her romance will heat up the room. Read on for our exclusive interview with Brenda below!

Brenda, what scene was really hard for you to write and why, and is that the one of which you are most proud? Or is there another scene you particularly love? 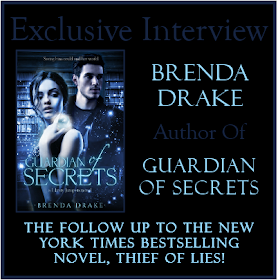 The hardest scene for me to write was the final battle in this book. I can’t say why because it’ll spoil something for the readers. But I ugly cried while writing it. I was so depressed afterward. I hope I get the same reaction from the readers. Ha! There is a scene between Gia and Bastien that I really love. But, again, if I say too much about it, I’ll spoil it. In that scene, we really get a sense of who Bastien is and how he feels about Gia and the sacrifices he’d make to save her.

What do you hope readers will take away from GUARDIAN OF SECRETS?

I’d hope the readers would take away a love for the characters and a curiosity of where book three will take them. Also, a desire to visit as many libraries as they can. There are tons of beautiful libraries in the world that house rare books, artworks, and history within their walls. Books are magical ways to explore new places, meet new characters, and learn new things. And all you need is a library card!

GUARDIAN OF SECRETS isn’t the first book I’ve written. I have three before it that are published and a half dozen that will never see the light of day. It has been a long journey to publication. Full of mistakes that took me off the path and on detours before bringing me back to the right road. I started writing this series in 2009. It’s seen me through changing agents and publishers. There were heartbreaking moments and many wonderful ones. I have to say, my publishing journey is what it was supposed to be. It’s what molded me into who I am today. And I couldn’t be more thankful.

I have to wake up, which takes a few hours, so I get fueled on coffee. I answer emails, DMs, and do contest things or marketing stuff. When my brain is functioning at full speed, I jump into writing until lunch. I’ll eat something, run errands, and do other tasks. Then I’ll write again until dinner. If my family doesn’t have anything going on or something we want to watch together, I’ll write again until bedtime. I pretty much write whenever I don’t have something else to do. I have to have noise, so I do play music while I’m writing. I usually write at home, but when I feel depressed, I’ll go to a coffee shop, the library, or our neighborhood Barnes and Noble and write there for a few hours. I have a writing partner, Pintip Dunn. We call each other and push each other to stay on task. It really helps to be accountable to someone. It’s a challenge to stay focused, but worth it when you can type “the end.”

Learn your trade. The best way to do that is to read. Never give up. Rejections can hurt, but don’t get discourage. Instead, learn from them. Keep writing and querying new stories until the right one clicks with agents and/or publishers. And learn patience—you’ll need it. Publishing is excruciatingly slow at times.

I’m currently working on ASSASSIN OF TRUTHS, book three in the Library Jumpers series. It’s difficult to write the ending to this series. My heart is breaking. I love it! This book is intense, and I hope it delivers that final blow with a dash of happily ever after that leaves readers satisfied and wanting more. Because I so don’t want to leave Gia, Arik, Bastien, Nick, and all the others. They’ve become so dear to me. 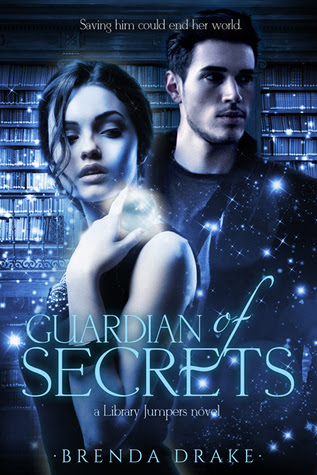 Being a Sentinel isn’t all fairytales and secret gardens.

Sure, jumping through books into the world’s most beautiful libraries to protect humans from mystical creatures is awesome. No one knows that better than Gia Kearns, but she could do without the part where people are always trying to kill her. Oh, and the fact that Pop and her had to move away from her friends and life as she knew it.

And if that isn’t enough, her boyfriend, Arik, is acting strangely. Like, maybe she should be calling him “ex,” since he’s so into another girl. But she doesn’t have time to be mad or even jealous, because someone has to save the world from the upcoming apocalypse, and it looks like that’s going to be Gia.

Maybe. If she survives.

Brenda Drake grew up the youngest of three children, an Air Force brat, and the continual new kid at school. Her fondest memories growing up is of her eccentric, Irish grandmother's animated tales, which gave her a strong love for storytelling. With kids of all ages populating Brenda's world, it was only fitting that she would choose to write stories with a bend toward the fantastical for both younger readers and the young at heart. And because she married her prince charming, there's always a romance warming the pages. Her favorite books are The Secret Garden by Frances Hodgson Burnett, The Lion, the Witch and the Wardrobe by C.S. Lewis, Kings Row by Henry Bellamann, and Anna and the French Kiss by Stephanie Perkins. When she's not writing, she hosts workshops and contests for writers such as Pitch Wars and Pitch Madness on her blog, and holds Twitter pitch parties on the hashtag, #PitMad. In her free time, Brenda enjoys hanging out with her family, haunting libraries, bookstores, and coffee shops, or just reading someplace quiet and not at all exotic (much to her disappointment).

Have you had a chance to read GUARDIAN OF SECRETS yet? Do you have a writing partner who helps keep you accountable? Are you learning you trade by reading? Share your thoughts about the interview in the comments!