Arwen Elys Dayton, author of DISRUPTOR, on what to do after jumping off a cliff

We are thrilled to have Arwen Elys Dayton join us to share more about DISRUPTOR, the second book in the Seeker series. 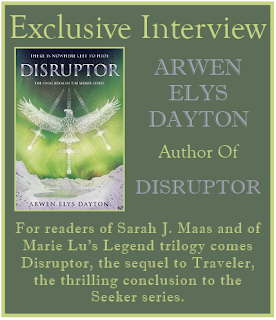 Arwen, was there an AHA! moment along your road to publication where something suddenly sank in and you felt you had the key to writing a novel? What was it?

I’m not sure there IS a key to writing a novel other than this: jump off the cliff before you can stop yourself.

That’s how you get started—or at least how I get started. I just jump. I start writing.

And then the second half is: keep going until the end. In this metaphor, you are falling off a cliff, so it should be easy to keep going until the end! ;) Actually, once you’ve jumped off the cliff, the rest of the process can feel more like climbing up than falling down. At that point, if you continue to put one foot in front of the next, if you continue to create and discover your story bit by bit, one bright, shiny morning or one late, coffee-fueled night or one bleary, hectic afternoon, your novel will be finished. Isn’t that amazing? It will be finished.

That combination of jump off the cliff/keep going till the end works for me during other parts of the process too. Editing a first draft can sometimes be worse than staring at a blank page, but if I jump…then it’s already happening and there’s nothing to do but keep going.

A new book series, with mystery! And also a book of short stories that share a common theme about humans (specifically young people) physically modifying themselves, sometimes for the better, sometimes not, and reinventing what it means to be a human being.

The main ritual is to sacrifice my phone—I have to hide it and turn off the Internet if I want to get anything done. It turns out that, if I can be in a room of any kind (at my house, at a coffee shop, in the passenger seat of a parked car, wherever) without Internet for a period of time, I can write! This phone discipline is especially important at the beginning of a new book, or after any sort of long break, because I have trouble getting started and you know what’s amazing when you’re having trouble with anything? Looking at Facebook and cat memes! They are so amazing, so enticing, such a wonderful way to feel like you’re doing something when really you’re not. I often think browsing the Internet is the modern equivalent of smoking a cigarette. It’s something that wastes time and feels good (I mean, I don’t smoke, but I assume it must feel good to the people who do it, or why would they do it?) and when you’re done you feel slightly dirty. So if I can kill the Internet, I can write.

Once a story is in progress and rolling along, it’s much easier for me to keep the work going. When a book is well underway I usually do a 4-6-hour block of writing in the middle of the day. Sometimes I’ll keep working all evening. But there’s definitely a point of diminishing returns where more consecutive work is actually not helpful—then it’s time to go do something else.

Music: Yes! I get obsessed with certain songs and bands and play them over and over and over. It’s good that I don’t share my office with anyone else, because that person would have murdered me by now. There has been a lot of The 1975 on my playlists this year, and Leonard Cohen, and Kishi Bashi and The National. 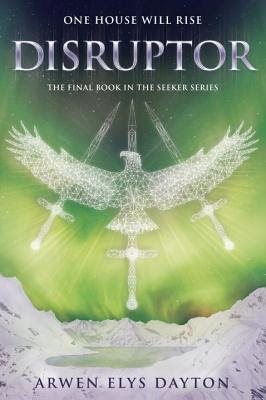 For readers of Sarah J. Maas and of Marie Lu’s Legend trilogy comes Disruptor, the sequel to Traveler, the thrilling conclusion to the Seeker series.

Quin has spent her life as her father’s pawn. She was trained to kill and manipulated to guarantee her family’s power. And now that she’s broken free of that life, she’s found herself trapped again, hostage to a plot that has been centuries in the making.

It’s taken generations for the pieces to come together, and finally all is in place. Her best friend Shinobu’s mind has been corrupted, the Young Dread has aligned with her enemy John, and the bloodthirsty Watchers are being awakened and gathered. Now there is nothing that can stop the force of time.

But Quin will no longer be a pawn. Quin is a Seeker. She stands for light in a shadowy world. She will face the vengeance of the past and its enemies and save herself and the ones she loves, or she will die trying.

Arwen Elys Dayton spends months doing research for her stories. Her explorations have taken her around the world to places like the Great Pyramid (which she explored by a single fading flashlight when researching Resurrection), Hong Kong and its many islands, and lots of ruined castles in Scotland. She enjoys creating complete worlds inhabited by characters who charm, frustrate or inspire. Arwen lives with her husband and their three children on the West Coast of the United States. You can follow her @arwenelysdayton on Twitter and Instagram, or reach her by email at arwenelysdayton@gmail.com.
---

Have you read DISRUPTOR yet? Are you nervous about jumping off the metaphorical cliff? What is keeping you from jumping? Are you also inspired by The 1975? Are there any particular go to artists you play while writing? Share your thoughts about the interview in the comments!