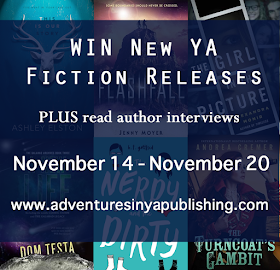 This is Our Story
by Ashley Elston
Signed Hardcover plus Swag Giveaway
U.S. Only
Disney-Hyperion
Released 11/15/2016

No one knows what happened that morning at River Point. Five boys went hunting. Four came back. The boys won’t say who fired the shot that killed their friend; the evidence shows it could have been any one of them.

Kate Marino’s senior year internship at the District Attorney’s Office isn’t exactly glamorous—more like an excuse to leave school early that looks good on college applications. Then the DA hands her boss, Mr. Stone, the biggest case her small town of Belle Terre has ever seen. The River Point Boys are all anyone can talk about. Despite their damning toxicology reports the morning of the accident, the DA wants the boys’ case swept under the rug. He owes his political office to their powerful families.

Kate won’t let that happen. Digging up secrets without revealing her own is a dangerous line to walk; Kate has her own reasons for seeking justice for Grant. As she and Stone investigate—the ageing prosecutor relying on Kate to see and hear what he cannot—she realizes that nothing about the case—or the boys—is what it seems. Grant wasn’t who she thought he was, and neither is Stone’s prime suspect. As Kate gets dangerously close to the truth, it becomes clear that the early morning accident might not have been an accident at all—and if Kate doesn’t uncover the true killer, more than one life could be on the line…including her own.

Author Question: What is your favorite thing about This is Our Story?

My favorite thing about THIS IS OUR STORY is probably the format. The story is told through two different perspectives, one of them unreliable, transcripts, text messages and police interviews. It was really fun to write! I also really loved diving into the legal aspects associated with the crime in this book. I had so many awesome lawyer friends help me figure out how the River Point Boys could (maybe) get away with murder. And that cover -- I'm really in love with that cover.

Die for You by Amy Fellner Dominy: Kelly M
Jess, Chunk, and the Road Trip to Infinity by Kristin Elizabeth Clark: Caitlin M
The Infinity of You & Me by J.Q. Coyle: Susan L
All in Pieces by Suzanne Young: Jenny M

When the tail of the comet Bhaktul flicks through the Earth's atmosphere, deadly particles are left in its wake. Suddenly, mankind is confronted with a virus that devastates the adult population. Only those under the age of eighteen seem to be immune. A renowned scientist proposes a bold plan: to create a ship that will carry a crew of 251 teenagers to a home in a distant solar system. Two years later, the Galahad and its crew―none over the age of sixteen―is launched.

In Cosmic Storm, sixteen-year-old commander Triana Martell has disappeared. Not knowing if she is alive or dead, the crew must hold an election to replace her. Council member Gap seems the most likely candidate until an old flame shocks him by adding her name to the ballot. In The Galahad Legacy, the crew comes face-to-face with extraterrestrial life. An ambassador of an alien race comes to them with a proposal that could be their only hope for survival. And it comes at an astronomical price. Beset with doubts and surrounded by danger, can the crew of Galahad find a way to reach their destination--a new home for the human race?

The Comet’s Curse, now collected in The Galahad Archives Book One: Leaving Earth, is on the American Library Association’s Popular Paperback for Young Adults list.

Orion is a Subpar, expected to mine the tunnels of Outpost Five, near the deadly flash curtain. For generations, her people have chased cirium—the only element that can shield humanity from the curtain’s radioactive particles. She and her caving partner, Dram work the most treacherous tunnel, fighting past flash bats and tunnel gulls, in hopes of mining enough cirium to earn their way into the protected city.

But when newcomers arrive at Outpost Five, Orion uncovers disturbing revelations that make her question everything she thought she knew about life on both sides of the cirium shield. As conditions at the outpost grow increasingly dangerous, it’s up to Orion to forge a way past the flashfall, beyond all boundaries, beyond the world as she knows it.

Twelve days and twelve nights in Hollywood with Hayes

Hayes Grier has just landed his first big Hollywood role, the lead in a big budget blockbuster film. There he meets Violet Reeves, an aspiring writer, who has also been given her first big break. If she aces her new job as Hayes’s assistant on the film, which means making sure he is on time, knows his lines, and doesn’t get himself killed, the director will read Violet's own screenplay.

The only problem? Violet has a huge crush on Hayes. She has to keep her emotions in check, impress Hayes, and add some heart to her script. But what about Violet’s heart? Does Hayes feel the same way about Violet as she does about him?

Social media superstar Hayes Grier sets this story, based on the hit Episode story, during the hot days and long nights of a Hollywood shoot.

In addition to this novel, fans will get an exclusive, never-before-seen Q&A with Hayes, A Perfect Day with Hayes, and some family photos!

Nicole Morgan has been labeled many things — the geeky music girl, the shy sidekick to Miss Popularity, and the girl with the scar. Now only one name haunts her through the halls of Oyster Bay Prep.

The Girl in the Picture.

After high school heartthrob Chace Porter is found dead in the woods near the school, the police are in search of the girl whose picture with Chace is the only clue found amongst his personal belongings. A girl who no one knew was even close to Chace–and whose dormmate, Lana Rivera, was Chace's girlfriend.

Nicole is that girl and now she's the primary suspect in his murder.

But what really happened that night? Were Nicole and Chace dating behind Lana’s back; were he and Lana over? Could either of them have killed him?

Told in alternating points of view, that of our suspect, Nicole Morgan, and her former best friend and roommate, Lana Rivera, readers will piece together the story of a starcrossed love, a fractured friendship–and what really happened the night Chace was killed.

From Alexandra Monir, author of the popular time-travel novel Timeless, comes a gripping mystery and a poignant romance in one thrilling read.

Pen Lupo is sick and tired of hiding who she is. On the outside, Pen is popular, quiet, and deferential to her boyfriend. On the inside, however, Pen is honest, opinionated--and not quite sure that she's like other girls. Do they have urges like she does?

His classmates may consider him a nerd, but Benedict Pendleton knows he's destined for great things. All he has to do is find a worthy girlfriend, and his social station will be secured. Sure, Benedict is different--but that's what he likes about himself.

When fate intervenes, both Pen and Benedict end up at the same vacation resort for winter break. Despite their differences, the two are drawn together. But is there such a thing as happily ever after for a nympho and a nerd?

What if America had lost the Revolutionary War? And now lived in constant fear and oppression? From the bestselling author of Nightshade, this is the action-packed final chapter of The Inventor's Secret trilogy

Charlotte has spent her whole life fighting the British Empire, following in the footsteps of her parents and their group of rebels. But when her reunion with her mother laid bare horrible truths about the rebellion, Charlotte knew she had to escape. Now she is on the run, with no idea who the enemy is--or which of her compatriots is truly on her side.

In this action-packed conclusion to the Inventor's Secret trilogy, full of swashbuckling pirates and young ladies who can hold their own against them, Charlotte will need to fight for her life and for her beliefs -- whatever they might be.