Today we're lucky to invite Karen Fortunati, author of THE WEIGHT OF ZERO, to the blog where she discusses never giving up and gaining a new driver.

"I distinctly remember sitting on my little bathroom stool and saying out loud to myself: “It doesn’t look like this writing thing is going to pan out. So now what?” That’s when I decided. I wouldn’t quit. That was never an option."

I decided to write a novel in the fall of 2009. I was feeling pretty confident. So what if I majored in accounting, practiced law and had never written one word of fiction? The whole thing seemed pretty straightforward. Everyone always said I was a good writer. Plus, my schedule was wide open based on an unexpected rejection from an alternative route to teaching program. Having the time to bang out a novel was the silver lining to the end of a career that never even started.

So I jumped into writing, brimming with the best idea ever for a middle grade fantasy. I had it all planned out: the books, the movies and the ride at Universal.

Fast forward to 2013. I was no longer brimming. For four years, I had conferenced, critiqued, retreated, workshopped and queried my masterpiece up the wazoo. I had stopped tracking my rejections in any organized fashion; now I just moved the reeking offender to my ever-growing “Query Rejects” folder. My phone still remained within three feet of my hands but now my heart sunk even before I opened an agent response.

"Each rejection stung more than the last and my confidence, not just as a writer but as a person, began to slide. It took an epiphany in my bathroom to change things."

I had just gotten out of the shower when my phone chimed. Standing there, draped in a towel in the muggy air, I read rejection number fifty-something. I realized that I just couldn’t do it anymore. That this writing thing was costing me too much. That the weekly round of “no’s” was taking some of my soul. I distinctly remember sitting on my little bathroom stool and saying out loud to myself: “It doesn’t look like this writing thing is going to pan out. So now what?”

That’s when I decided. I wouldn’t quit. That was never an option. But writing would just have to slide over to the passenger seat. There was going to be a new driver. It took some time figuring out exactly what that passion would be. I realized that spurring the writing of my MG story and my teaching aspirations was a love of history and a sense of joy whenever I was in a museum. So I went back to school for a graduate degree in American Studies with the goal of working in a museum.

Returning to school was a game changer for me. With phenomenal professors and coursework that I loved, my confidence rebounded. My writing improved significantly but most importantly, going back to school put writing in its proper place in my life. It no longer was the arbiter of worth – it was simply a dream, a goal and something I was going to continue to do. My soul healed.

During this time, I continued writing. But on a different story. In the fall of 2013, I attended a writing retreat run by my SCBWI friend, Kathy Temean, who encouraged me to draft something new for a first page session. That first page was The Weight of Zero. I felt a different energy as soon as I started writing in Catherine’s voice. It was thrilling. I thought about her for months before I started typing, letting the story deepen and falling in love with it. In early 2014, buoyed by my very first contest win (Serendipity Literary’s First Page contest), I finally put aside my MG manuscript and dove into The Weight of Zero.

"All the workshops and critique groups had improved my writing but the biggest factor in 2014 was the amount that I read."

My writing soared and I felt the difference immediately as I typed. It was confidence from a number of sources – school, contest and equally as critical, a much firmer grasp on the mechanics of storytelling. All the workshops and critique groups had improved my writing but the biggest factor in 2014 was the amount that I read. In the eleven months it took to write The Weight of Zero, I read/listened to contemporary YA constantly. Because of my schedule, I basically lived in the car, and my librarians were amazing at filling my requests for audio books. I listened to first chapters over and over, quizzing myself on mood and tension, what I knew about the main character, and why I was propelled or not propelled to read on. I’d gauge my emotional response and then review the text again to see how the author accomplished all of it. This analysis would continue throughout each book.

When I started querying Weight, it was with a newfound tenacity and writing Teflon. I had found my patron saint of querying - author Kathryn Stockett (see this amazing interview for inspiration here) and felt better equipped to handle the inevitable rejections. I could feel that I was getting closer. And I finally truly embraced the old adage: “All it takes is one yes.” About a month after I completed The Weight of Zero, I queried agent Sara Megibow and a few weeks later, she made an offer and a few weeks after that, she sold the book to editor Kate Sullivan at Delacorte/Penguin Random House.

So my most important piece of advice is this: don’t be like the 2009-2013 writer version of me. At conferences, do not focus solely on the bottom line of whether you received a request for the full. Instead, keep track of the nature of the comments and try to learn from that. See if you can chart any difference. I went from being questioned about internal character arc (I didn’t have an answer because I didn’t quite know what an internal arc was) to the comment: “I think you can get published but this is not the story.” For years, all I remembered was the last phrase. Enjoy the special kinship you share with other writers. I remain astonished at the incredible support of the writing community and so grateful for the friendships I have made. Above all, do not let this writing thing become any measurement of your self-worth. Please. Save yourself some needless aggravation/heartache and focus your precious energy on improving. You’ll get there! 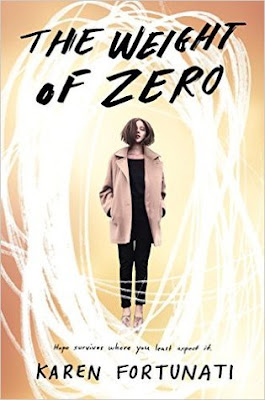 Seventeen-year-old Catherine Pulaski knows Zero is coming for her. Zero, the devastating depression born of Catherine’s bipolar disease, has almost triumphed once, propelling Catherine to her first suicide attempt. With Zero only temporarily restrained by the latest med du jour, time is running out. In an old ballet shoebox, Catherine stockpiles medications, preparing to take her own life before Zero can inflict its own living death on her again.

But Zero’s return is delayed due to unexpected and meaningful relationships that lessen Catherine’s sense of isolation. These relationships along with the care of a gifted psychiatrist alter Catherine’s perception of her diagnosis as a death sentence. This is a story of loss and grief and hope and how some of the many shapes of love – maternal, romantic and platonic – impact a young woman’s struggle with mental illness. 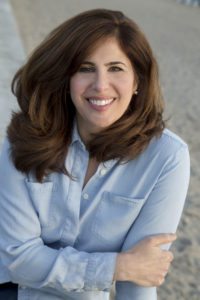 Karen is a writer of contemporary, realistic YA. The subject of her first book, THE WEIGHT OF ZERO, is mental illness, specifically bipolar disorder, and it explores the shame, stigma and anxiety that often complicate the management of this chronic condition. The issue is personal to her having witnessed the impact of depression and bipolar disorder in relatives and friends. Her goal was to write a story of hope for teens who struggle with mental illness.

Karen has been featured in SEVENTEEN MAGAZINE, September 2016 and she has also received recognition as a Barnes and Noble 2016 Most Anticipated Debut and an Amazon Editors Favorite YA Book for Fall 2016.