Using Questions to Engage Your Reader


On October 20th, we will be hosting another round of Red Light/Green Light, a writing competition in which the opening lines of your novel will be judged by an agent, with a chance at winning agent feedback. Leading up to the contest's opening day, we've been looking at ways to write openings that really grip a reader. You can find previous tips and advice here and here.

Today we're going to break down two particular opening passages and explore the methods they use to capture a reader's attention. We will look at how both openings

in order to keep readers engaged from page one.

First, let's take a look at the openings paragraphs from Anna-Marie McLemore's THE WEIGHT OF FEATHERS. 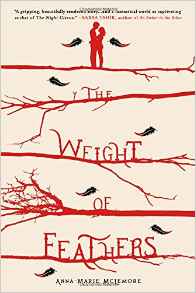 The feathers were Lace's first warning. They showed up between suitcases, in the trunk of her father's station wagon, on the handles of came-with-the-car first-aid kits so old the gauze had yellowed. They snagged on antennas, turning the local stations to static.

Lace's mother found a feather in with the family's costumes the day they crossed into Almendro, a town named for almond fields that once filled the air with the scent of sugary blossoms and bitter wood. But over the last few decades an adhesive plant had bought out the farms that could not survive the droughts, and the acres of almonds dwindled to a couple of orchards on the edge of town.

The wisp of that black feather caught on a cluster of sequins. Lace knew from the set to her mother's
eyes that she'd throw the whole mermaid tail in a bucket and burn it, elastane and all.

There a number of questions you need to answer in your opening paragraphs in order to grab and keep a reader's attention. Who is this book about? What sort of a book is it? Where is it set? What's the central conflict?

As you can see above, all these questions are deftly answered in the first few lines of THE WEIGHT OF FEATHERS. The book is about Lace, and also about her mother. We can expect that it will be at least somewhat fantastical, due to the quality of the feathers described, which appear in odd places and turn radio to static. The book is set in southerly location, as almond orchards are referenced. And given the strong reaction Lace's mother has to the appearance of the feathers, we know that they will in some way be related to central conflict.

Besides just answering questions, however, these paragraphs do a great job of also

What sort of feathers are these? They're obviously not regular bird feathers. What do Lace and her mother do that requires being on the road with costumes, one of which is a mermaid's tail? Why do the feathers illicit such a strong negative reaction from Lace's mom?

Let's take a look at another opening passage which does a great job of creating interest by both answering and raising questions: the beginning of THE GIRL FROM EVERYWHERE, by Heidi Heilig. 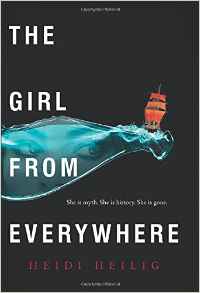 It was the kind of August day that hinted at monsoons, and the year was 1774, though not for much longer. I was in the crowded bazaar of a nearly historical version of Calcutta, where my father had abandoned me.

He hadn't abandoned me for good--not yet. He'd only gone back to the ship to make ready for the next leg of the journey: twentieth-century New York City. It was at our final destination, however, where he hoped to unmake the mistakes of his past.

He never said as much, but his willingness to leave me behind was plain: here I was, alone, haggling for a caladrius with a pitiful amount of silver in my palm. Part of me wondered whether he'd care if I returned at all, as long as the mythological bird was returned to the ship.

The beginning of THE GIRL FROM EVERYWHERE answers the same basic questions every introduction must in order to orient the reader. Who is the book about? Well, we don't know the narrator's name yet, but we know she's young, and lives/works aboard a ship. What sort of book is this? We can tell by the references to time travel and mythological creatures that this is a fantasy. What's the setting? We would assume the ship, and various destinations our narrator will travel to. Central conflict? It looks as if the narrator's troubled relationship with her father will be important to the story, and her uncertainty of where she stands with him.

There are plenty of questions raised by this introductory passage. Why/how are the characters able to time travel? Why does the narrator consider herself to be one of her father's mistakes? How does he plan to undo his past mistakes, and what were they? Why would he want to abandon his daughter? What sort of business does the crew of the ship conduct, that they'd be taking on mythological creatures as part of their cargo?

As you can see, part of creating interest for a reader in your opening paragraphs is not just answering questions in order to orient them, but also bringing up new questions, which they will want to read on to find answers to.

Happy revising, and best of luck in our upcoming contest!
Adventures in YA Publishing at 7:42 AM