Shonna Slayton, author of SPINDLE, on diving in and exploring feelings

We're thrilled to have Shonna Slayton join us to chat about her latest novel SPINDLE.

Shonna, what was your inspiration for writing SPINDLE? 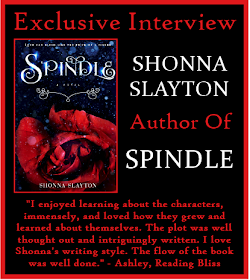 For my novels, I take a fairy-tale object and put it in a different time and place. When I thought about Sleeping Beauty and the spindle, I brainstormed different ways the spindle could be used. My first books were based on Cinderella, and the dress and the shoes were both objects someone would want to inherit. But a cursed spindle? No way. My thought process went like this:

Okay. So that gave me the purpose of the fairy-tale object, and the goal of the antagonist.

Next. What time and place in history shall the spindle reappear?

It seemed pretty obvious to focus on the spinning mills during the Industrial Revolution, so that gave me the time period. But what about the place? England? America?

With Cinderella, I brought the fairy-tale heirlooms to America. Should I do the same with the spindle? Sleeping Beauty is traditionally a German tale, so I’d need to come up with a reason that the spindle ends up in America….and then things get interesting!

Not a particular scene, but an entire plot line was really hard to write! At the beginning of the story, Briar is coming off of a breakup. She thought her relationship was headed to marriage, but it ended abruptly and she’s dealing with the hurt. I was trying to downplay her heartbreak with her ex, but with each round of edits my editors had more and more questions, especially since he is still in the picture. I hadn’t provided enough details for Briar’s thoughts, feelings, and actions toward Wheeler to make sense. I had been holding back because I didn’t want to create anything that even remotely looked like a love triangle. I couldn’t scrap the plot line, as what happens with it is part of Briar’s character arc. So, I dove in and explored Briar’s conflicted feelings over a romance gone wrong. We were making changes to this plotline right up until the end of edits.

How long did you work on SPINDLE?

Spindle was the fastest book I’ve ever written. I first came up with the idea in early spring 2015, and the first draft was due Dec 1. We finished the final proofread early August 2016. A bit of a whirlwind for me, but in the end there is only one scene I’d like to change…I thought of a slightly better way to write it after the copy edits were finished. Don’t you hate it when you press “Send” and then a few hours later you think of something else?

What do you hope readers will take away from SPINDLE?

Set during the Industrial Revolution, Sleeping Beauty's happily ever after isn't the end of the story...

Briar Rose knows her life will never be a fairy tale. She’s raising her siblings on her own, her wages at the spinning mill have been cut, and the boy she thought she had a future with has eyes for someone else. Most days it feels like her best friend, Henry Prince, is the only one in her corner…though with his endless flirty jokes, how can she ever take him seriously?

When a mysterious peddler offers her a “magic” spindle that could make her more money, sneaking it into the mill seems worth the risk. But then one by one, her fellow spinner girls come down with the mysterious sleeping sickness—and Briar’s not immune.

If Briar wants to save the girls—and herself—she’ll have to start believing in fairy tales … and in the power of a prince’s kiss.

SHONNA SLAYTON writes historical fairy tales for Entangled TEEN. Cinderella's Dress and Cinderella's Shoes, set in the 1940s are out now. Spindle, a Sleeping Beauty inspired tale set in the late 1800s, will be out October 2016.

She finds inspiration in reading vintage diaries written by teens, who despite using different slang, sound a lot like teenagers today. When not writing, Shonna enjoys amaretto lattes and spending time with her husband and children in Arizona.

Have you had a chance to read SPINDLE yet? Do you find yourself holding back on certain plot lines? Will you always be thinking of ways to improve your book after it's 'done'? Share your thoughts about the interview in the comments!