ILLUSION Is On Shelves Now! + A Celebration Teal Cover Giveaway!!!! 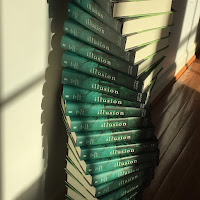 The final book of the Heirs of Watson Island trilogy is here, and I'm so excited to finally get to unveil the full magic and mystery and share the resolution to Barrie and Eight's story and all the tangled relationships.

If you want a signed or personalized copy, with swag, for any of the books, here's your last chance to get your order in through tonight at One More Page Books in Arlington, VA. And if you're in the DC area, join us for a beach party Watson Island style!

This book was such an incredible ending to an amazing, complex, and beautiful series. I love this series, I love these characters, and I love the way this book made me think about the world and all the issues we face every day. Brilliant.

The conclusion to this gothic trilogy of love and folklore goes above and beyond its predecessors to bring the reader even more magic, more family history, and — hard to believe if you’ve read the first two — more edge-of-your-seat action. Every character has more depth accompanying growth, and Boone masterfully explores family history while propelling the story forward at a healthy clip. Authors take note: when bringing a series to a powerful close, Illusion shows how it’s done.

A fabulous crescendo for the Heirs of Watson Island series! Martina Boone delivers a rich, satisfying, thoughtful conclusion to the story of Barrie, Eight, Pru, and all the other characters we’ve come to love throughout this beautifully crafted Southern Gothic trilogy. I loved how she tied together all the complex aspects of history and mythology to create a story that makes you really think about the nature of perspective in history and the voices whose stories have been silenced over the years.

Wow! A beautifully written finale and the perfect ending to an amazing series! I loved every page and dreaded them at the same time since I didn’t want this book to end. And of course it made me hungry for Southern food just like the other 2 books did! I’m really going to miss this world and Barrie & Eight. Bravo Martina on a brilliant finale!

Compulsion hooked me, Persuasion swept me off my feet, and Illusion reminded me of why I fell in love with this captivating series. Reading the Heirs of Watson Island series is like reading a story that has been passed down for generations. It hooks you with its Southern Gothic charm and intoxicating romance. Enchants you with its magic, history, legend and mystery. Makes you fall in love with its characters and Boone’s beautiful writing. Most importantly, it will make you ponder the history, the magic, and the real possibility of it all. The past and present collide perfectly to give readers a beautiful ending to a fantastic series!

A great ending and a swoony Eight is my favorite kind of Eight… You guys – have you started reading The Heirs of Watson Island series? If you haven’t…you need to fix that immediately.

Eight and Barrie continue to have that push and pull romance that I have come to adore with this series. It’s not over the top love at first sight but more of a longing and need and pull to be together because there is just no way they can be apart. Boone does a nice job of wrapping up all the story lines in this series. I wasn’t left worrying about anyone and what was happening to them. The mysteries of the island come to a head and the explanation of the Fire Carrier and the bindings is revealed. A perfect finale for this series!

Three hundred years ago, an ancient spirit cursed one of the founding families of Watson Island and gave the other two magical gifts that became compulsions. Arriving for the first time at her aunt’s plantation home, Barrie Watson finds herself haunted by the ghosts of a generations-old feud and hunted by forces she can’t see. With the help of Eight Beaufort, who seems to know what she wants before she knows herself, the last Watson heir starts to unravel her family's twisted secrets. What she finds is dangerous: a love she never expected, a river that turns to fire at midnight, a gorgeous cousin who isn’t what she seems, and very real enemies who want both Eight and Barrie dead.

As reporters chasing rumors of a stolen shipment of Civil War gold descend on Watson Island, Barrie Watson discovers more is buried at Colesworth Place than treasure. A mysterious, magical man claims the key to the Watson and Beaufort gifts and the Colesworth curse also lies beneath the mansion, and Barrie has no option but to help him find it. While she and Eight Beaufort struggle to make sense of the escalating danger and their growing feelings for each other, Barrie must decide not only whom to trust, but which gift is more reliable—Eight’s or her own. With the fate of the founding families at stake, she has to choose between what she feels deep in her heart and what will keep her loved ones safe. 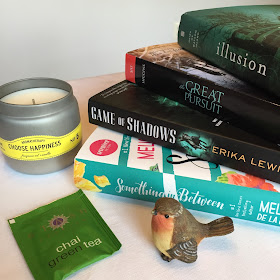 
Win a finished set of the three books of the Heirs of Watson Island trilogy, including ILLUSION plus an ARC of Wendy Higgin's delicious GREAT PURSUIT, plus an ARC of Erika Lewis' exciting GAME OF SHADOWS, plus a finished copy of Melissa de La Cruz's SOMETHING IN BETWEEN.