Carol Lynch Williams, author of MESSENGER, on caring about your words, story, and characters

We're delighted to have Carol Lynch Williams here to share more about her latest novel MESSENGER. 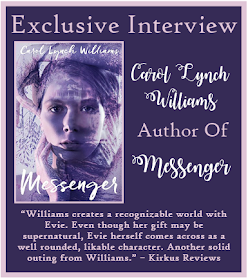 Carol, what was your inspiration for writing MESSENGER?

I remember when the idea first came to me for MESSENGER. It was, of course, just a seed, an emotion.

Okay, how many times do you go to a public restroom and have to wave your hand under a sensor to turn on the water or get paper towels out of the dispenser and nothing happens?

One day, after practically dancing in front of an automatice paper towel dispenser and getting nothing, I thought, why is it that these things never detect me? Am I a ghost? And that sparked the idea. I could see a girl trying, without success, to wash her hands. The reason? She’s dead, but doesn’t know. She was clear in my mind. That was years before I sat down to write the book, but that picture of her--at the bathroom sink--stayed in my head.


How long did you work on MESSENGER?

I’d say 6-8 months getting the draft ready to go to my editor. The story is fun, with lots of crazy, happy characters so it was far easier to write than some of my sad books. And as I wrote, I remembered many of the people who were in my life when I was a kid in New Smyrna beach, FL. My aunt Odie was so awesome. She had a deep freeze on the wrap-around front porch of her house. I would open the freezer and stick my head in and it smelled like treats--something my sister and I rarely got. Aunt Odie had Fred and Marsha, two pink flamingoes made from plaster, standing under her live oak in the back yard (Fred and Marsha debut in my first book KELLY AND ME.). And the experience with the girdle really did happen to Aunt Odie.

What do you hope readers will take away from MESSENGER?

I hope they have fun! This book, like all my novels, is about family. It’s a happy story about food and family and love. There’s some kissing and a little haunting and a little mystery. My wild family on my grandmother’s side, they sparkled with personality. But as I discovered a hidden past, I felt the need to share people who didn’t live long. In true life, Tommie was my great aunt Evie’s twin sister who died at birth. I wondered about that infant who was never spoken of. My version of her ‘lives’ in the MESSENGER.

I have about thirty books published. THE CHOSEN ONE and WAITING and NEVER SAID are three more recent titles. I try to spend writing energy on novels that I feel have potential. I am trying to teach myself how to write picture books (I have 4 I haven’t been able to sell). A good picture book is a work of art and I just can’t seem to get a handle on them. I need 45,000 words, not 500!

Write from your heart. Care about the words, the story, the characters. Caring about what you’re doing will get you through the tough parts of the novel. And if you care, your reader will care.

This is an exciting question to answer. I love starting books! There is so much potential and promise.

I’m working on two projects with friends. One is an adult murder mystery I think could turn into a series.

The other is a middle grade novel. Ann Dee Ellis (THE END OR SOMETHING LIKE THAT) is my neighbor and we actually have two other projects in mind, as well.

I’m doing a big rewrite of a middle grade about sisters who have to care for themselves because of their mom’s depression when their dad leaves.

I’ve begun a mid-grade about two girls who want to be ‘wrasslers’ (set in the 60‘s) and I’m writing my first YA murder mystery.

That’s a lot of projects, I know, but they are all at different stages of writing. Two are being rewritten. One I’m writing notes for. One I’m brainstorming on. One is the first draft stage. It’s fun! 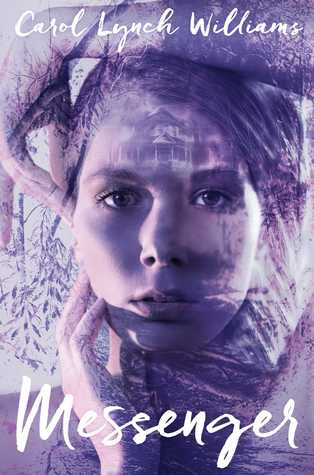 Evie Messenger knows that her family is different from other families. But it isn’t until her fifteenth birthday that the Messenger gift is revealed to her. Evie has the family’s gift—a special power. Soon she realizes she is able to see and talk to the dead—ghosts—often with no idea who the person was. Or as Evie says: “I see Dead People. It’s a Messenger gift.” That doesn’t mean she wants the Messenger gift. So Evie tries to ignore it but soon she finds she cannot. Can Evie find a way to live her life without letting her power take over? And what if the dead person is someone close to Evie’s family? 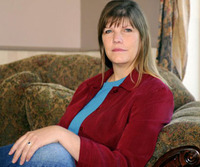 Carol Lynch Williams, a two-time winner of the Utah Original Writing Competition, is the author of several books for children, including two novels about the Orton family of New Smyrna, Florida: Kelly and Me and Adeline Street. A starred School Library Journal review of The True Colors of Caitlynne Jackson praises Williams as she "again demonstrates her facility at mood and character development... Truer colors are hard to come by."

Her most recent novel, If I Forget, You Remember, is a moving intergenerational story that stresses the bonds that hold families together through difficult times--a help since over 19 million Americans have a family member with Alzheimer's disease.

Have you had a chance to read MESSENGER yet? Have you ever been inspired by a story while washing your hands? Do you write from your heart? Share your thoughts about the interview in the comments!