Becky Allen, author of BOUND BY BLOOD AND SAND, on burning a book down and starting over

We're pleased to have Becky Allen swing by to give us more info about her debut BOUND BY BLOOD AND SAND. 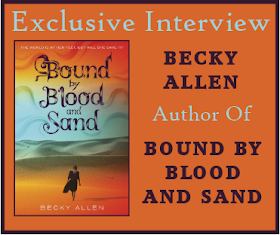 Becky, what was your inspiration for writing BOUND BY BLOOD AND SAND?

BOUND BY BLOOD AND SAND actually has a very clear origin. My older sister (who also happens to be my roommate) teaches high school global history. It's a set of classes that takes two years and culminates in a major, state-mandated exam. So she always spends the last few weeks of the year reviewing, going all the way back to the beginning, trying to help her students prepare for the test.

One of her strategies are flashcards to help with multiple choice. It's a quick way to link concepts -- to know that if a question asks about X, the answer is almost always going to be Y. When she told me about it, her X and Y examples were irrigation and civilization. In other words, if the test asks for a major factor leading to the birth of civilization, the right answer is probably irrigation.

So I began to wonder, if irrigation was a necessity for civilization to form, then in a world with magic, would they use that magic for irrigation? Would their society be centered around it? And I began to imagine a desert world that was barely surviving -- and what little bit of civilization they could eke out was only possible because they had a magical source of water. And then I asked myself: what would happen if their magic, and thus their water, suddenly went dry?

How long did you work on BOUND BY BLOOD AND SAND?

Oh, man. BOUND BY BLOOD AND SAND took me a long, long time. It's a bit lost to the mists of time, but from what I can find of my old drafts and notes, it looks like I started the very first version of the book, then tentatively titled "Oasis," in January 2010. That makes it just shy of six years between the first word and publication.

Well, as I said above, the road took about six years. It involved burning the book down and starting again -- twice. (That means it was written from the ground up three times!) I also did countless rounds of revision with the help of my critique partners, and then more once I'd signed with my agent, and yet more with my editor after it sold.

I don't regret how long it took, though. Last year, I jumped in to drafting book two, the sequel that will finish the story that began in Bound by Blood and Sand. And as tricky as writing that has been, it's also been much quicker -- because at 33, I'm a much better writer than I was when I wrote that rough, terrible first draft at 27.

But even that first version was a step forward. Bound by Blood and Sand was the first book I queried -- but not the first one I wrote. It was my fourth manuscript. The first three are resting comfortably in binders in the back of my closet. They were all too deeply flawed to fix -- and I hadn't yet learned how to rework a concept or the discipline to start again from scratch when something wasn't working.

Jae is a slave in a dying desert world.

Once verdant with water from a magical Well, the land is drying up, and no one remembers the magic needed to keep the water flowing. If a new source isn’t found soon, the people will perish. Jae doesn’t mind, in a way. By law, she is bound by a curse to obey every order given her, no matter how vile. At least in death, she’ll be free.

Elan’s family rules the fading realm. He comes to the estate where Jae works, searching for the hidden magic needed to replenish the Well, but it’s Jae who finds it, and she who must wield it. Desperate to save his realm, Elan begs her to use it to locate the Well.

But why would a slave—abused, beaten, and treated as less than human—want to save the system that shackles her? Jae would rather see the world burn.

Though revenge clouds her vision, she agrees to help if the realm’s slaves are freed. Then Elan’s father arrives. The ruler’s cruelty knows no limits. He is determined that the class system will not change—and that Jae will remain a slave forever.

Becky Allen grew up in a tiny town outside Ithaca, New York, and graduated from Brandeis University with a major in American studies and a minor in journalism. She is the website director of TheBody.com, an online HIV resource, and loves New York, brunch, and feminism. Becky lives in New York City.

Have you had a chance to read BOUND BY BLOOD AND SAND yet? Have you ever been inspired by flashcards for a history class? Have you scrapped a book to start over multiple times? Share your thoughts about the interview in the comments!